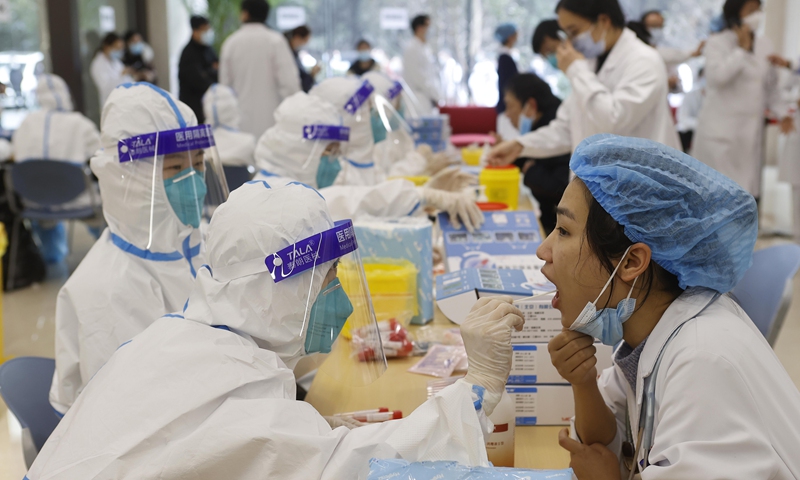 Two hospitals in Shanghai suspended their outpatient services on Wednesday and arranged for all-member nucleic acid testing, because one "abnormal result" identified among its staff members.

The Shanghai Songjiang District Central Hospital, announced on Wednesday morning that screening tests were being conducted among all related personnel and venues, in accordance with the national and the municipal epidemic prevention and control requirements, after one of its staffers returned abnormal test results in routine nucleic acid tests at the hospitals.

According to the official website of the hospital, which occupies an area of 96,000 square meters and has 805 beds. About 1.9 million visits are paid to its outpatient and emergency services annually.

The hospital currently has 1,307 registered employees.

Meanwhile, the Eye & ENT Hospital of Fudan University also suspended its service at its three branches in Xuhui and Minhang districts on Wednesday.

According to a medical worker at the hospital, the hospital received the notification to carry out all-member nucleic acid testing, and it is unknown when its services will be allowed to resume.

According to kankanews.com, the entrance to the hospital on Baoqing Road in Xuhui district has been cordoned off, and policemen and security guards were dissuading patients to visit the hospital on Wednesday morning.

The hospital is a third-tier hospital specializing in eye and ear-nose-throat treatment. As of November 2020, the hospital had a total of 1,408 workers. Patients from across the country paid over 2.48 million visits to the hospital's outpatient service in 2019.