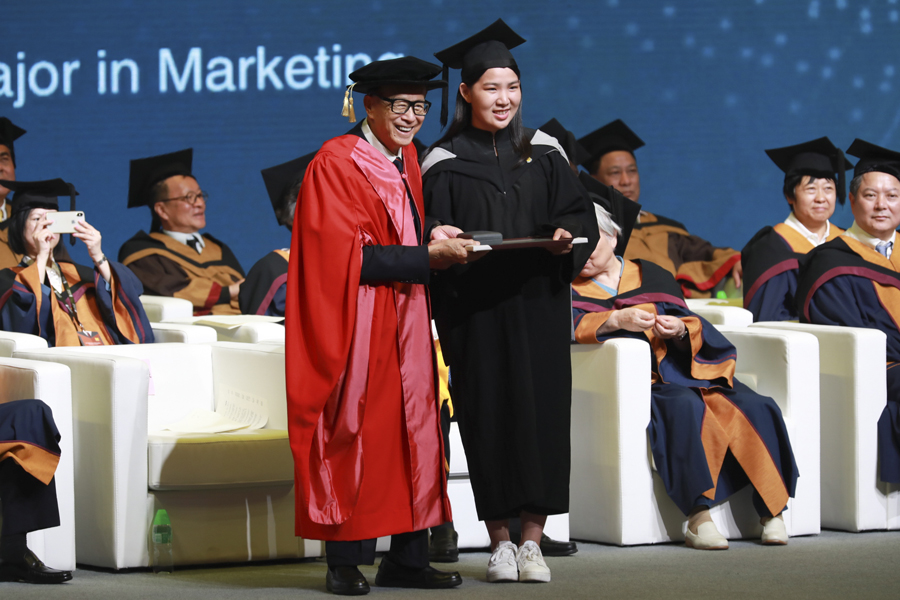 Hong Kong tycoon Li Ka-shing presents an award to Huang Yanting, one of the most outstanding graduates at Shantou University this year, at the Guangdong-based university's graduation ceremony on Friday. [Photo by CHEN CHENGXIAO/FOR CHINA DAILY]

When it comes to speeches during graduation season, few are quite as buzzworthy as the one by Hong Kong tycoon Li Ka-shing at Shantou University on Friday.

At a commencement ceremony filled with laughs and tears, Li also announced he is stepping down as honorary chairman of the university, which he established 38 years ago, and his son Richard Li Tzar-kai will continue his mission.

Li Ka-shing, who will turn 90 in July, recalled at the ceremony "where we are now was a swamp 38 years ago. Many mocked me that this was but a fool's dream. I believe then, as I believe now, that only through education can we fulfill the promise we hope for the future."

He has attended the university's commencement and delivered a speech for 17 consecutive years. It is also the latest position he has resigned since announcing his retirement from his companies, CK Hutchison and CK Asset, in May.

His charity, Li Ka Shing Foundation, has invested almost HK$10 billion ($1.3 billion) in the university in Guangdong, where Li was born before he moved to Hong Kong.

At the campus' 60,000-square-meter indoor gym, the billionaire gave a speech entitled Searching for Better to more than 2,600 graduates.

"The modern milieu is very different. The world of new challenges calls for the need to find variables with values. The uninitiated like only to bask in the comfort zone, which leads them nowhere. Things won't be disrupted unless you ask how they could be done differently," remarked Li.

The entrepreneur, affectionately dubbed "superman" by Hong Kong residents, advised students to be creative with their talents to make a change in the world, but also stressed "a functioning conscience matters as much as having talent".

After his speech, students sang the school anthem and many burst into tears.

Jiang Hong, president of the university, said Li has been taking care of the school since the very beginning and devoted his deepest love. She also mentioned that a book with Li's remarks will be sent to graduating students as a gift this year.