China is reportedly building another batch of Type 054A frigates for the People's Liberation Army Navy (PLA Navy) after it had launched two new ships of this class over the past few months, a move Chinese military observers said on Thursday was aimed at rapidly expanding the country's naval fleet amid the need to boost its combat preparedness. 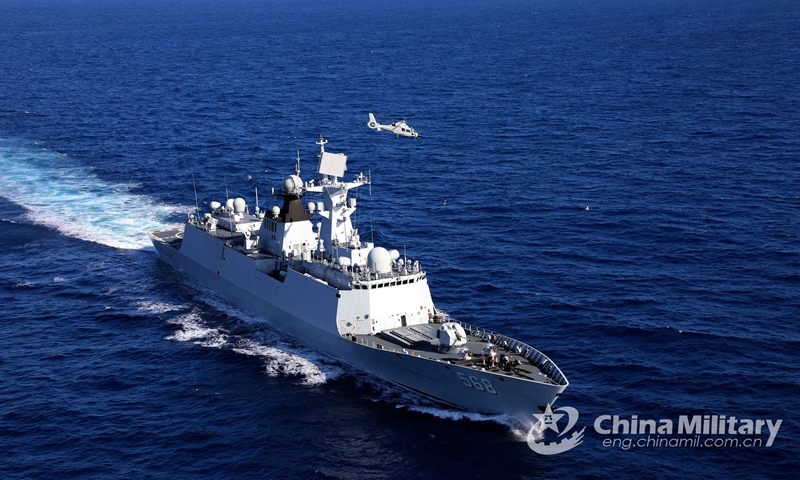 A ship-borne helicopter attached to a naval flotilla under the PLA Southern Theater Command takes off from the guided-missile frigate Hengyang (Hull 568) during a combined arms training exercise. The flotilla under training has traveled more than 8,000 nautical miles in over 30 days, conducting dozes of exercise items including air and missile defense, anti-terrorism and anti-piracy operation, and joint search and rescue. Photo: China Military Online

Citing photographs circulating on social media, UK-based defense weekly Jane's reported on Tuesday that the Hudong-Zhonghua shipyard in Shanghai recently launched the 32nd Type 054A frigate for the PLA Navy.

The ship was under construction in the same dock as the third of Type 054A/P frigate for the Pakistan Navy, and the launch for both ships likely took place on July 31, the report said, citing a navigational warning issued by the Maritime Safety Administration of China which announced that two ships would be launched on that day, but did not specify the type.

The report came after Belgium-based news outlet Navy Recognition reported in March that the PLA Navy's 31st Type 054A frigate was about to be launched in the Huangpu Shipyard in Guangzhou, South China's Guangdong Province.

The first ship of the Type 054A, the Zhoushan, entered service in January 2008, according to the Xinhua News Agency. The latest one to be commissioned, the Zaozhuang, joined military service in February 2019, China Central Television reported in March that year.

Having a displacement of about 4,000 tons and capable of conducting anti-air, anti-ship and anti-submarine operations, the Type 054A frigate is a well-balanced warship capable of not only coastal but also far sea operations, Shi Hong, executive chief editor of the Chinese magazine Shipborne Weapons, told the Global Times on Thursday.

It uses mature technologies that have been proven reliable with the previous 30 ships, as they have performed well in tasks including escort missions in the Gulf of Aden and many military exercises, Shi said.

Under the current situation that forces the PLA to enhance its combat preparedness, the Type 054A is a good choice to rapidly expand the PLA Navy's fleet also because of its lower cost compared with larger warships like destroyers, and that it can be mass-produced faster, Shi said, noting that this will also give China time to develop newer warships.