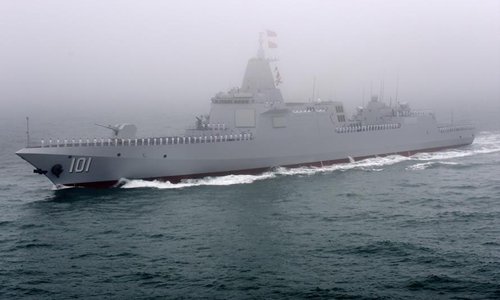 The guided-missile destroyer Nanchang of the Chinese People's Liberation Army (PLA) Navy takes part in a naval parade staged to mark the 70th founding anniversary of the PLA Navy on the sea off Qingdao, east China's Shandong Province, on April 23, 2019. (Photo: Xinhua)

They also predicted that other Type 055s will also be commissioned into the East China Sea and South China Sea fleets.

Nanchang made a brief appearance in an introduction video released by the North China Sea Fleet on Thursday afternoon.

Although the video did not elaborate, Weihutang, a column on military affairs affiliated with China Central Television, reported Sunday that the warship would likely join the North China Sea Fleet and become "one of the pillars to the fleet's combat capability."

The first Type 055 could be commissioned into the North China Sea Fleet as it can form an aircraft carrier combat group around the carrier Liaoning, Li Jie, a Beijing-based naval expert, told the Global Times on Sunday.

Nanchang could serve as lead escort to Liaoning, which is based in Qingdao, East China's Shandong Province, Li noted.

Another reason behind the naval vessel's potential commissioning in the North China Sea Fleet was that China has already commissioned other advanced warships in the East China Sea and South China Sea fleets.

Deploying the first Type 055 destroyer to the North China Sea Fleet balances up the allocation of military resources, according to Li.

With a strong air defense capability, Nanchang could protect the Chinese capital region from warplanes or missile attacks in the Yellow Sea and Bohai Sea areas, analysts pointed out.

Future Type 055s will likely also join the South China and East China fleets, Li expected, as the US have frequently sent warships to the South China Sea and across the Taiwan Straits to cause stirs under the excuse of freedom of navigation recently.