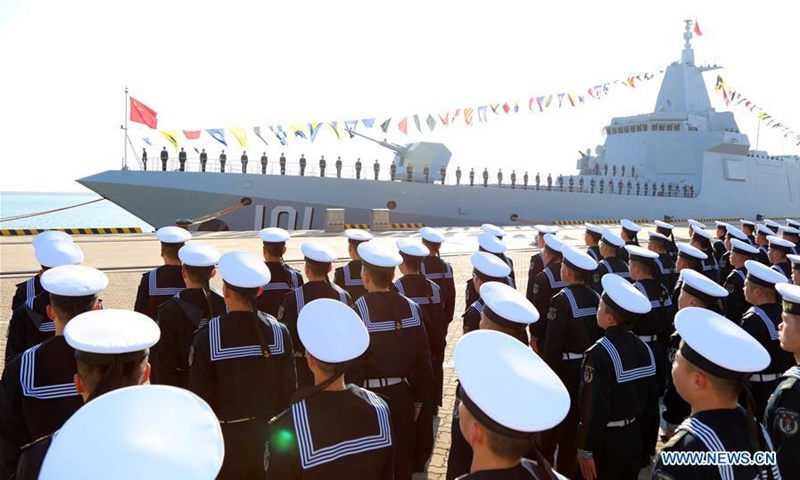 Photo taken on Jan. 12, 2020 shows the ceremony of the commissioning of the Nanchang, China's first Type 055 guided-missile destroyer, in the port city of Qingdao, east China's Shandong Province. The commission of Nanchang marks the Navy's leap from the third generation to the fourth generation of destroyers, according to a statement from the Navy. (Photo: Xinhua)

The Chinese People's Liberation Army (PLA) reportedly dispatched a powerful naval flotilla led by a Type 055 large destroyer to the Sea of Japan for the second time this year on Sunday, a move Chinese military experts said on Tuesday will send a warning to Japanese right-wing forces and militarists. The move came after some Japanese senior politicians recently honored World War II war criminals at the Yasukuni Shrine and the country released a defense paper that provoked China on questions involving the island of Taiwan and the Diaoyu Islands.

The Japan Maritime Self-Defense Force spotted a PLA Navy flotilla consisting of three warships, namely the Type 055 guided missile destroyer Nanchang, the Type 052D guided missile destroyer Guiyang and a Type 903A comprehensive supply ship with the hull number of 903, which passed through the Tsushima Strait and sailed toward the Sea of Japan on Sunday, Japan's Ministry of Defense Joint Staff said in a press release on Monday.

China had yet to announce related information as of press time.

This was the second time a Type 055 large destroyer entered the Sea of Japan. The first time was in March, when the Nanchang took a similar route together with the Type 052D guided missile destroyer Chengdu and the Type 054A guided missile frigate Daqing, according to the Japanese defense authority. The Chinese warships entered the Sea of Japan on March 18 and left on March 25, marking an eight-day exercise in the region.

By holding exercises in the Sea of Japan, the warships will boost their joint combat capabilities in the far sea, Wei said.

A Type 054A frigate accompanied the Nanchang in its first voyage in the region, and this time it was replaced by a Type 903A comprehensive supply ship. This means the PLA Navy could be experimenting with different combinations and tactics, and with the supply ship, the group could operate for an extended period, another Chinese military expert told the Global Times on Tuesday, requesting anonymity.

A second voyage to the Sea of Japan could also be an indication that similar training activities could become routine, the expert said, noting that the PLA Navy has commissioned its second and third Type 055s, the Lhasa and the Dalian, this year, with more to come.

The PLA naval flotilla's latest Sea of Japan voyage comes shortly after Japanese Prime Minister Yoshihide Suga sent an offering to the Yasukuni Shrine, which honors Class-A convicted war criminals in World War II, on August 15, the 76th anniversary of Japan's surrender. Some Japanese senior politicians recently also visited the shrine, and Japan's latest defense white paper for the first time mentioned the stability of the island of Taiwan and again hyped the situation of the Diaoyu Islands.

Wei said that many Japanese politicians still do not have a clear understanding on the history of World War II, and the Chinese military's display of its capabilities could serve as a warning and deter the Japanese right-wing forces and militarists.

With advanced weapons and equipment like the Type 055 large destroyer, the PLA is fully capable of safeguarding national sovereignty and territorial integrity, no matter if it comes to the island of Taiwan or the Diaoyu Islands, or if foreign forces interfere, analysts said.

With a displacement of more than 12,000 tons, the Type 055 is a guided missile destroyer about 180 meters long and 22 meters wide. It has 112 vertical launch missile cells capable of launching a combination of surface-to-air missiles, anti-ship missiles, land-attack missiles and anti-submarine missiles. The warship is also endowed with the capability to gain strong situational awareness, media reports said previously, leading analysts to say that the Type 055 is one of the world's most powerful warships, if not the most powerful.

A total of eight Type 055s have reportedly been built, with three known to have entered service. As the first entry to the Type 055-class, the Nanchang entered service in January, 2020, the second ship Lhasa in early 2021, and the third ship Dalian on April 23, 2021.