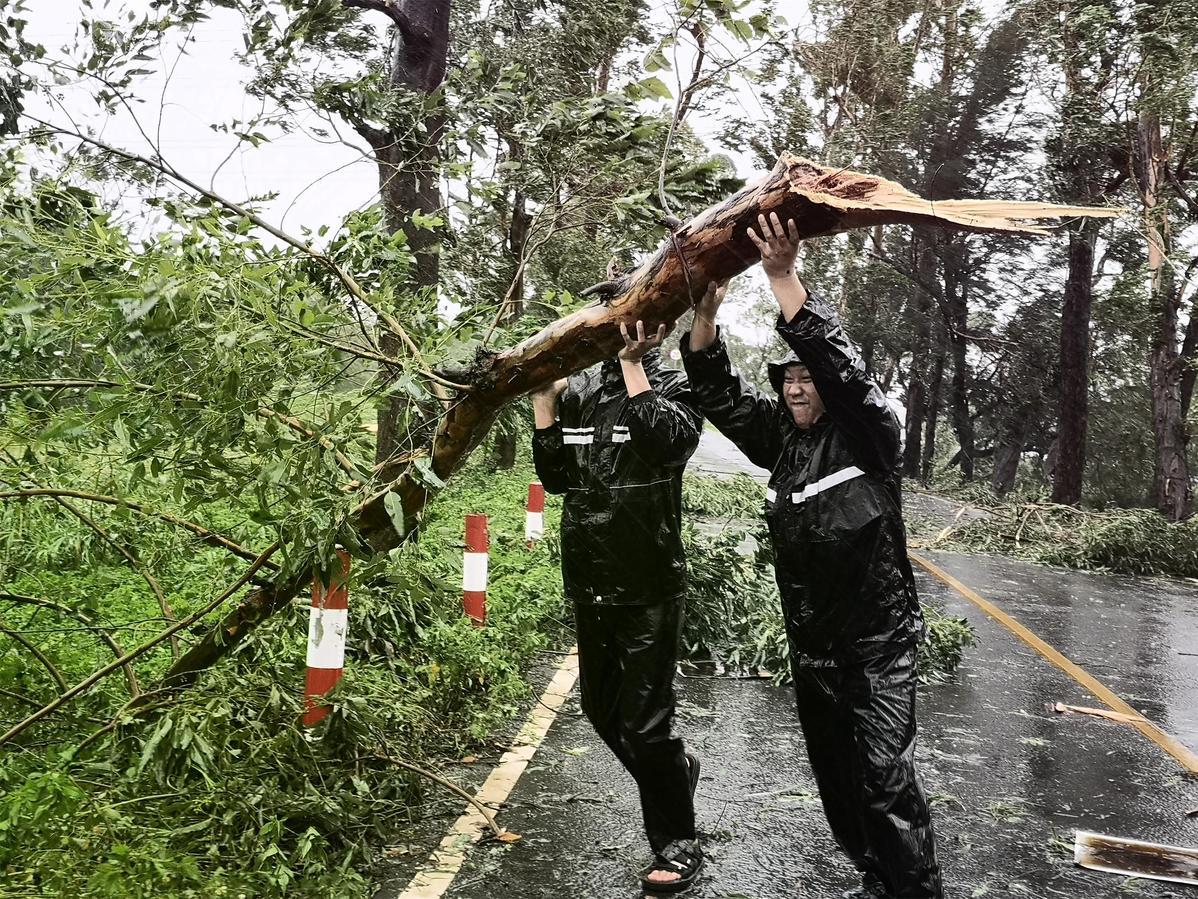 Workers remove a tree trunk snapped by Typhoon Higos in Zhuhai, Guangdong province, on Wednesday. The typhoon made landfall in the province on Wednesday morning. (Photo: Nanfang Daily)

Typhoon Higos caused floods, downed trees, damaged cars and slammed transportation services on Wednesday in major cities in the western Pearl River Delta before it weakened into a tropical storm and left Guangdong province for the Guangxi Zhuang autonomous region that night.

Higos, the seventh typhoon formed in the Pacific Ocean this year, brought air, rail, water and road traffic to a halt in Guangdong after it made landfall with maximum sustained winds of 126 kilometers per hour in Zhuhai's Jinwan district at about 6 am on Wednesday. Despite the damage, no casualties had been reported by Wednesday evening.

Intercity railway services, including the Guangzhou-Zhuhai and Jiangmen-Zhanjiang lines, and some high-speed train services between provincial Guangzhou and Shenzhen, were canceled, according to China Railway Guangzhou Group.

Some other high-speed trains departing from and arriving in Zhuhai and Guangzhou from outside the province were also canceled or delayed due to strong gales on Wednesday.

Li Ya, a worker at Guangzhou South Railway Station, said passengers could avoid lines since refunds were available until Aug 30. "Passengers can also get refunds and change their tickets online," she said.

The Hong Kong-Zhuhai-Macao Bridge, linking the three metropolises at the mouth of the Pearl River, was temporarily closed for safety reasons on Wednesday.

Thousands of passengers were affected when Guangzhou-based China Southern Airlines canceled 75 flights to or from Guangzhou, Shenzhen and Zhuhai because of the typhoon.

But ferry services across the Qiongzhou Strait restarted on Wednesday afternoon. The ferry, linking Guangdong and Hainan provinces, had been suspended starting at 7 pm Tuesday.

Some sections of highway were temporarily closed by flooding or fallen tree branches. Heavy downpours flooded some sections of roads and streets in the urban areas in Zhuhai. High winds uprooted trees and blew down billboards, damaging parked vehicles.

Zhang Hongwei, a civil servant who lives in Zhuhai's Xiangzhou district, said he was awakened by the storms at about 6:30 am.

"I saw many umbrellas that had been blown away, as well as many tree branches broken by the strong gales. A neighbor was drenched by the rain when she got home from shopping," he said.

Zhang said he was told to stay home as the city government shut down its departments as well as companies and schools on Wednesday.

Zeng Fanwei, owner of a small restaurant, said electronic equipment was damaged by flooding, causing him losses of more than 10,000 yuan ($1,450).

"It will take me more than a dozen days to repair and restore the restaurant to reopen for business," he said.

Besides Guangzhou, Jiangmen, Yangjiang and Yunfu in Guangdong province were battered by Higos' gales on Wednesday. The education department in Guangzhou's Haizhu district issued a notice that all the schools and kindergartens were to suspend classes on Wednesday.

Lu Shan, chief forecaster at the Guangdong Meteorological Bureau, said Guangzhou and major cities in the Pearl River Delta would continue to experience some heavy downpours on Thursday and Friday, although Higos had weakened and was moving westward.

Temperatures in the Pearl River delta cities were forecast to gradually climb back above 37 C over the weekend, Lu said.

Guangdong's provincial government urged departments and cities to take effective and concrete measures to prevent landslides, flash floods in mountainous areas and other possible natural disasters caused by Higos in the coming days.