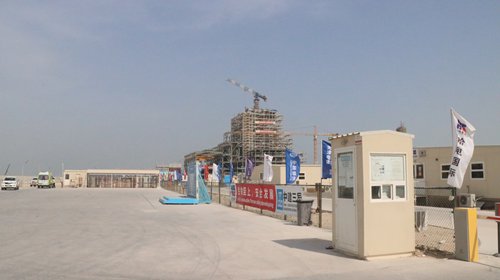 With two major energy projects in Dubai functioning as a narrative to the comprehensive capability of Chinese businesses beyond purely getting the job done in a quick and cost-effective manner, there's a growing belief that Chinese companies venturing into overseas markets would become hotly pursued as quality growth enablers, epitomizing the Chinese economy's shift toward a more balanced growth.

Situated in the area of Saih Shuaib on Dubai's border with Abu Dhabi, and part of the Jebel Ali Wildlife Sanctuary, the Hassyan Clean Coal Power Plant now being built bears witness to the rise of Chinese businesses as truly sophisticated investors who focus primarily on inclusive and sustainable growth.

The 2,400-MW clean coal-fired facility - the first of its kind in the Middle East - is a key project exemplifying Dubai's effort to remodel its energy structure, Duan Tengfei, manager of the project, told the Global Times.

The power plant, among other projects typifying cooperation between China and the United Arab Emirates (UAE), was in the limelight during Chinese President Xi Jinping's State visit to the Middle Eastern country from July 19 to 21.

Dubai, the commercial hub of the UAE, still relies on natural gas imports for power generation, but it has set its integrated energy strategy for decades to come, aiming to gradually expand the share of power produced from renewable energy.

Through an engineering, procurement and construction (EPC) partnership with GE, Harbin Electric International Co has secured a crucial interest in the high-profile project that's intended to ensure energy supplies during the World Expo to be held in Dubai in 2020-21.

In a sign of its efforts well beyond those of a traditional EPC, Harbin Electric, since the start of the construction phase at the end of September 2016, has devoted itself to transplanting some 28,000 corals in the area of construction into adjacent waters, relocating all the fishes in the lagoon into the sea, as well as monitoring and protecting local sea turtles that have a nesting season running from mid-March to mid-June.

Among other delicate efforts, the project has also put into place multiple devices for the monitoring of sea water from which the monitoring data is being sent in real-time to pertinent local government offices.

The attempts have paid off in terms of being well received by local environmental agencies.

"I think this is one of the amazing things happening here. When you see this big company coming from China to help, and to do a good thing... We are really happy to see them [Chinese companies] because they are doing many things to help the country," said Major Ali Saqr Al Suwaidi, president and founder of Emirates Marine Environmental Group.

It's increasingly the case that the Hassyan plant and another major clean-energy cooperation deal in Dubai have turned out to endorse the maturation of Chinese ventures into an environmentally and socially responsible contributor to the local market.

Prior to his State visit, the Chinese president published a signed article in Al Ittihad and The National, two mainstream newspapers in the UAE, noting that China and UAE are deepening cooperation in various sectors, including energy, industry and finance.

"Our new and high technology cooperation is on the rise. The 700-MW Concentrated Solar Power (CSP), a China-UAE joint project, is under construction in Dubai. It will be the world's largest and most advanced solar thermal power plant. The Hassyan Clean Coal Power Plant, the first Middle East project financed by the Silk Road Fund, will be the first clean coal plant in the region," Xi said in the article.

At the Dubai Branch of Shanghai Electric Group Co - the EPC contractor of the solar thermal power plant, Project Manager Zhao Hui told the Global Times that the project, taking up an area of 44 square kilometers - the size of more than 6,000 soccer fields - is expected to be connected to the local grid during the World Expo.

As a high-end market, the Middle East region used to say "no" to Chinese EPCs when it comes to major energy projects, according to Zhao.

Besides, Dubai is prone to seek out high standards and sustainable development, as the city, which is taking the lead in the region's economic development, has systematically utilized a number of first-rate companies and resources, said Zhao.

He believes the solar thermal project, which also focuses on the safeguard of local wildlife and environmental protection, not only will be a significant milestone in the company's breakthrough into the regional market but also is set to bode well for Chinese businesses hoping to gain a foothold in markets along the Belt and Road routes.

In the case of the solar thermal plant, GPS has been used to track more than 200 trees in the project area which are being replanted in neighboring areas.

In addition, special care is being given to the wildlife ecosystem, according to Zhao, with large animals being carefully fed and thousands of smaller ones being relocated to similar environments.

The efforts being made in the Middle East market, which both Duan and Zhao consider to serve as a benchmark of sophisticated businesses, are set to position Chinese companies as genuinely responsible businesses attending to sustainable and inclusive growth.

Some past practices show that Chinese businesses seeking overseas expansion tend to pay insufficient attention to enabling multi-stakeholder growth, especially in environmental terms, thereby weakening their roles as local community builders, said a project professional with a Chinese constructor, requiring anonymity, who has over 10 years of experience in overseas projects.

He told the Global Times, however, that there are growing signs that Chinese constructors have put on the agenda efforts to create jobs in the local markets as well as to establish themselves as competently viable contributors to the local community.

These energy projects in Dubai are but two examples of mindful and professional conduct on the part of Chinese businesses operating abroad, and as industry insiders said, such Chinese ventures will be in high demand as quality growth enablers benefitting all parties - human and non-human - which embody the Chinese economy's shift toward balanced and sustainable growth.