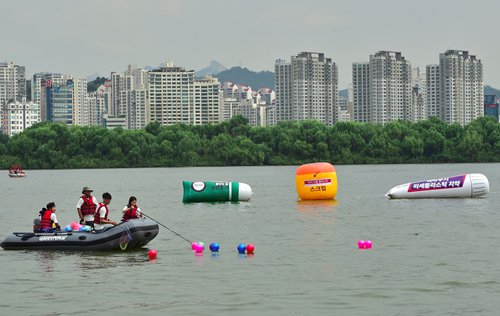 Members of the environmental group Greenpeace collect beach balls symbolizing microplastics from cosmetic products (represented by large balloons) during a campaign on the Han River in Seoul on August 9, 2016. Photo: VCG

It is well known that microplastics are widely present in the world's oceans. Now recent research by Chinese scientists shows the micro-sized materials are also being found in fresh water.
Wang Wenfeng and his team have been investigating microplastic pollution in lakes in Wuhan and the Three Gorges Reservoir area. They have also confirmed the presence of microplastics in fresh water in Dongting, Honghu and Poyang lakes.
Microplastics risk harming the health of humankind as they move up through the food chain. Nonetheless, experts noted the use of plastics in China will continue to rise. A lack of research on coping with microplastic pollution will bring challenges to environmental protection.
Sewage discharge
Microplastics, which come from cosmetics, clothing and other diverse sources, are small plastic particles less than  5 millimeters  in diameter. Microplastics are considered an emerging pollutant and have raised concern across the world.
"The percentage of plastic fiber among all plastic pollution in the fresh water of Honghu Lake and Dongting Lake reaches over 60 percent. Over 70 percent of the microplastics have colors," Economic Information Daily reported, citing Wang.
Microplastics are categorized as primary and secondary.
Primary microplastics are particles sourced from rivers and sewage treatment plants, such as plastic fragments from cosmetics and industrial raw materials. Secondary microplastics are smaller-sized plastic particles that have been broken down by physical or biological methods, including from plastic bags.
Wang said most of the microplastics found in the Yangtze River are secondary. There are about 2,000 pieces of microplastic for every square meter of the surface water of the Yangtze River, 70 percent of which are plastic fiber.
Most microplastic pollutants come from waste water discharged by those living along the banks of the section of the river in Wuhan and the upper reaches of the Yangtze River, according to Wang's research.
Wu Chenxi, a researcher from the Institute of Hydrobiology at the Chinese Academy of Sciences, told the Global Times, "Plastics consumption in China will likely continue to increase, following the pace of the country's economic development."
Every year, about 8 million tons of plastic flow into oceans, as plastic production is estimated to increase by as much as 40 percent in the next 10 years, Xinhua News Agency reported, citing UN data.
A decade ago, China began a war against "white pollution" by banning supermarkets and retailers from offering free plastic bags. Production and use of plastic bags thinner than 0.025 millimeters have also been prohibited.
But the environment now is challenged by the booming fast food and delivery industries. The main method of coping with microplastics is to curb the use of plastics, replacing traditional plastics with biodegradable plastics, Wu said.
Similar to PM2.5
Microplastic pollutants from inland water sources eventually flow into the ocean, Ma Jun, director of the Beijing-based Institute of Public and Environmental Affairs, told the Global Times.
Microplastics, which are invisible to the naked eye are not only in fresh water, but are widely found in sea water and even bottled water, salt and glaciers, experts have found.
Because of its similar size to plankton, aquatic animals often eat it.  If other pollutants are attached to microplastics, such as insecticide, the plastics can harm or even kill species, Ma said. Since people eat fish, microplastics are making their way up the food chain.
"People don't need to panic since no research has found microplastics will bring direct harm to human beings," according to Wu.
Experts contacted by the Global Times said that even though no proof of direct harm from microplastics has yet been found, China needs to conduct microplastic pollution monitoring and impact assessment, before it is too late.