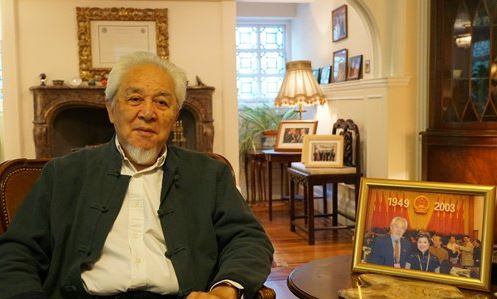 This year marks the 40th anniversary of China's reform and opening-up. Global Times' London correspondent Sun Wei (GT) interviewed Shan Sheng (Shan), President of the UK Chinese Association for the Promotion of National Reunification who has been living overseas for more than 60 years, on Monday.

GT: Can you share your thoughts on witnessing the changes in China during the 40 years of reform and opening-up?Shan: I have stayed in the UK from the beginning of the reform and ­opening-up to the present day, but I have to some extent participated in the whole process. Besides, I have observed the changes of China and overseas Chinese in Europe all the time. The earth-shaking changes over the past few decades have proved China's achievements in the reform and opening-up, far beyond people's imagination. China is rising from a poor country to one that plays a pivotal role in the world, from a past "obedient" country to a new power, from the edge to the center of the world stage. We overseas Chinese are very proud of China's achievements.The success is neither accidental, nor comes about as a result of luck. It is a new world created by Chinese people with hard work. Chinese are very diligent and not afraid of ­hardships. There is a proverb from ancient China that "Nothing is impossible to a willing mind." This is what has enabled China to make achievements and innovations in education, science and technology in the past 40 years.I have had some interactions with the 40 years of reform and opening-up. I went to study in France in 1951, and didn't come back to my homeland until the early days of the reform and opening-up in 1978. In 1972, China and Britain agreed to establish comprehensive diplomatic ties and began to exchange ambassadors. Since then, exchanges and contacts between China and Britain began to slowly warm up. On National Day and other important festivals, the Chinese Embassy would invite representatives of overseas Chinese communities to participate. In 1997, when Hong Kong returned to China, I was invited as one of the 12 representatives of the overseas Chinese communities in the UK, witnessing Hong Kong's return to the motherland. I still remember that day and feel emotional.In 2000, I was elected a member of the 10th Overseas Chinese Political Consultative Conference, and later became the president of the Chinese Association for the Promotion of Chinese Unification. When former Chinese premier Wen Jiabao visited the UK in May 2004 to hold discussions with the local Chinese community, I proposed that China should enact laws to check and curb "Taiwan independence" movement. The Anti-Secession Law was passed by the 3rd Session of the 10th National People's Congress in 2005, and went into effect immediately.

GT: From an overseas perspective, why do you think China's reform and opening-up has been successful?Shan: The most important reason is that the Chinese are hardworking and willing to learn. I have to re-emphasize that "Nothing is impossible to a willing mind." I believe that hard work by the population is the most important factor for China's success.Second, Chinese people are good at math and science, which is also very important. I once learned that one year the highest scores in the Department of Mathematics at Imperial College were earned by Chinese students, which was far beyond my expectation. That explains to some extent why China has made such a progress in science and engineering. Last but not the least, the Chinese have feelings for family and the nation. Overseas Chinese have a very special identity. Western countries emphasize individualism, but China advocates family. This is also the key to the success of many Chinese entrepreneurs. I remember that when the first World Chinese Entrepreneurs Convention was held in Singapore in 1991, Singapore's then prime minister Lee Kuan Yew said that China's business is always family-based. Individuals cannot leave families, and such relations extend to friends and the society. With huge responsibilities, these companies can often achieve great success.

GT: Do you think that the reform and opening-up has made overseas Chinese more confident? What is the change in the status of the overseas Chinese?Shan: In the past, you could tell the overseas Chinese by the bitter look on their face. Now, overseas Chinese people are quite happy. When I went to France to study law in 1951, I didn't even have a passport. China just ended the war at that time and was a very poor and weak country. After I finished my PhD in France, I moved to the UK. The British atmosphere at that time was a bit like what current US President Donald Trump advocates. The colored people had very low status. But decades later, especially after China's reform and opening-up, the British have become more aware of China, and there have been more exchanges between the two countries. Now the attitude of the British has changed a lot. The UK is also very positive about the success of China's reform and opening-up. The "Golden Age" of Sino-British relations is a good proof. Compared with the US, which is now in a trade war with China, the UK has more experience in diplomacy. The US is a bit like a big child. It doesn't know how to behave. It doesn't know how to speak. The words spoken are not weighed. After all, the history of the United States is not long. It takes only one or two setbacks to learn lessons.

GT: What about British attitude toward Chinese?Shan: The British have changed their views on the Chinese people. Now there are Chinese-Briton MPs in the British parliament. There are also local councilors of Chinese origin. The enthusiasm of the Chinese to participate in British politics is growing. This shows that the policy for Chinese participation in politics within the UK has been very open. They know that China is a big country and that friendship with China is beneficial to both sides. The Golden Age of 10 years is a good start.