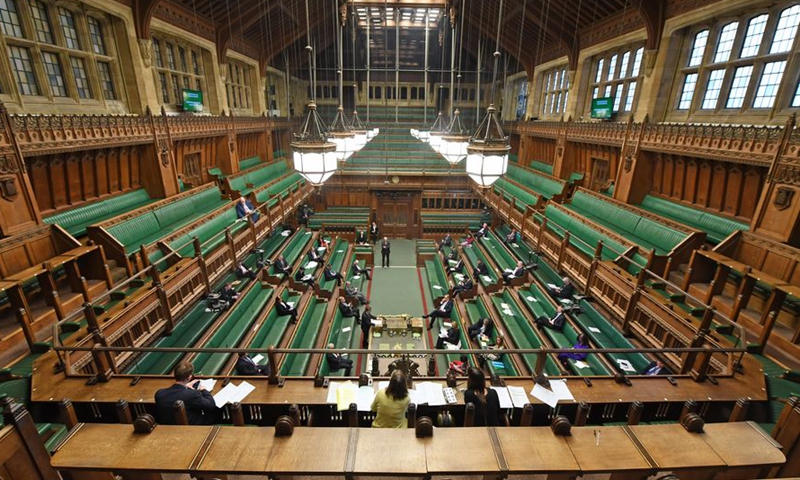 Photo taken on March 23, 2020 shows a general view of the House of Commons in London, Britain. (Photo: Xinhua)

UK Parliament's banning of Chinese ambassador from attending events reflects the narrow and parochial mindset of some individuals in the UK. It is a shortsighted, reckless and cowardly move, and the Chinese embassy strongly condemns it.

In response, spokesperson of the Chinese embassy in the UK said that China's sanctions on a handful of anti-China parliamentarians of the UK, announced in March, were completely justified and reasonable.

It was a necessary response to these people who spread slanderous rumours and disinformation about China's Xinjiang and to the unilateral sanctions on relevant personnel and institutions in China by the UK side on the pretext of Xinjiang-related issues.

On issues that are China's core interests, the Chinese side always responds resolutely and never tolerates wrong moves. Our firm position will never be shaken by such tricks on the part of the UK Parliament, said the spokesperson.

In obstructing the Chinese Ambassador from attending an event in the UK Parliament upon invitation as a retaliation, the UK Parliament is disregarding the fundamental interest of the Chinese and British people and ignoring international protocol. This is totally wrong and doomed to failure. We urge the handful of individuals in the UK Parliament to stop playing political tricks, or they will only make things worse for themselves, according to the spokesperson.