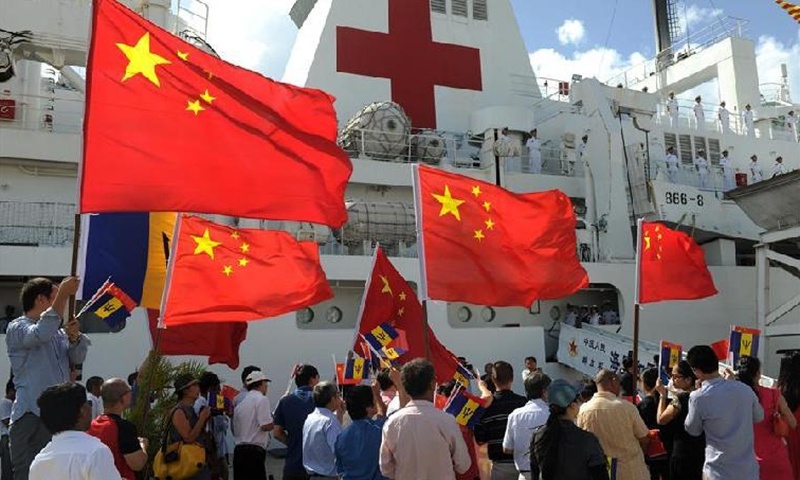 The Chinese Embassy in the UK slammed some UK politicians for trying to upset relations between China and Barbados in the Caribbean, adding that China is committed to developing relations with other countries on the basis of mutual respect and non-interference.

The Times recently reported that Tom Tugendhat, chairman of the UK Foreign Affairs Committee, said that China has been using infrastructure investment and debt as a means to "control" some Caribbean countries, like Barbados, which undermines the UK's status.

We deplore and oppose the comments that distort China-Barbados relations… It is definitely not China's tradition to interfere in others' domestic affairs, nor are we interested or willing to do so, said a spokesperson from the Embassy.

Observers believe that the China-proposed Belt and Road Initiative (BRI) has become a popular global public good and platform for international cooperation, and BRI cooperation is based on the principles of consultation and cooperation for shared benefits.

The spokesperson, whose name was not stated, said that while pursuing cooperation under the BRI, China has always been committed to equality, openness, transparency, market laws and international rules.

"We never impose ourselves on others. Each and every project is the result of equal-footed consultations."

Barbados signed cooperation documents on jointly building the BRI with the Chinese side in 2019.

The Barbados government said in mid-September that the former British colony is seeking to remove the British Queen as its head of state and aims to become a republic by November 2021, the Guardian reported. The Barbados Governor-general Dame Sandra Mason said that it is time to leave the country's colonial past as people want a Barbadian leader after it gained independence in 1966, British media reported.

Seemingly reluctant to face the waning power of the UK, Tugendhat linked Barbados' decolonization to moves with China, observers say.

We hope that relevant media reports on BRI development and the cooperation between China and Barbados will be factual, fair and objective, the Embassy spokesperson said.