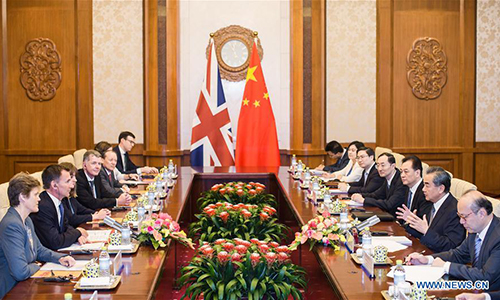 Chinese State Councilor and Foreign Minister Wang Yi met with Hunt at the ninth round of a strategic dialogue between the two countries in Beijing on Monday, according to a release from the Chinese Foreign Ministry (FM).

During the talks, Wang said China-UK ties have been stable in recent years and the two sides should continue to strengthen strategic cooperation, enhance mutual trust and respect each other's core interests and concerns.

As permanent members of the UN Security Council, China and the UK should take the responsibility of protecting multilateralism and safeguarding the global free trade system under the rules of the WTO, and should oppose unilateralism and protectionism, Wang was quoted as saying in the FM release.

Hunt said that the UK also hopes to strengthen dialogue with China, deepen friendship and exchanges in all fields, and continue to promote the "Golden Era" of UK-China relations, according to the FM release.

Hunt said the UK wants to increase communication with China in dealing with all types of challenges, while safeguarding multilateralism and the international order, the FM release noted.

Li Guanjie, an assistant research fellow at the Center for British Studies of Shanghai International Studies University, said China and the UK both support multilateralism.

"China wants the removal of barriers to trade and logistics, while the UK supports a more open investment climate, especially in the financial fields and NGO projects, which means there is greater room for the two sides to cooperate," Li said.

Li told the Global Times on Monday that the British government values the Chinese market and it has actively taken part in the establishment of the Asian Infrastructure Investment Bank and the implementation of the China-proposed Belt and Roadinitiative.

Li also noted the British government's plan to boost the economy of its northern regions, saying that if this were to involve a high-speed railway project, Chinese companies have technological and pricing advantages.

Zhao told the Global Times on Monday that the May government wants to maintain stable trade with China in an effort to drive its domestic economy and better deal with the difficult Brexit negotiations.

"Active diplomatic policies could also help the May government gain bargaining chips with the EU. The UK is also making preparations for future cooperation on trade and other fields after Brexit," Zhao said.

Hunt said on Monday that "we discussed the offer made by Foreign Minister Wang to open discussions about a possible free-trade deal done between Britain and China, post-Brexit," AFP reported.

Aside from trade exchanges, the UK may seek to cooperate with China on some major international issues in an effort to main its international influence after Brexit, experts said.

A release the British Embassy to China sent to the Global Times on Monday said that Hunt's meeting with Chinese officials were expected to include discussions on how the UK and China can work together on global challenges, such as climate change, development, security and enforcing UN sanctions on North Korea.

"Despite the closer trade exchanges, the UK has also acted like other Western countries - it may have disputes with China on some issues, including international security and international politics. For example, the UK may sometimes stand with the US on dealing with South China Sea issues," said Zhao.

After his one-day visit to Beijing, Hunt next travel to Paris and Vienna for talks with his counterparts on the UK's exit and international security issues such as the war in Syria, and the Iran nuclear deal, according to the British Embassy.