A UN official has applauded China's contribution to African countries in improving their public health, saying that China has provided "a wealth of urgently needed support" ranging from infrastructure construction, technology, financial assistance, and personnel training. 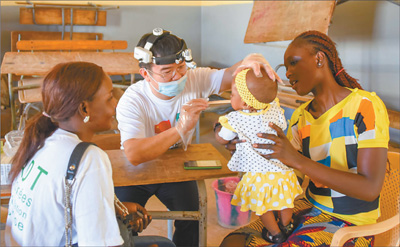 UNAIDS Country Director Amakobe Sande said that China was the biggest contributor working to fight against the Ebola epidemic in West Africa.

"Chinese expertise and experiences are very hugely valued," she said, adding that the Ebola epidemic was well controlled “because of Chinese technical and financial resources.”

She made the remarks in an exclusive interview with China.org.cn on Thursday, ahead of the High-Level Meeting on China-Africa Health Cooperation which began on August 17 in Beijing.

China and Africa have experienced a long history of cooperation in the public health sector, starting in 1963 when China sent its first medical team to Africa. Over the past five decades, this cooperation has upgraded and deepened thanks to the unremitting efforts of China and African countries.

"UNAIDS is excited that President Xi’s 10-point planning includes a priority area on public health," Sande said, adding that the proposal has made China-Africa health cooperation "more meaningful and sustainable."

To further implement the outcomes of the FOCAC summit in Johannesburg, in 2016, China signed an agreement with the African Union (AU) for the cooperation on Africa Centers for Disease Control and Prevention (Africa CDC) in a bid to assist Africa in improving its public health.

Sande pointed out that China's support to the Africa CDC will strengthen Africa's disease surveillance and reporting system.

"China has expertise [on disease surveillance and reporting] which can be passed on to its African brothers and sisters," she said.

In June, 2016, Chinese President Xi Jinping proposed to build a "healthy" Silk Road during a speech in Tashkent, Uzbekistan. With the goal of improving the public health in countries along the Belt and Road, last month UNAIDS brought representatives from Kenya, Tanzania and Uganda, three eastern African countries where HIV is an emerging problem, to China to learn its experiences in the fight against HIV.

Sande hopes that the visit could be "a bridge of friendship and cooperation" between China and East Africa so as to facilitate experience exchanges and public health collaboration.

She also expressed her expectations for the upcoming FOCAC 2018 Summit which will be held in Beijing next month.

She called on China and African countries to step up efforts to strengthen the manufacturing capability for medicines and health products in Africa in a bid to improve the accessibility and affordability of medicines.

"We will not achieve universal health coverage in Africa if 97 percent of the medicine used by African countries is imported," she said.

UNAIDS is leading the global effort to end the AIDS epidemic as a public health threat by 2030 as part of UN's Sustainable Development Goals. Since it began operation in 1996, UNAIDS has led and inspired global, regional, national, and local leadership, innovation, and partnership to ultimately consign HIV to history.