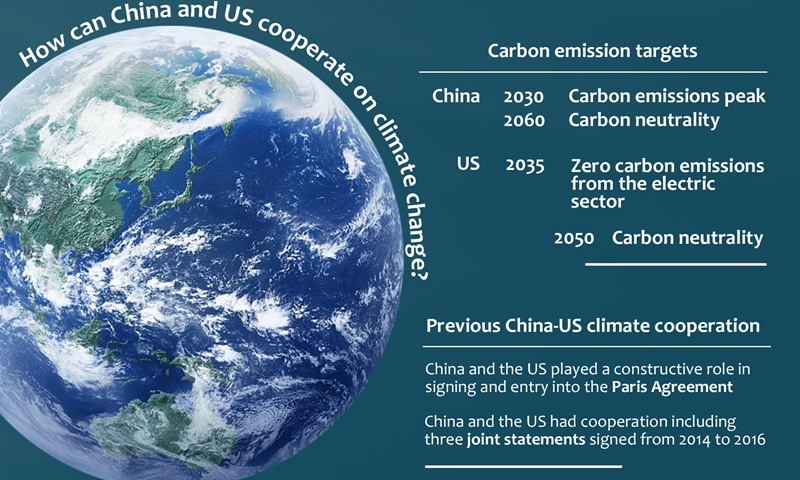 How can China and US cooperate on climate change? (Graphic: GT)

The United Nations (UN) issued on Monday a landmark report that warned against human-induced "irreversible" climate change and called for rapid actions in global cooperation. Experts said China and the US should join hands in limiting global warming and tackling the common-mission challenge despite political frictions.

The report, issued by the Intergovernmental Panel on Climate Change (IPCC), a UN body for assessing the science related to climate change, was described as a "code red for humanity" by UN Secretary-General António Guterres.

The IPCC report, approved by 195 member states, noted that limiting warming to close to 1.5 C or even 2 C will be beyond reach, and it will further intensify climate extremes, such as heat waves, heavy precipitation and associated flooding, which happened increasingly frequently and intensely in recent years around the world.

"It is indisputable that human activities are causing climate change," and make extreme climate events more "frequent and severe," said the report, urging immediate, rapid and large-scale reductions in greenhouse gas emissions. It is also believed to provide global leaders a "gold standard summation of modern climate science" ahead of the 26th UN Climate Change Conference of the Parties to be held in November, said CNBC.

Collaboration in tackling climate change has been a hot topic for China and the US, the world's two largest carbon dioxide emitters. Chinese Foreign Ministry spokesperson Zhao Lijian said on July 21 that the two countries share the common mission of combating climate change and should set an example in the international arena. US Deputy Secretary of State Wendy Sherman also pointed out the China-US collaboration on the issue during her meeting with Chinese State Councilor and Foreign Minister Wang Yi on July 26.

China-US cooperation in the area of climate change will help restore the balance of collaboration between China, the US and the EU on the issue, and form a united and cooperative system to jointly tackle such a global challenge, Wang Yiwei, director of the institute of international affairs at the Renmin University of China in Beijing, told the Global Times on Monday.

He said it will facilitate negotiations between the two countries to ease the current impasse in bilateral relations, and is conducive to a complementary technology innovation and application.

The IPCC report sounded a "death knell for coal and fossil fuels" before they "destroy" the planet, said Guterres. "The scale of recent changes across the climate system as a whole and the present state of many aspects of the climate system are unprecedented over many centuries to many thousands of years," said the report.

Recent months have seen massive wildfires in western US, prolonged extreme heat across many parts of the Northern Hemisphere, and flooding caused by extreme rainfalls in Europe and China, including the flood disaster in Central China's Henan Province that killed 302 and caused massive losses.

Research conducted by an international team of scientists from China, the US, Germany and Finland indicated that the extreme cold events that China and the US experienced in 2020-21 winter may share similar underlying mechanisms with extreme heat, which is also related to the global warming.

After having examined three record-breaking cold air outbreaks in Beijing and Tianjin with a temperature of -19.7C (-3.46 F) and -19.9 C (-3.82 F), respectively, and the historic cold that struck North America's Midwest and Deep South, they found that the integrated effects of Arctic amplification, anomalous ocean thermal anomalies, and interactions with the atmospheric circulation cause extreme cold events.

Han Zhe, a co-author of the research report and a scientist at the Institute of Atmospheric Physics of the Chinese Academy of Sciences, said the frequency of extreme cold events will increase further and can occur anywhere as global warming continues.

He noted that humans need to accelerate and enhance the resilience of integrated systems of human-ecological-environmental health to extreme weather events and improve the forecast skill in predicting such events, and establish a rapid emergency response to reduce the extreme weather-related risks.

Han said a synergistic effect of global atmospheric circulation anomalies is essential in causing the occurrence of extreme heavy precipitation.

China has seen rising extreme heavy precipitation between 1961 and 2020 and significantly increasing extreme heat events since the mid-1990s, according to a bluebook on climate change the China Meteorological Administration rolled out at a press conference on Wednesday.

Jia Xiaolong, deputy director of the National Climate Center, said at the press conference that extreme weather events globally this summer, including severe rainfall in Henan, are manifestations of the abnormal global atmospheric circulation. 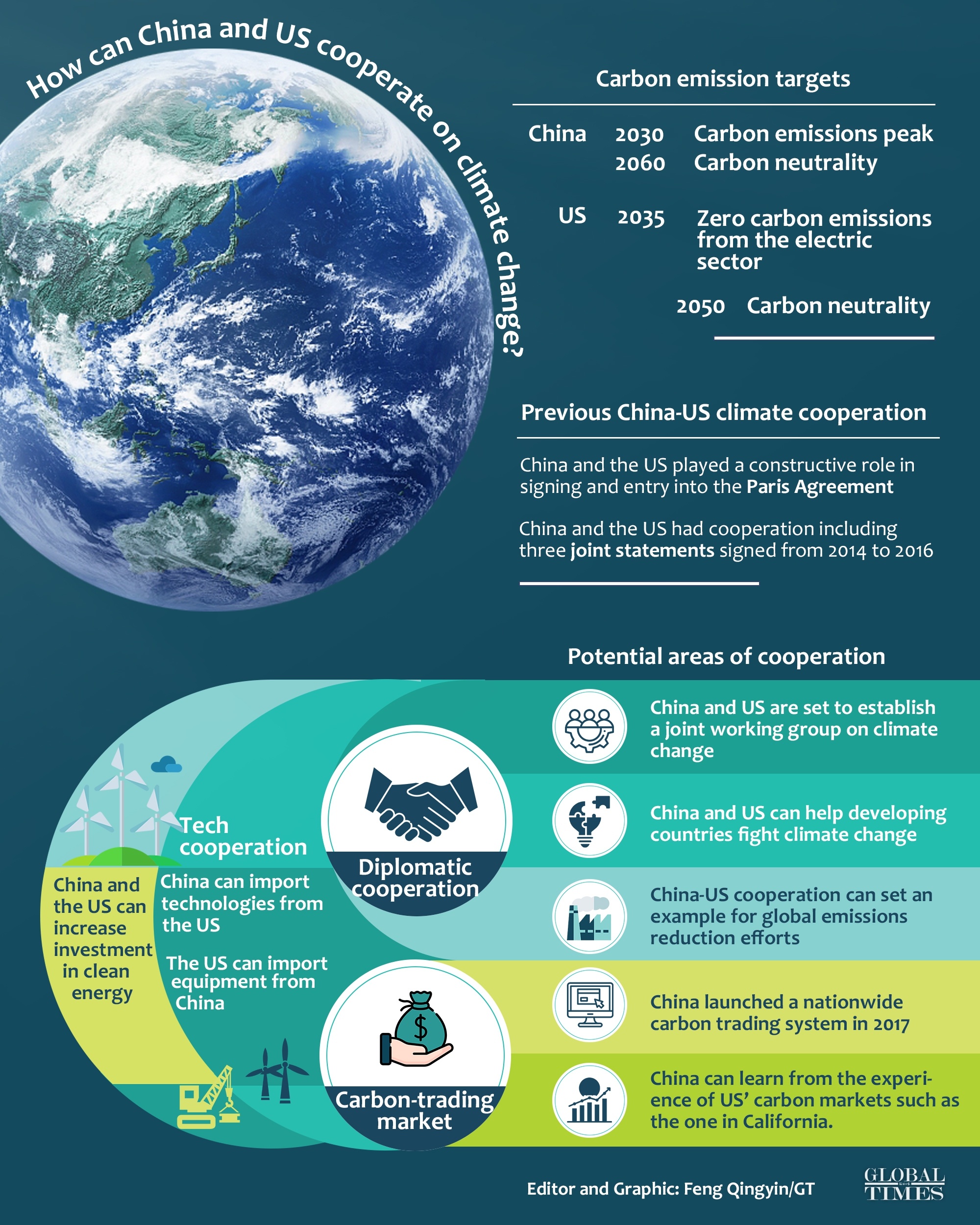 How can China and US cooperate on climate change? (Graphic: GT)