UNITED NATIONS, Feb. 6 (Xinhua) -- Beijinger Harwey Li and his family visited the United Nations Headquarters in New York on the first day of the Chinese Spring Festival, acquainting themselves with details of the world body, and China's contribution to it. 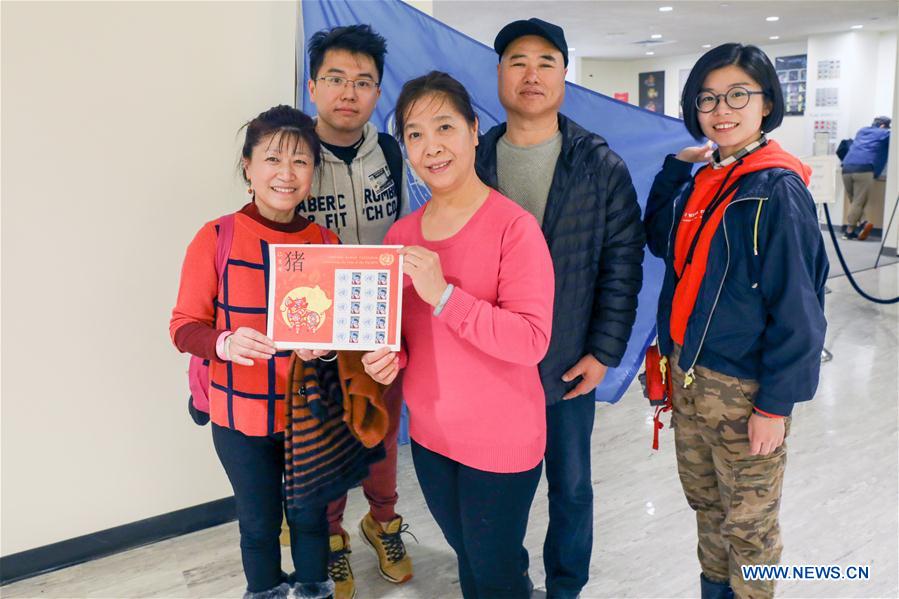 "What a surprise for the Year of the Pig!" said Li in the company of his wife, parents and mother-in-law. A staff member of China Mobile's Hong Kong branch, Li included the tour to UN Headquarters in the itinerary of his family trip to the United States to celebrate the Chinese Lunar New Year, which began on Feb. 5 this year.

"The UN is a household name to all of us and China is a permanent member of the Security Council. However, it is only after the hour-long trip that we learned China has now grown to be the largest contributor of troops among the five Security Council permanent members and the second largest contributor of budget money among all the contributing member countries in regard of its peacekeeping efforts," Li told Xinhua.

The family was also informed that China's ongoing poverty-relief drive is in line with the UN sustainable development goals and that "China is believed to be the biggest contributor in poverty reduction around the world."

Li and his family have gone on several overseas trips during Spring Festivals, having visited Japan and some Southeast Asian countries. This year, they took back home a stamp of memorabilia printed to feature their heads in juxtaposition with the UN logo.

"Li and his wife are very considerate. They made all the plans, reserved the hotel online and even bought frozen dumplings from a Chinese store so that we could well live the Chinese tradition of having Jiaozi (dumplings) on the first day of the Spring Festival," his mother-in-law told Xinhua, adding that the travel came into being through "crowd funding" within the family.

A group of Chinese tourists pose for a photo in the General Assembly hall at the United Nations headquarters, in New York, Feb. 5, 2019.

Ms. Wang from China's southwestern city of Chongqing brought her daughter to New York this Spring Festival and the UN trip was the highlight on their agenda.

"On one hand, children can broaden their horizon through the trip; on the other hand, they can learn a lot more about international politics, which is helpful to their study," said Wang.

Tang Lifang, who is currently studying in the United States, invited her large family to visit New York during this holiday. Although she has visited the UN in the summer of 2015, she was still impressed this time.

"Even if there was no guide and I could only look through the glass at the Security Council chamber, I could feel the solemn atmosphere. My family and I also learned much background knowledge, such as the UN General Assembly's 'one country, one vote rule,'" Tang told Xinhua.

"The UN is an open and friendly place where visitors are allowed to enter the meeting room even as delegates are discussing major issues or the meeting is under way," she added.

It was estimated that around one-third of the visitors were Chinese. During China's public holidays, Chinese visitors would usually double or even triple, Jiang added.

Due to the surge, Marsh Oliver, a young American who is an English-language tour guide, was temporarily shifted to Chinese-language duty this Spring Festival. With one-year working experience in China's northwestern city of Xi'an, he looked warm and sincere while receiving his Chinese guests who regularly called him a "star guide."

"Xin Nian Hao (Happy New Year)!" he recited the greeting phrase in Chinese, which he frequently used these days. And, "Kung Hei Fat Choy (Wish you fortune and luck)!" was the opening remark that he adopted when meeting each group of tourists from China, said Oliver.