CHINA Unashamed of adopting double standards on violent protests in US

Unashamed of adopting double standards on violent protests in US 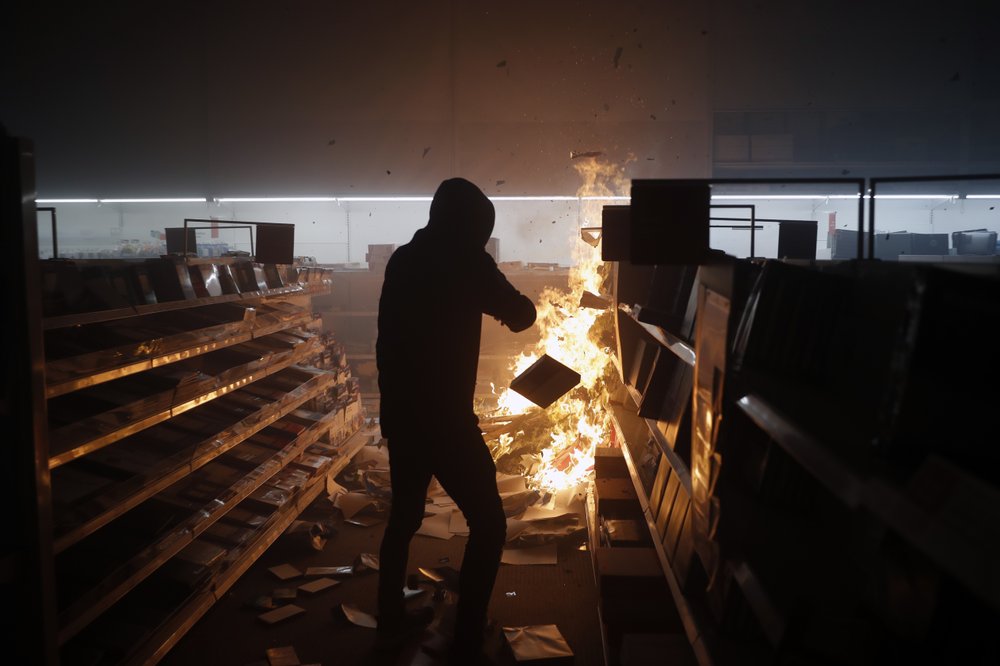 People loot then burn an Office Depot on May 29, 2020, in Minneapolis. Protests continued following the death of George Floyd, who died after being restrained by Minneapolis police officers on Memorial Day. (Photo: AP Photo)

"I'm from Hong Kong and protesters here have some of the smartest tactics when dealing with our own police brutality. Here is an example of how they put out tear gas. I'll share more if y'all need."

This is a tweet posted by a user named kylie⁷ on May 29 on the ongoing protests across the US caused by the death of George Floyd. The tweet contains a video featuring how Hong Kong rioters extinguish tear gas with an unknown liquid.

It appears that with the US politicians encouraging protests in Hong Kong and other parts of the world, including Nancy Pelosi, who called the riots in Hong Kong last year "a beautiful sight," the chickens have come home to roost in the US, observers said.

kylie⁷ and many other similar Twitter accounts seemingly from Hong Kong have seen an extremely high volume of interaction on the platform. Suspicions that Hong Kong mobs are sharing their "experience" with US rioters are obviously not groundless.

The post had been forwarded nearly 60,000 times and liked by about 120,000 Twitter users as of press time. In the post's comment section, kylie⁷ shared details of the equipment that Hong Kong protesters wore in the summer of 2019, such as yellow helmets, goggles, and black face towels, with detailed written instructions for each piece of equipment.

On another tweet, Kylie? said, "Hong Kong protesters are committed to 'being water' - fluid and shape-shifting, disbanding as quickly as they regroup, always maintaining an element of surprise over their heavier, less mobile opponents."

The "experience" shared by kylie⁷ covers all details of street protesting - in addition to how they move during protests, the post also covers details such as identifying policemen, and warns protesters to turn off face or thumb recognition functions on their phones.

"If you get arrested they could unlock ur phone by just putting it in front of ur face or use ur thumb to unlock it and see what's inside ur phone to find proof to charge you," kylie⁷ said.

Kylie? also warned the protesters about undercover cops, saying they "usually have equipment such as earphones/earbuds as they would need to receive orders from their commander."

In addition to Kylie?, other active Twitter users from Hong Kong are out there sharing their protest "experience."

The Twitter account @hwaslintroller, who claims to be a user from Hong Kong, elaborated on tips, such as how to escape from police and offered advice on what to do after being arrested. Another Twitter user @bauhiniablack explained how to set up Hong Kong-style barricades with detailed instructions and diagrams.

On the LIHKG forum website, which is used by large numbers of Hong Kong rioters, the sharing of "experience" with US protesters has been noticed by members themselves, with some calling it "transporting revolution," and some posting news links that said the "governor of Minnesota suspected the involvement of foreign forces in the chaos".

In a report by the Daily Mail on May 30, Minnesota Governor Tim Walz suggested that foreign and extremist influences may be fueling the chaos. But this group of people from Hong Kong are obviously still reveling in their "valor" and "destructive power" and are thrilled to share their experiences online, seemingly willing to "take responsibility" for the biggest turmoil caused by the persistent problem of racial conflict over the last half century.

But as former Hong Kong chief executive Leung Chun-ying said, the chaos in the US further proves that "black hands" are behind the riots in Hong Kong.

On his Facebook posts on May 31, Leung said, "You can see from the US violence over the past few days that thugs and protesters have no helmets, no masks, no radio communications equipment, no octopus cards, no Molotov cocktails, no cash collection, no large amounts of amateur 'journalists', no umbrellas, no medical teams, no 612 funds. If you used to believe there are no black hands behind it, or no financial supporters, do you still believe it today?"

Some people on the LIHKG forum warned others not to get involved if they are not familiar with local politics in the US, while some suggested using words such as "independent investigation," "punish" and "all lives matter" as it "would make people link the scenario with Hong Kong, which also saw police brutality."

On the anti-China forum, some netizens are anxious to whitewash the chaos in the US, believing that "the US government and people's attitude toward the violence in the US is about 'system reform, social progress, and addressing issues', while in Hong Kong, the government took the attitude of "escaping, discrediting and maintaining the status quo."

However, the Hong Kong rioters immediately fell silent after US President Donald Trump said he's ready to deploy military troops to crush the protests in Minneapolis.

"We have our military ready, willing and able, if they ever want to call our military. We can have troops on the ground very quickly," Trump told reporters.