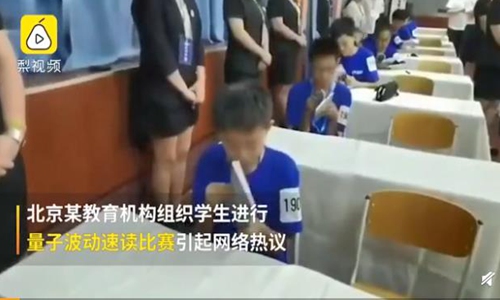 Five quantum speed reading training centers were ordered to close and make improvements as they were operating without a business license and proper authorization, according to the Ministry of Education (MOE) on Thursday.

So-called quantum speed reading supposedly helps young students read 100,000 words between one and five minutes by flipping through the pages of a book, the speed reading centers advertised.

According to the advertisements, quantum speed reading works by tapping into a person's higher sense perception (HSP), which helps the brain visualize dynamic images.

A video depicting students competing in a speed reading contest in Beijing went viral on social media last October. Netizens immediately questioned the legitimacy of the center and challenged the reading method.

"The false products or claims about quantum have become so popular in the market, which shows that the public still knows very little about quantum science," Pan Jianwei, a scientist who is better known as the "Father of Quantum" in China, said during a speech on Sunday.

The quantum wave reading method was invented by a so-called Japanese expert who claimed that by flipping through a book in an unknown language it could stimulate the brain and translate the material into a reader's native language.