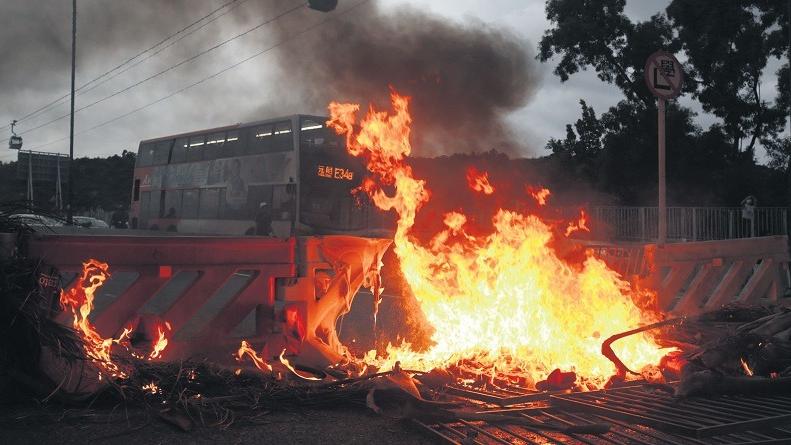 Radical protesters turned Hong Kong into a battleground over the weekend as they launched some of the most ferocious attacks on the city’s police, residents and public facilities, and severely disrupted flights at the airport in their attempt to force the SAR government to bow to their demands.

In a statement on Sunday night, the Hong Kong Special Administrative Region government severely condemned the “barbaric” and illegal acts of the protesters. It said their conduct had harmed the safety of other people and seriously disrupted the city’s daily operations. Some mobsters also burned a national flag at Tung Chung town, which challenged the nation’s authority and “one country, two systems”, the statement said.

The government vowed that the police will take resolute enforcement action against all unlawful and violent acts to protect the safety and rights of members of the public.

Saturday’s violence spilled over onto Sunday as hundreds of rioters marched towards Chek Lap Kok International Airport on Lantau Island, lit fires on barricaded roads leading to the airport and destroyed facilities at MTR stations, forcing hundreds of air commuters to be stranded on blocked roads.

Train services to the airport had to be suspended, and roads in the vicinity were choked as the mobsters escalated their campaign against the nowstalled extradition law, now in its 13th consecutive month.

Travelers were stuck for hours on blocked roads leading to the airport, having to alight from cars and coaches and walk towards the airport departure hall.

It was the second time in two weeks that protesters had severely disrupted flights in and out of the airport, forcing officials to shut down operations and cancel thousands of flights.

The rioters had defied an interim injunction granted by the SAR’s High Court on Aug 23 banning protesters from obstructing airport operations. The court order provides for any person who fails to comply to be held in contempt of court and liable for imprisonment or a fine.

At Tung Chung town near the airport, the protesters wrecked facilities, including ticket vending machines, smashed windows and scrawled offensive graffiti at the MTR station.

The Tung Chung station was forced to close. The Tung Chung Line, which links the MTR rail line with Central on Hong Kong Island - the city’s prime business center - and the main residential area on Lantau, also serves the highspeed rail station in West Kowloon and Hong Kong Disneyland. It had to halt services, causing serious disruption to commuters in the area.

Saturday saw a chaotic night of running battles between police and masked rioters. A total of 63 people were arrested at the two of Kowloon’s busiest MTR stations - Prince Edward and Mong Kok - after protesters vandalized the stations and assaulted passengers, according to the police. Both stations remained closed by late Sunday evening.

Police also seized gasoline bombs, laser pointers, catapults and steel balls. In one case, a 13yearold was found in possession of two gasoline bombs and a lighter.

The arrests at Prince Edward Station were made after the police received reports of fierce clashes between two groups of passengers, Tsui said.

Another 11 protesters were arrested in Causeway Bay and Sai Wan on Hong Kong Island on suspicion of possessing offensive weapons.

During the fierce clashes on Saturday, the police used water cannons and tear gas on rioters who had hurled petrol bombs and bricks at them.

Chief Secretary for Administration Matthew Cheung Kin-chung reiterated on Sunday that Hong Kong’s top priority now is to put an end to the violence and restore peace.

Writing in his official blog, he denounced the protesters’ extremely violent acts on Saturday, and urged all members of the community to firmly reject such illegal behavior.

The government fully supports the police in strictly enforcing the law and bringing the criminals to justice, Cheung vowed.

These offenses have gravely undermined the law and disrupted public order in reckless disregard for public safety, he said.

The government is in the process of setting up a platform for dialogue with the public to resolve the deadlock and put the city back on track, Cheung wrote. He called on all sectors of society to work together with the government to address society’s deeprooted issues.

Former chief executive of Hong Kong Leung Chunying said it’s about time that all forces and resources have to be deployed to quell the violence that has swept Hong Kong for nearly three months.

Leung, who’s now vicechairman of the National Committee of the Chinese People’s Political Consultative Conference, said the escalating turmoil has shown that the true intention of the radicals is to create a “regime change”.

The protesters, he said, have resorted to violence to try to overthrow the SAR government, turning the “highdegree of autonomy”, under which Hong Kong is governed, into “total autonomy”, and making the city a “puppet” against the central government.

In addition to its police force, the SAR government has access to political, administrative, financial and legal means capable of handling the current situation, some of which have not been used so far, he said.

Hong Kong lawmakers also slammed the rioters’ “insane acts”. Some 39 legislators from the proestablishment camp signed a crossparty joint statement demanding united action by the community to protect the city from chaos by taking a firm stand against violence.