CHINA Under the shadow of 'Taiwan independence', cross-Straits exchanges give Taiwan business people sense of belonging

Under the shadow of 'Taiwan independence', cross-Straits exchanges give Taiwan business people sense of belonging 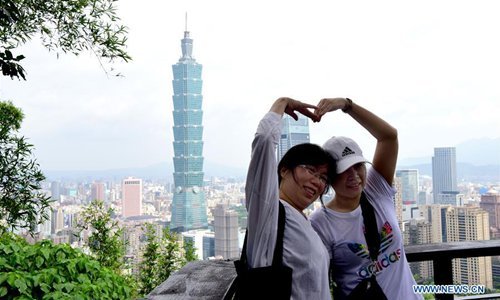 Even as Taiwan authorities desperately try to obstruct normal cross-Straits communication and exchanges, begging favor from the US, businesspeople from the island of Taiwan more than ever feel the necessity to strengthen cooperation with the mainland despite facing pressure from local authorities.

In the face of obstacles including political censorship and attacks by some unscrupulous media, many Taiwan businesspeople reached by the Global Times said they firmly believe that exchanges between the mainland and the island of Taiwan can never be cut off by prejudiced political forces.

"Although there are unprecedented difficulties and pressure, there are still many people who continue to run along the road of peaceful exchanges and speak in the voice of the majority of Taiwan compatriots in pursuit of peace," Huang Ching-hsien, president of Chinese New Era Exchange Association told the Global Times.

Compared to the passive Taiwan authorities which disregards people's interests, the Chinese mainland has contributed most of the positive energy to improved cross-Straits relations, analysts said. More and more Taiwan businesspeople told the Global Times that they have not just gained economic benefits, but also a deepened recognition of their Chinese national identity.

"I used to plan to work for 30 years in the mainland then go back to Taiwan, but now instead, I want to bring my parents from Taiwan island to mainland for retirement," Hsu Iuan-shuen, general secretary of western region Youth Committee of the Association of Taiwan Investment Enterprises on the Mainland told the Global Times.

Hsu first came to the Chinese mainland in 2002. Holding the stereotype that "the mainland was very backward," he tried to leave on the pretext of returning to Taiwan to get some daily necessities. His friend told him "even in Chengdu, an inland city in the west of China, you can buy anything and opportunities exist everywhere." This pursued Hsu to stay and start his own career.

Hsu has witnessed the reciprocity between Chinese mainland and the island of Taiwan. "The business environment in Taiwan is getting worse and worse, and more and more young people in Taiwan are eager to work in the Chinese mainland. There has even been a 'go-west trend.'"

Hsu noted that many Taiwan people, influenced by the rumors about the Chinese mainland, are unable to move forward.

"In fact, as long as Taiwan young people have ideals and the fighting spirit, they will surely get a good harvest in the mainland. The Chinese mainland government has provided comprehensive and detailed preferential policies for Taiwan businesspeople. In addition, there are more and more entrepreneurship platforms promoting cross-Straits integrated development." Hsu said.

The Chinese mainland government has rolled out a series of policy packages to give equal treatment to businesses and individuals from the island of Taiwan. In May, the government announced 11 new measures to help Taiwan enterprises speed up the resumption of work to tide over difficulties presented by the coronavirus pandemic, according to the Xinhua News Agency.

As the chief operating officer of Deyang Cross-Strait Youth Pioneering Work Tribe (DCYPT), Hsu regards his mission as describing the Chinese mainland in terms that young Taiwan residents can understand.

In recent years, DCYPT has visited many universities in the Taiwan island, offering entrepreneurship lectures to introduce the Chinese mainland and explain the favorable policies towards Taiwan businesspeople, helping Taiwan youth dispel misunderstandings and doubts.

In every summer vacation, college students from Taiwan come to Deyang in West

"Many of them did not want to leave, because they have not only gained knowledge, but friendship as well. Every day in Deyang, they were treated by mainland colleagues during meal time. The canteen was always very lively," Hsu said.

Hsu is also planning to give back to his new hometown, by not only helping Deyang build roads in the countryside, but also launching a cultural program to help residents sell sweet potatoes to revitalize the rural economy.

In the spring of this year, when the epidemic prevention materials in the Chinese mainland were in short supply, Lai helped the government buy masks, protective clothes, and goggles from abroad. He was nominated for the local "May 4th Youth" honorary title.

Five years ago, Lai chose to get involved in the seafood trade in Fujian Province.

During the National Day holidays, Lai went to see the movie "My People, My Homeland."

"I cried throughout the movie. I was astonished and moved by how the great changes that have taken place in the countryside of my country. I also admire Chinese mainland residents who have such a real sense of happiness," Lai said.

Although Lai's career is just getting started, he is proud to have the opportunity to serve his compatriots and gain acceptance in the Chinese mainland.

In sharp contrast to the warm and inclusive environment in the Chinese mainland, many Taiwan people find themselves in an awkward predicament in Taiwan.

Many DDP-backed media and think tanks have tagged Taiwan people who are committed to promoting cross-Straits communication as Beijing's "collaborator."

Lai noted after Tsai Ing-wen pushed the passing of the so called "Anti-infiltration Act," many Taiwan people worked in the mainland were subject to political censorship when they returned to Taiwan.

Lai said he would like to be a coordinator of cross-strait exchanges, because despite how much separatists may try, the tendency towards reunification with the motherland is inevitable.

"People on both sides of Taiwan Strait are all yellow skin, black hair. We learn the same language, and the traditional patterns of Fujian New Year pictures also exist in Taiwan island. We can't deny the fact that we are family. But I can't understand why the DPP is fawning over the US, where racial discrimination is so serious, but are indifferent to its compatriots across the Strait." Lai sighed.

Taiwan people have accumulated a lot of discontent and been brainwashed by prejudice, the light of hope has gone from their eyes, said Dong Wen-jun, a teacher who once taught at Taiwan's Chengchi University.

"When I settled in Xi'an, when listening to the children loudly singing the national anthem in the primary school in front of my house every Monday, I felt the place where I live is vibrant," Dong told the Global Times.

Dong and her husband Chen Yi-xun, set up a youth hotel in Xi'an, which is the starting point of the Silk Road and a city with a profound history of the Chinese nation.

Chen noted that the Taiwan residents who want to visit the mainland the most are retired people, who come twice a year on average.

However, some young people misunderstand the mainland as they never set foot there and all their impressions of the mainland come from their education and some biased media.

"Now the DPP is more afraid that Taiwan people know how advanced the Chinese mainland is, so they bombarded them with fake news, which makes cross-Straits communications even more important," Chen said. "If there are Taiwan guests in our hotel, we must tell them about the local conditions and customs, as well as the achievements made by the Chinese mainland."

Huang stressed that further communication and deeper understanding is the antidote to estrangement.

"Extensive and in-depth interaction platforms such as exchange forums and cultural experience activities help Taiwan people build a sense of inclusive understanding and emotional belonging, which will naturally strengthen their shared cultural and national identity," Huang told the Global Times.