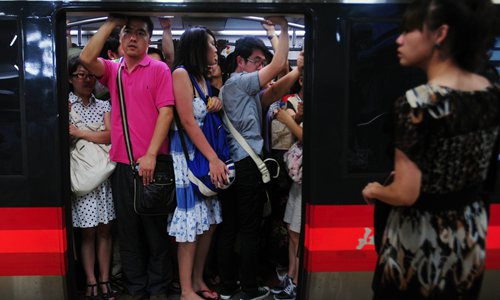 Women and men squeeze into a crowded subway in Beijing. (Photo: VCG)

Every morning, millions of Beijingers line up and wait for trains in large congested subway stations. Young and old, women and men have got used to commuting in this hectic cosmopolitan city.

Liu Yu arrives in one of the busiest subway stations in eastern Beijing at 7 o'clock one morning, like he does every work day. Thirtyish in a dark grey running shirt with a pair of black sneakers, he walks around the station, staring at male passengers.

Liu's T-shirt is drenched in sweat in the 37 C Beijing summer. A middle-aged man with a briefcase catches his eye. The man is at the end of a queue at first, but later changes to another line, his eyes erratic. He stands behind a lady in a short skirt, very close to her.

Liu signals with his eyes to several men nearby. They gather round the man, turning on their mobile phone cameras to film his every act and every move secretly. A contemptuous smile appears on Liu's face.

Liu and his partners are undercover police officers and members of the Sihui Subway Station "hunting perverts team."

They look for sexual offenders mainly in the stations at Communication University of China and Guomao, where many young students and white collar workers get on the trains every day. This Global Times reporter recently followed the officers working undercover to catch sexual offenders in nine subway stations on the Batong Line, which moves 2.1 million passengers in and out of the heart of the city each day.

This summer, the Beijing Sihui Subway police station has caught 47 people and detained 35 for sexual offenses on the subway, according to the deputy police inspector of the station, Wang Yongchao. "The purpose of the 'hunting perverts' action is to fight, frighten and educate a group of people, and at the same time, teach passengers how to take precautions, so that they can stop unlawful infringement in time," he said.

Passengers line up for a subway on the Batong Line in Beijing on July 31. Photo: Zhang Dan/GT

As a nearly full train came to the platform, the suspect suddenly pushed the hip of the lady in front of him, pretending he was striving to get on the train. At the same time, Liu and another two undercover police officers squeezed into the train and stood by him, watching his hands closely and starting to film his every movement.

The man stood close to the lady and touched her thigh on purpose. In the air mixed of sweat and perfume, even though the woman became aware of the sexual harassment she was suffering, she could not move away in the overcrowded coach and did not cry out.

The sexual offender got off the train at the Sihui stop and started looking for the next victim. This time, he targeted a woman in a short skirt and quickly followed behind her.

In order to avoid alerting the suspect, Liu decided to split the team: two undercover police officers followed the offender while Liu and another colleague gathered verbal evidence from the woman who has just been harassed, hoping she could identify the harasser.

Liu showed his badge and asked, "Did you feel anyone groping you just now?"

The woman shook her head and did not give any feedback, then soon walked away. Because of the silence of the woman, police officers could only let the harasser go and did not stop him.

Sweat poured down Liu and his colleagues' faces when they got back to the police office. They were disappointed as if they had lost a soccer game, but this was not the first time that female passengers were reluctant to identify their harasser.

Liu told the Global Times that both identification from the victim and video evidence are indispensable. Even better is testimony from another witness. "If the victim does not identify the harasser, it's impossible to file the case," he said. Silence from the victims is the biggest difficulty for the team to carry out their work.

Jane (pseudonym) was a victim of sexual harassment on the subway in Shanghai this July. "When I was preparing to get off the train, I thought someone was groping my bum, but I wasn't sure. Maybe it's just too many people," Jane said, recalling what happened to her on the way to meet her friend.

However, after about one minute, she could still feel someone groping her. She turned around, saw a fortyish man in white Polo shirt, and quickly rushed out of the train when the door opened.

"If I encounter such a circumstance again, I would stop the harasser at once!" Jane was worried that the harasser would be gone by the time the police arrived, so did not bother calling.

Liu said that some women feel ashamed to report sexual harassment and are worried about the risk of retaliation, hence, they choose to ignore the incident and refuse to help police.

Beijing-based lawyer, Lü Xiaoquan, who safeguards women's legal interests at the Qianqian Law Firm, said the worst attitude toward sexual harassment is tolerance, because it will further encourage a harasser's behavior.

According to Article 44 of the Law of the People's Republic of China on Penalties for Administration of Public Security, a person who molests another or intentionally exposes his or her body in public place, if the circumstance is abominable, shall be detained for not less than five days but no more than 10 days.

Because the amount of sexual assault cases rises dramatically every summer, the Public Transport Sector at the Beijing Municipal Public Security Bureau launched the "hunting perverts" initiative in June 2017. By the end of this July, over 20 teams arrested more than 160 sexual offenders on the subway in the city.

Sometimes when undercover police officers arrest suspects, passengers in the subway car highly praise and applaud these heroes. A volunteer who assists with directing passenger flow in the Sihui subway station told the Global Times the undercover police officers work very hard for two to three hours at the busiest time on the line every morning. "We can help them identify sexual offenders and remember what clothes they wear. When the police come to work, we will give them a signal with our eyes," she said.

Police inspector Wang summarized several features of harassers: they choose crowded doors, especially locations behind beautiful women; or they cross from one platform to another and gaze at women's private parts.

Police officers said they cannot categorize suspects as they have arrested people who are elites in the financial sector, graduates from top universities and officials in high positions. The most serious case was a harasser who exposed his genitals in the subway and rubbed against a woman.

Wang said their team started the job from scratch. Some young police officers did not know how to recognize suspects at the very beginning, but after a while, they learned from experience.

Another team member, Zhang Jisheng, added they need to work in disguise in order to avoid alerting sexual offenders. "Once a colleague changed his look by wearing sunglasses, a hat and a backpack in succession so that the suspect could not recognize him," he said.

Even though police officers like Liu and Zhang are disappointed when victims do not want to identify criminals, or see suspects getting on the train and cannot follow due to the dense crowds, they feel proud of what they are doing. From a six-member team to the current 30-member team, Wang said public support makes them feel their work worthwhile.

Under the current environment, more and more women are choosing to talk about their experience of sexual harassment. This experience in a public place, especially public transport, is quite common and a universal problem.

In addition to Beijing, Shenzhen, South China's Guangdong Province, has also carried out similar work and posted a slogan recently: "Feel free to wear beautiful skirts! We are responsible for arresting harassers!"

Pay attention to the surrounding situation when waiting for train. Don't be absorbed in your mobile phone.

Walk away immediately from suspicious people.

Look behind you in subway stations every now and then to avoid thieves and sexual offenders.

Don't turn your back to suspicious people in the train. Stand facing them.

Call the police after being sexually molested, or ask help from staff in subway station.

Don't be afraid of retaliation. Be brave and report harassers to the police.