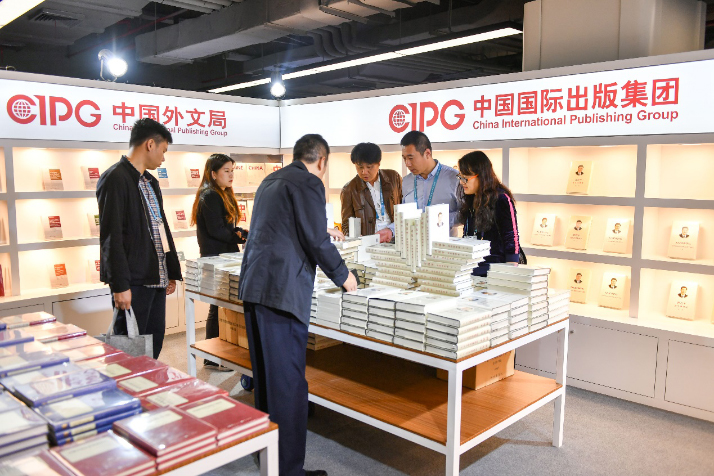 Visitors at the China International Publishing Group's booth at the Second CIIE in Shanghai on November 8 (Photo: Beijing Review)

When the Second China International Import Expo (CIIE) was only on its third day on November 7, all the copies of the French edition of Xi Jinping: The Governance of China had sold out at the booth of the China International Publishing Group (CIPG).

The book, published in two volumes by the Foreign Languages Press (FLP) affiliated to the CIPG, a Chinese media conglomerate mainly targeting international readers, provides insights into the political philosophy of President Xi Jinping and the development of China, based on the writings and speeches by Xi. Translated into multiple foreign languages, it has generated wide interest at home and abroad.

"France is one of the guest countries of honor at this year's expo. Many French visitors came to our booth and bought a copy of the French edition," Xia Zhengrong, in charge of the CIPG booth, said.

Lars Anke, head of sales projects at HHLA, a German logistics and transportation company that operates container terminals at the Port of Hamburg in Germany, said he had heard about the German edition of the book but didn't have the chance to read it. He hadn't expected that he would come across the German version at the Shanghai expo.

Other China-themed books have been warmly received at the bustling fair too. 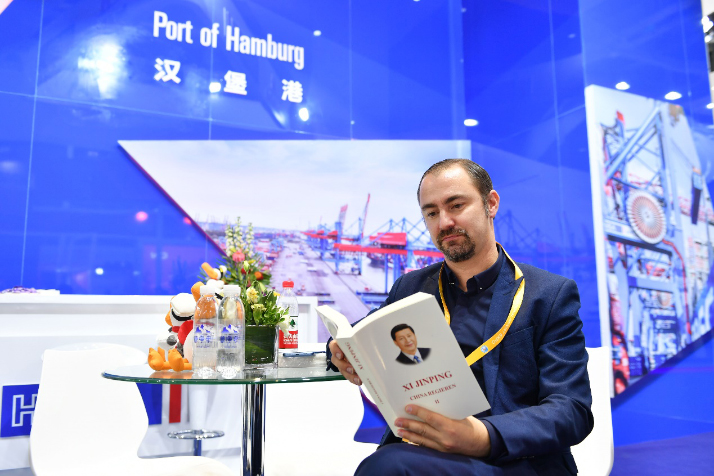 Lars Anke, head of sales projects at HHLA, a German logistics and transportation company, reads the German edition of Xi Jinping: The Governance of China during the Second CIIE in Shanghai on November 8.

Anke is especially aware of the initiative. Thanks to it, he said the China-Europe freight train service has opened, making Hamburg a maritime and railway transportation hub between China and Europe. He hopes to gain a better understanding of the Belt and Road Initiative and the Chinese wisdom embedded in it from his new book.

Chinese visitors also showed interest in the titles by CIPG-affiliated publishing houses. Jin Jiawei, who is majoring in Spanish at Sanda University in Shanghai, bought a Spanish version of China. Published by the FLP, it offers a panoramic view of the country through history, geography, culture and law.

Jin, who works as a part-time tour guide, plans to give tourists from Spanish-speaking countries a better picture of China. And the book, he said, will be his resource.