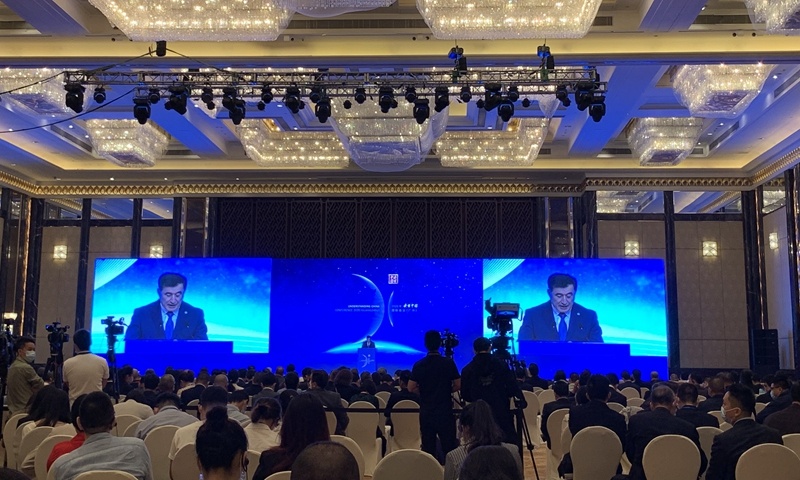 A view of the opening ceremony of Understanding China 2020 Conference in Guangzhou, capital of South China's Guangdong Province on Friday. (Photo: Global Times)

Chinese President Xi Jinping sent a congratulatory letter on Friday to the opening ceremony of the Understanding China Conference 2020 in Guangzhou, capital of South China's Guangdong Province - a platform that showcases Beijing's commitment to deepening reform and opening-up amid rising unilateralism.

This year, the two-day conference which kicked off on Friday, is themed "big transformation, big test and big cooperation- a new path to China's modernization and the creation of a community of shared future for mankind."

According to the organizing committee, the conference will also provide the world with a deeper understanding of the spirit of the fifth plenary session of the 19th CPC Central Committee, which concluded in late October. A communiqué was released after the meeting, which outlined the main objectives of the 14th Five-Year Plan - to seek new achievements in six areas - and the long-term vision to realize socialist modernization by 2035.

China will take "great responsibility" in a world where some countries dismiss a rules-based international system and neglect the value of international cooperation, Ernesto Zedillo, former president of Mexico, said in a video speech during the opening ceremony.

"The global powers, joined decisively by enlightened emerging countries, can decide to work together on the other path … which are good for every country and constitute the most probable outcome," Zedillo noted.

"It can be said that China has saved the world economy twice: first with a giant investment program following the global financial crisis of 2008-2009, and now with a rapid recovery from the successful fight against the coronavirus in the country," Norov stressed.

Understanding China Conference has gathered about 150 international guests featured world-famous politicians, scholars, strategists, entrepreneurs, ambassadors and international organizations from over 20 countries and regions, including the US, Russia, Europe, Japan, South Korea and Singapore.

During the two-day meeting, participants are expected to attend in-depth discussions, seminars and forums with topics including the new infrastructure and new manufacturing, China's financial challenges and opportunities under the dual-circulation strategy and tech innovation and global cooperation.