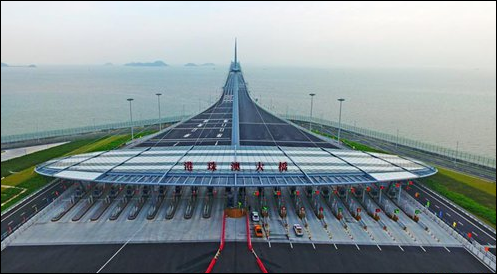 Aerial photo taken on Oct. 24, 2018 shows the toll gate of the Hong Kong-Zhuhai-Macao Bridge in Zhuhai, south China's Guangdong Province. The bridge officially opened to traffic at 9 am on Oct 24. (Photo: Xinhua)

In its first year, the Hong Kong-Zhuhai-Macao (HZM) Bridge was underused, and one expert said this was mainly because supporting facilities in Hong Kong were not in place and regional, integrated development was insufficient.

Thursday marked the one-year anniversary of the launch of the 55-kilometer-long bridge. A total of 24.43 million passengers had traveled through the Chinese mainland, Hong Kong and Macao via the bridge as of Wednesday.

According to data released by the Department of Transportation of South China's Guangdong Province, 66,900 passengers travel on the bridge daily, which is higher than the 48,000 predicted when the bridge was opened to traffic a year ago.

However, the number of cars and buses that have traveled on the bridge totaled 1.54 million, about 4,212 daily. This figure is far below the Hong Kong government's forecast of 9,200 - 14,000 in a project feasibility report carried out in 2008.

Inconvenient customs points, with only a small number of dual license plates for Hong Kong and Macao vehicles, as well as a lack of economic integration jointly caused the underuse of the bridge, Mao Yanhua, a professor at the Institute of Guangdong, Hong Kong and Macao Development Studies at Sun Yat-sen University, told the Global Times on Thursday.

To expand traffic flow, the three regions should step up cooperation to overcome the obstacles posed by different laws and regulations, Mao said. "For example, Hong Kong doesn't allow Macao cars to stop at Hong Kong and then go on to Shenzhen. In addition, the number of cars with dual plates accounts for a portion of the city's total cars. Even though Guangdong welcomes passengers from the two cities, how can traffic flow across the bridge rise?"

This problem also indicates that economic cooperation within the region is insufficient, Mao said. "The bridge connects the western part of the Pearl River Delta area on the mainland side. But the manufacturing and export industry in this part is not as mature as that in the eastern part [where Dongguan is located]. Hence, there are not many logistics buses going through the bridge," he said.

Therefore, coordinated development should be strengthened in the region to put the bridge into full use and help Hong Kong and Macao release their development potential, Mao said.

Separately, the two governments have also agreed to increase the quota for mainland cross-boundary private cars using the bridge by 500, the website said.

The construction of the 55-kilometer-long bridge started in 2009 and cost about 120 billion yuan ($17 billion).