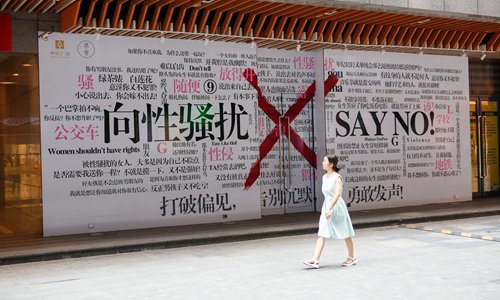 A woman passes a poster that reads "say no to sexual harassment" on the wall of a shopping mall in Xi'an, capital of Northwest China's Shaanxi Province on Friday. Many victims in China have spoken up against sexual harassment in recent months. (Photo: IC)

A misunderstanding between a female and a male student at Tsinghua University, one of China's top institutions of higherlearning that led to an accusation of sexual harassment has sparked a huge controversy about feminism on Chinese social media.

A female student at the university posted an accusation of sexual harassment against a fellow male student on WeChat on Friday. According to the post, the woman said that while she was in the university's canteen, she felt someone touching her buttocks. When she turned around, she saw the male student standing behind her and assumed it was him. The post then went on to reveal the student's identity, with an explanation that she wanted his reputation to suffer for the incident.

However, on Saturday a teacher at the university told media that they had checked security footage from the canteen and discovered that the true culprit was the male student's bag, which has brushed up against the young woman, adding that the female student later apologized to the male student for the misunderstanding it had caused.

Some netizens later posted screenshots on China's Twitter-like Sina Weibo of what they claim are chat records from the woman's phone that show she did not apologize in person, but rather asked a teacher to pass on the apology to the male student.

The story has enraged many Chinese netizens, leading to the related hashtag getting more than 1.3 billion views on Sina Weibo.

Some netizens said that the female student's accusation was the result of "excessive feminism" or "female hegemony."

"She brought a false charge against the male student before figuring out what the truth was and exposed another person's personal information without permission. The woman was quickly believed since she is a member of a vulnerable group that often experiences sexual harassment, which damaged the man's reputation even though he had not done anything wrong," a netizen voiced their discontent on Sina Weibo.

"I do not think this is excessive feminism. The public does not always support women when they charge someone of sexual harassment or abuse," Luo told the Global Times on Monday.

"Many women are usually questioned if their sexy clothing is the root cause of these sexual harassment incidents when they fight for their legal rights."

Luo said that this is an individual case and cannot become a reason to attack feminism in general as one woman's behavior should not be held against all women, just like a single man's crime of sexual abuse cannot represent all men.

Some netizens hold a similar view as Luo.

"Women are often sexually harassed in daily life, so we should not deny all of the female students' actions, including her brave action to confront the suspect, just because of some mistakes made during the process," netizen "Duqiansi" commented on Sina Weibo.