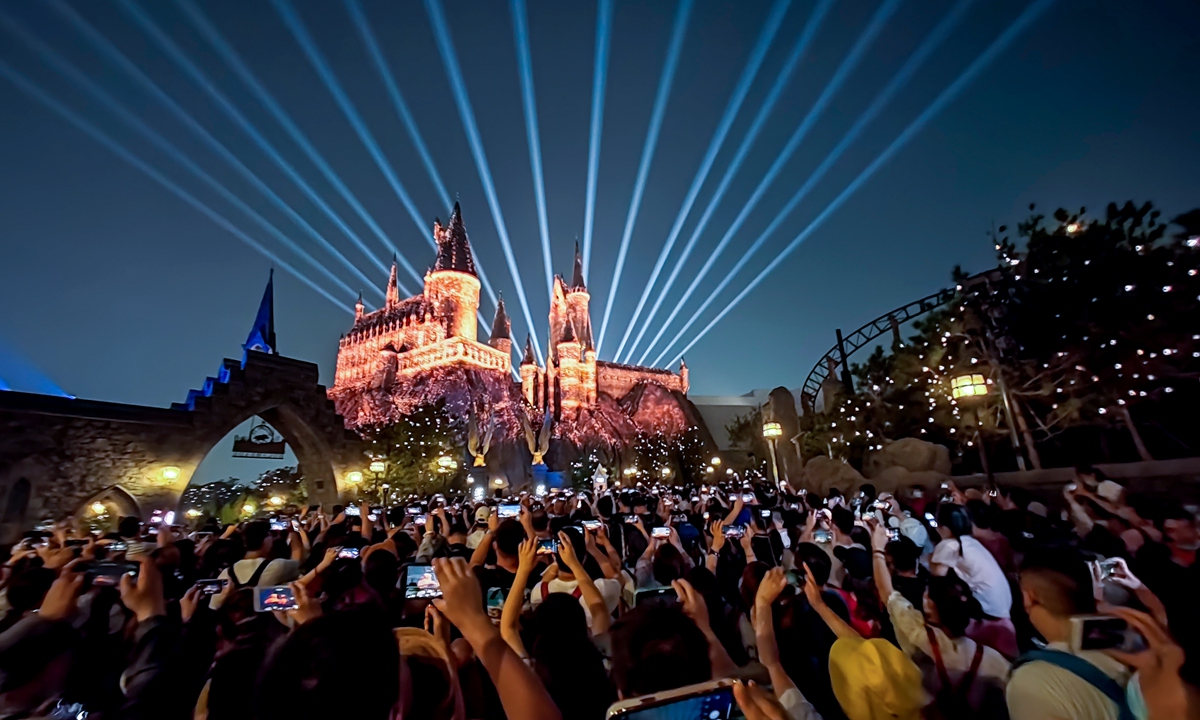 Visitors to the Universal Beijing Resort take photos of a light show at Hogwarts Castle in the Wizarding World of Harry Potter zone on September 3 during its trial opening. The park started ticket pre-sales on Monday at midnight, with tickets for the official opening day on September 20 snapped up in half an hour. (Photo: VCG)

Harry Potter rides, the Jurassic World Adventure and Minion Land… Chinese social media platforms were flooded with posts and photos posted by the lucky visitors to the Universal Beijing Resort theme park during its trial opening starting September 1. This is a rare time in a long while when an America-themed topic has attracted such obvious and widespread praise in China.

The popularity enjoyed by the theme park is in sharp contrast with the cold shoulder given to the Sina Weibo account of the US Embassy in China, which will be flooded with negative comments whenever the account posts something. There has been no public backlash toward the park, which is contrary to the "pervading anti-US nationalism" in China portrayed by Western media. Why is that?

Donning a Harry Potter cloak, a magic wand in one hand, a giant glass of Butter Beer in the other, 30-year-old Liu Chenxi said Tuesday that the day she spent cosplaying at the resort's Wizarding World of Harry Potter zone had given her the most happiness she's felt in a long time.

Liu was surprised to find others dressed just like her, drinking the same beer. "It's like I've found my tribe, and they're all living in Hogwarts."

"I was super fascinated about Harry Potter when I was a child. Being there in the Universal Beijing Resort threw me right back to that kind of carefree happiness, which can only be felt in one's childhood," Liu told the Global Times.

The park started ticket pre-sales to the public on Monday midnight. People stayed up late for the moment and tickets for the opening day of September 20 were snapped up within half an hour. A few hours later, tickets for the upcoming Mid-Autumn Festival and National Day holidays were sold out. The ticket sales system crashed once due to the excessive number of visits. Tickets prices range from 418 yuan ($66.34) to 748 yuan.

Zones based on popular properties in China such as Harry Potter and the Transformers Metrobase featuring the evil Megatron attracted long lines. But there are some Universal firsts, including the Kung Fu Panda Land of Awesomeness.

Li Wei, 43, despite not having Harry Potter in his childhood, enjoyed his day out at the park, the first Universal Studios theme park in China. "It's a place where you can spend the whole day having fun with your family," he said.

Li's 5-year-old son loved the Kung Fu Panda zone and spend the longest time there. "They are really dedicated to catering for Chinese consumers, and they took care to really appeal to Chinese people. And foreign employees there speak fluent Chinese. All the slogans are in Chinese. Really convenient!"

Qin Gang, Chinese Ambassador to the US, shared his experience of a rollercoaster ride at Universal Beijing Resort before he left for the US. He tweeted that his rollercoaster ride has reminded him of "the shape of China-US relations. After all the tumbling and shakes, the rollercoaster came to a soft landing in the end." 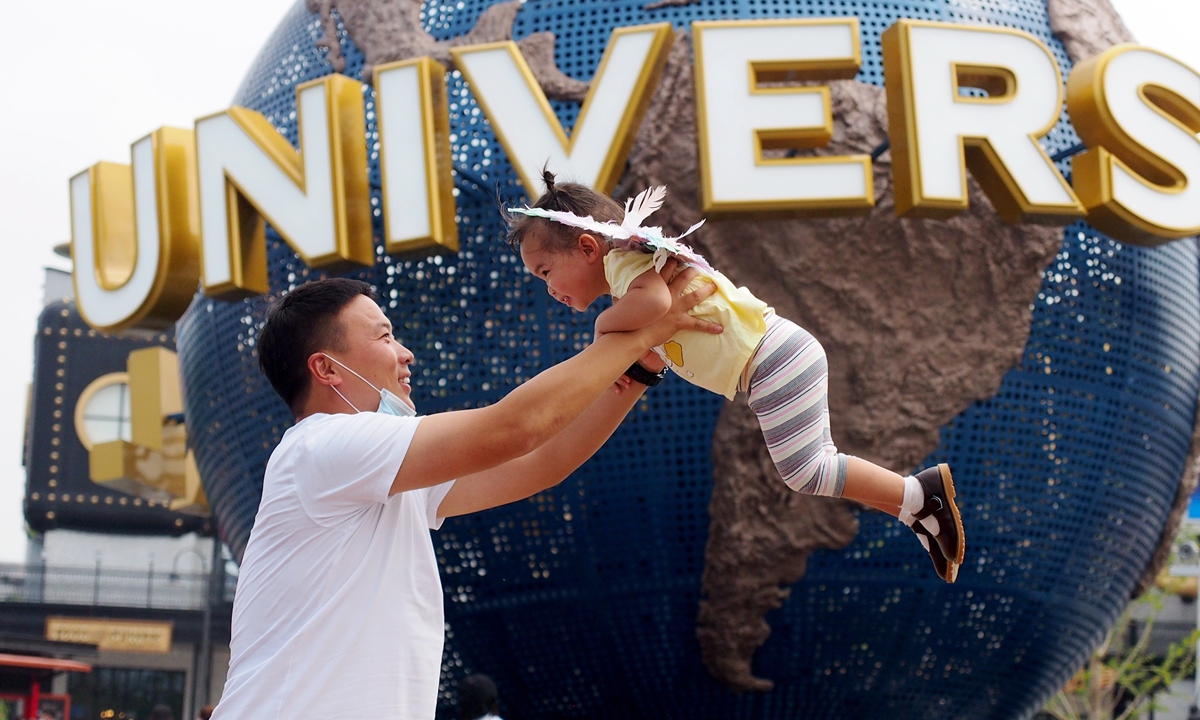 A father holds his baby in front of the logo of the Universal Beijing Resort on Monday. The resort, which is expected to open on September 20, has become a popular destination on Chinese social media during its test run, which began on September 1. (Photo: VCG)

The theme park, involving hundreds of billions yuan of investment, is co-invested by a Beijing-based state-owned company and Comcast NBC Universal broke ground in 2001 in the southeast suburbs of Beijing, when China and the US were about to walk hand in hand in a closely intertwined period of cooperation. It opened at a time when the bilateral relationship has hit the lowest point in decades.

When the two countries are locked in a series of conflicts, ranging from human rights to trade, Western media and think tanks have portrayed Chinese society as consumed with "anti-US" sentiment. Yet the great popularity of the Universal Beijing Resort, and the huge success of other US companies, including Starbucks and Shanghai Disney Resort, indicate otherwise.

Starbucks, for example, saw revenues in the Chinese mainland grow 45 percent to $910 million in the third quarter of 2021 fiscal year. The company's speed of opening new shops in the mainland also caught up with pre-pandemic levels, when the beverage firm opened 162 new shops from April to June 2021, bring the total number of stores in the mainland to 5,135, according to Starbucks' latest financial report.

Executives from Shanghai Disney Resort have also expressed confidence and expectations for the mainland market's potential. The US entertainment giant, which recently celebrated the fifth anniversary of its Shanghai theme park, has seen robust business with the park's attraction to domestic customers not impacted by the coronavirus pandemic.

"Shanghai Disney resort has exceeded our expectations since Day 1 and it has expanded faster than any Disney theme park in our company's history," Josh D'Amaro, Chairman of Disney Parks, Experiences and Products said via a video speech recently. "We're committed to continuing our investment... I'm incredibly optimistic about the future of Shanghai Disney resort," he said.

Joe Schott, president and general manager of Shanghai Disney Resort also disclosed at a recent celebration activity that the resort is actively pushing further expansion and progress in the mainland, such as partnering with China Eastern Airlines to launch another Disney theme plane soon.

By 2020, more than 83 million trips were made to the tourist region centered on Shanghai Disneyland since it opened in 2016, and the resort sold 5.77 million stuffed toys. Due to the COVID-19 pandemic, Shanghai Disneyland received 5.5 million tourists in 2020, and revenue was 52 percent of the previous year. However, it saw the best recovery of all theme parks worldwide.

Liu Ya, who lives in Shanghai and is a frequent visitor to Shanghai Disney, told the Global Times that enjoying US theme parks does not necessarily mean embracing its culture overall.

She said the US' entertainment culture, advanced technology and academic system are attractive, yet she also feels the US is being "obnoxious" when it invaded Afghanistan, attempts to thwart China's development by imposing technology blockade and "touches our nerves by playing the Taiwan and Xinjiang cards."

Zhang Yiwu, a professor at Peking University said that Chinese society is not nearly as "hotheaded" as Western media portray and instead is rather "rational." "Chinese people are inclusive. We embrace whatever is good for us and we welcome foreign companies that respect our culture."

"There's never been a systematic and overall anti-US sentiment in China. When the Chinese public denounces the US crackdowns or smears against China, they target US government… From a cultural level, people from the two countries can relate to each other in many ways, for instance, Starbucks, McDonald's and KFC are part of our lives. Also, 'made in China' products are the backbone of Americans' daily lives," Lü Xiang, a research fellow at the Chinese Academy of Social Sciences in Beijing, told the Global Times.

The expert said jokingly that "some US politicians have been clamoring for decoupling, then they should first ask Starbucks where it will relocate its more than 5,000 shops in China."

In a recent report published by the American Chamber of Commerce in China in March, which surveyed many US companies with business in China, 61 percent of the surveyed US firms saw China has their top investment priority and expressed confidence in the prospects of China further opening up to overseas companies.

Some 56 percent of the respondents said they made money in the Chinese market in 2020, and about 75 percent of the US companies said they are optimistic about achieving growth in China in the next two years, as well as China's economic recovery trend.

Yet Zhang warned that hostile US policies are already eating up positive Chinese public opinion.

According to a poll released in May, an overwhelming 74 percent of Chinese respondents said they held a negative opinion against the US after President Joe Biden took office.

"Bilateral ties spiraled down rapidly during the Trump administration, and Biden took a similar stance, doing nothing substantial to fix ties. Yet the US needs to understand positive Chinese public opinion means market for the US companies," Lü said.

Echoing Lü, Zhang said that smooth people to people and cultural exchanges serve as a small window that assuages the tension between Beijing and Washington. "If the US keeps going down the current path, that small window will eventually close, and at that time there will be no way back."

As he wandered around Universal Beijing Resort, local resident Hu An was amazed by the number of visitors and their spending power. "Only a fool chooses to steer away from China," he said.