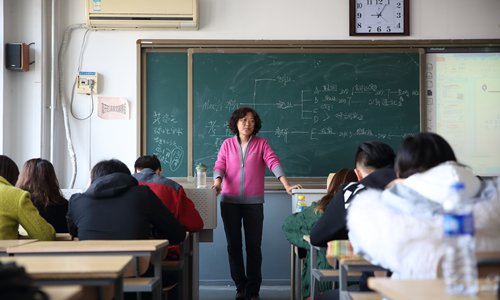 A teacher has a class with students. Photo: IC

A recent admission notice published by Beijing Foreign Studies University (BFSU), one of China's leading language universities, has told students that they can apply for 30 language majors without having to pass the tough national college entrance examinations. Compared with last year, the Global Times found that the new admission notice, which added two more language majors, is placing more emphasis on options for less commonly taught languages. New languages such as Nepali, Bengali, and Slovak were added, and most of them were languages of countries participating in China's Belt and Road (B&R) initiative. The university also stressed that it encouraged students to apply for those languages, and the number of majors available this year is six more than last year.Apart from BFSU, Shanghai International Studies University (SISU), another cradle for language talents, also began recruiting Uzbek majors this year. The university has just opened Polish, Czech, and Kazakh majors and plans to add Serbian, Swahili and Malay language courses in the next two years. Analysts said that the new changes in Chinese universities were a response to the country's B&R initiative and will play a crucial role in providing language talents to promote China's extending economic ties with other countries.  Earning trust"As China has been expanding its cooperation with the participating countries of the B&R initiative, talents proficient in less commonly taught languages are essential to communicating with local enterprises and earning their trust," Xu Ye, director of the BFSU's recruitment office, told the Global Times. The BFSU has not only paid great attention to training students in basic language skills, but is now also focused more on cultivating their professional knowledge in trade and infrastructure, said Xu. According to Xu, the university plans to recruit 30 more students in 2018 than in 2016. "It may be a small number, but reflects the expansion of the less commonly taught languages talent market." In March 2017, the university said it will add 11 language courses, mostly African and Oceanic languages, to boost talent support for the country's expanding ties with those regions. Language courses including Kurdish, Maori, Tongan, Samoan and Comorian will be offered to undergraduates from September. "Previously, we were used to getting acquainted with the surrounding countries from the perspective of European countries. Along with the increasing interest that these countries have shown in China, we began to realize that we should deepen our understanding on our own. Therefore, language is becoming extremely important for China to know more about the outside world and promote even wider communications on the global stage," Wang Yiwei, director of the Institute of International Affairs of Renmin University of China, told the Global Times.To cultivate all-round language talents, BFSU's China Language Assessment has also developed an English Test for International Communication (ETIC). Its aim is to specifically select talents with a global mindset and corporate awareness who can accomplish cross-culture communication and solve problems using foreign languages."ETIC has already had some backwash effect on language teaching at Chinese universities and is a driving force to reform. Many universities have held series of lectures about the B&R initiative and the cultivation of international talents," Li Huiqin, Director of Higher English Education Publishing with Foreign Language Teaching and Research Press, told the Global Times, adding that the press has also published several books on research into countries and regions along the new Silk Road in the past two years.Further exchangesMany students majoring in less commonly taught languages interviewed by the Global Times expressed happiness about the changes. According to a survey conducted on 2,000 people aged 18 to 35 by China Youth Daily in June, 65.6 percent are confident that the initiative will create more jobs, while 82.1 percent say they hope for more plans for international talent exchange."The wide participation of Chinese universities offers us more chances to interact with other countries through study exchange programs. It will also help us to apply for further study and go deeper in our academic research," Lin Jie, a Russian major from BFSU, told the Global Times. "But to be honest, I have not felt obvious changes in my employment prospects," said Lin. An official from SISU's recruitment office said that the employment rate and market demand for such languages in participating countries have increased in the last three years. "For example, the employment rate of Greek, Arabic and Thai languages majors can be as high as 100 percent," he said. Both BFSU and SISU officials said that the largest obstacles to training those language talents is the shortage of qualified teachers and resources, and they are currently seeking cooperation with partner universities around the world to resolve this issue.