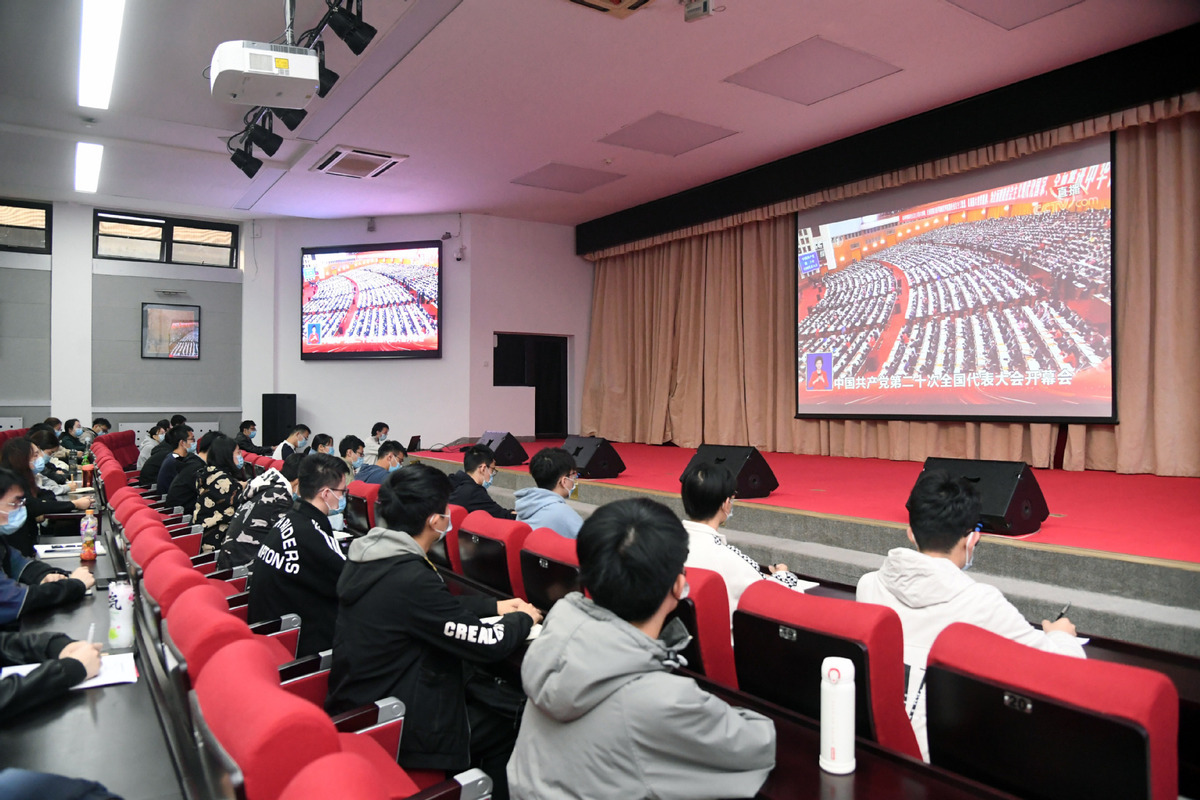 Students at Beijing Jiaotong University gather to watch the opening of the 20th CPC National Congress on Oct 16, 2022. (Photo: Xinhua)

It was Sunday but not an off day for Filip Filipovic, a master's student at the School of International and Public Affairs at Shanghai's Fudan University.

He chose to spare the whole morning for the live broadcast of the opening session of the 20th National Congress of the Communist Party of China, due to both his academic interest and personal concern.

As a young man born during a war and at a time when Europe, where his home country of Serbia is located, is experiencing a new series of turmoil and changes, Filipovic said he has been interested in China's foreign policy.

"It is assuring to see that China is as stable as ever," Filipovic said. "This is in stark contrast to the drastic changes and even turmoil at the international level over the past five years. Against the background of crises such as the COVID-19 pandemic, China, which has been undergoing profound changes unseen in a century, has demonstrated stability and inclusiveness."

He said he is most impressed by China's firm adherence to an independent foreign policy of peace, citing the report delivered by Xi Jinping at the opening session that China stands firmly against all forms of hegemonism and power politics, Cold War mentality, interference in other countries' internal affairs and double standards.

With reference to Serbia being a part of the Belt and Road Initiative, Filipovic said he is happy to see that his country has achieved unprecedented economic development through the initiative. He also believes that China will implement a more proactive opening-up strategy in the years to come.

Noah Andrea Namwamba, a doctoral student at the School of Media and Communication of Shanghai Jiao Tong University, said he was most impressed by the Party's determination to deliver its promise of common prosperity.

"China has made a promise to the people to revitalize the countryside and achieve common prosperity. I have witnessed the fulfillment of this promise during my years here in China and shared my observation through videos on social media," said the Kenyan student. "I hope China's experience of poverty alleviation can help more places in the world get rid of poverty."

Kunthira Hirankittikul, a master's student at the International Cultural Exchange School of Fudan University, watched the congress' opening session with fellow students on campus. Many universities in Shanghai opened their auditoriums for the students to watch the live broadcast of the session before holding discussions.

Hirankittikul said she was very impressed by Chinese students' patriotism. "You can feel how much the country is loved by each and every Chinese and they feel so proud of their motherland," she said.

Zhang Yunqi, an undergraduate at Shanghai International Studies University, said she was inspired by the Party's commitment to the country's national policy of opening-up. Zhang, who served as a volunteer at the 4th China International Import Expo last year, said the major fair is one example of this policy.

"The CIIE has been successfully held for four consecutive years and this demonstrates China's determination to continue to expand opening-up, promote inclusiveness, and adhere to mutual benefit and win-win results," said Zhang, who will volunteer at the 5th edition of the expo in November as well.

"The Chinese youth volunteers at the CIIE who serve at the forefront of the country's opening to the outside world will show the world the character of the young generation. We will serve guests from all over the world with enthusiasm and show the world a more open and inclusive China."

Liu Liangtao, a master's student of translation studies at SISU, shared the same sentiments, noting that through his own overseas volunteering experience he has gained a deeper appreciation of peace and stability, which he said China has provided for its citizens.

"As a student of SISU, I feel responsible for living up to the expectations of the Party and the people to tell China's story well, to spread China's voice and to make new contributions to building a community with a shared future for mankind," he said.