CHINA Unlike the US, China seeks to cooperate with other nations in space exploration

Unlike the US, China seeks to cooperate with other nations in space exploration 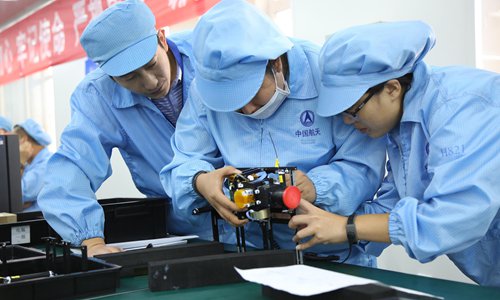 Unlike the space race during the Cold War, nations are looking forward to working together to explore the moon and Mars.

As the US attempts to build a Space Force and develop Martian colonies on its own, European nations and Russia are likely to join hands with China in the field of space exploration, a field in which China is experiencing a golden age, analysts say. "China has its own space program, and it moves at its own pace, but it's also open to collaboration," Pascale Ehrenfreund, who heads the German Aerospace Center (DLR), was quoted as saying by Germany's broadcaster Deutsche Welle.Jan Woerner, director general of the European Space Agency (ESA), has told the Xinhua News Agency that the ESA is also discussing using China's manned Shenzhou spacecraft to send European astronauts into space in the future. The director said several of their astronauts are learning Chinese to prepare for the mission. The China National Space Administration (CNSA) said in April that China intends to have wider international cooperation in with lunar and deep space exploration and had talked with Russia  and the European Space Agency about it, Xinhua reported.Both the EU and the US have decreasing desire to invest in space exploration projects, while China has garnered unprecedented support from the public, Wang Ya'nan, deputy editor of Aerospace Knowledge magazine, told the Global Times on Monday.China's space development program is in its "best phase," Wang noted. Only a few nations have the ability to launch spacecraft and the industrial chain to do so. The EU is eyeing China's advanced technological advantages in launching spacecraft, in an attempt to follow China to explore outer space amid the "scientific revolution," Li Zheng, a research fellow with the China Institute of Contemporary International Relations, told the Global Times.There are existing collaborations between the EU and China, like China's upcoming moon mission, Chang'e 4.The Chang'e 4 probe will carry scientific payloads developed by the Netherlands, Sweden, Germany and Saudi Arabia, and an advanced small analyzer, developed in Sweden, to study the interaction between solar winds and the moon surface, Xinhua reported. The probe is expected to touch down on the far side of the moon and will carry the first flowers to blossom on the lifeless lunar surface.International cooperation could create more commercial potential and narrow the technology gap with the US, experts noted. Arms race arena Wang pointed out that China considers its space dream to be a part of the dream of all humankind, which differentiates it from the US. China welcomed all member states of the United Nations to jointly utilize its future space station, a move that further demonstrates China's unwavering belief that outer space is a common home for all humanity rather than a new battlefield, Xinhua reported. When the International Space Station retires in 2024, China's space station may be the only one left in service. China's space station will include a core module and two lab modules, with ports that will allow multiple spacecraft to dock. China has altered its space development direction from a focus on defense that was set in the early days of the country to a focus on space, Wang noted, which fits with the willingness that other nations have in launching joint space projects, especially developing countries.The US, however, believes that space will be the new arena of the arms race that the rest of countries fight for. It expects to maintain its cutting-edge position in military competition through projects on the moon or Mars, Wang noted. US President Donald Trump's administration has announced an ambitious plan to usher in a new Space Force as the sixth branch of the US military by 2020.Even though the US wants to start a space arms race, China and Russia, as the targets of the US, will not follow its steps, analysts say.