CHINA Unlike the US throwing around its naval weight , development of aircraft carriers is unlikely to make China aggressive

Unlike the US throwing around its naval weight , development of aircraft carriers is unlikely to make China aggressive 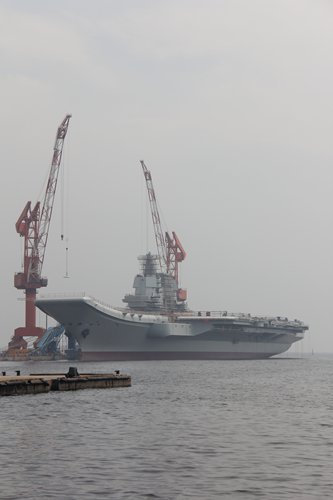 China's first domestically-built aircraft carrier launched its sea trial on Sunday, but experts say this is just the beginning. China needs at least six such vessels to build two fleets to deploy in the West Pacific Ocean and Northern Indian Ocean. At least four of these carriers must be nuclear-powered.

The country's first carrier is the Liaoning, or Type 001, which was purchased from Ukraine and was refitted at the shipyard in Dalian that built the new carrier. Liaoning's main role is to act as a training platform for the People's Liberation Army (PLA) Navy. It also has combat capability. Both the Liaoning and the latest one are conventional powered medium-size aircraft carriers.

These war fleets offer the US capability to launch military operations worldwide, but China's defense strategy is different, so Beijing will not try to build so many aircraft carriers, Wang Yunfei, a Beijing-based naval expert and a retired PLA Navy officer, told the Global Times on Tuesday.

Although aircraft carriers are used for overseas military operations, China's effort at developing them doesn't mean it is seeking naval hegemony like the US, Wang said. "The PLA Navy's mission is to safeguard China's sovereignty, territorial integrity and national interests, rather than play 'world police.'"

China will deploy the aircraft carriers in the regions important to its national interest. Currently, the Western Pacific Ocean and the Northern Indian Ocean are important for the country's national interests, said Senior Colonel Zhang Ye, a research fellow at the PLA Naval Research Institute.

Most of China's security concerns emanate from the Western Pacific Ocean, including Taiwan and the South China Sea. The Northern Indian Ocean is significant since China's economic development and energy supply depend on the crucial trade routes that pass through the region.

The Liaoning has conducted several cruise and training missions in the West Pacific Ocean, including circuit navigations surrounding Taiwan Island and combat training in the South China Sea.

In order to deal with the worst-case scenario in the two regions, China at least needs six aircraft carriers, experts said. It needs to maintain effective military presence in the Pacific and Indian oceans and in 10 to 20 years, China will complete this goal. Ideally, four of these carriers will be nuclear-powered, Wang said. "They won't make China more aggressive just improving its capability to defend its interests. It is almost impossible to see a massive naval battle between China and other naval powers in regions far from Chinese territory."

In the short run, China is unlikely to use its carriers for a conflict with any country, Zhang said. "They will more likely be used for non-combat purposes such as UN missions for anti-piracy, disaster relief, peacekeeping and evacuation."

Learning from the US

Although China won't seek global deployment of aircraft carriers like the US, the two countries' objectives in terms of technology and quality of the carrier would be similar, Zhang added. "We are learning from the US now."

The US possesses more advanced technology than China in this  sphere, said Hu Bo, an expert at the Institute of Ocean Research at Peking University. "For instance, the US has carrier-based fixed-wing early warning aircraft, but China doesn't."

Currently, China's two carriers use ski-jump ramp to launch aircraft into the air, hence they are incapable of launching carrier-based fixed-wing early warning aircraft as they are heavier.

However, Wang said China's next generation carrier will use catapult technology, which will enable the launch of carrier-based fixed-wing early warning aircraft. Currently, China's third aircraft carrier, which is a next generation vessel, is reportedly under construction in Shanghai.