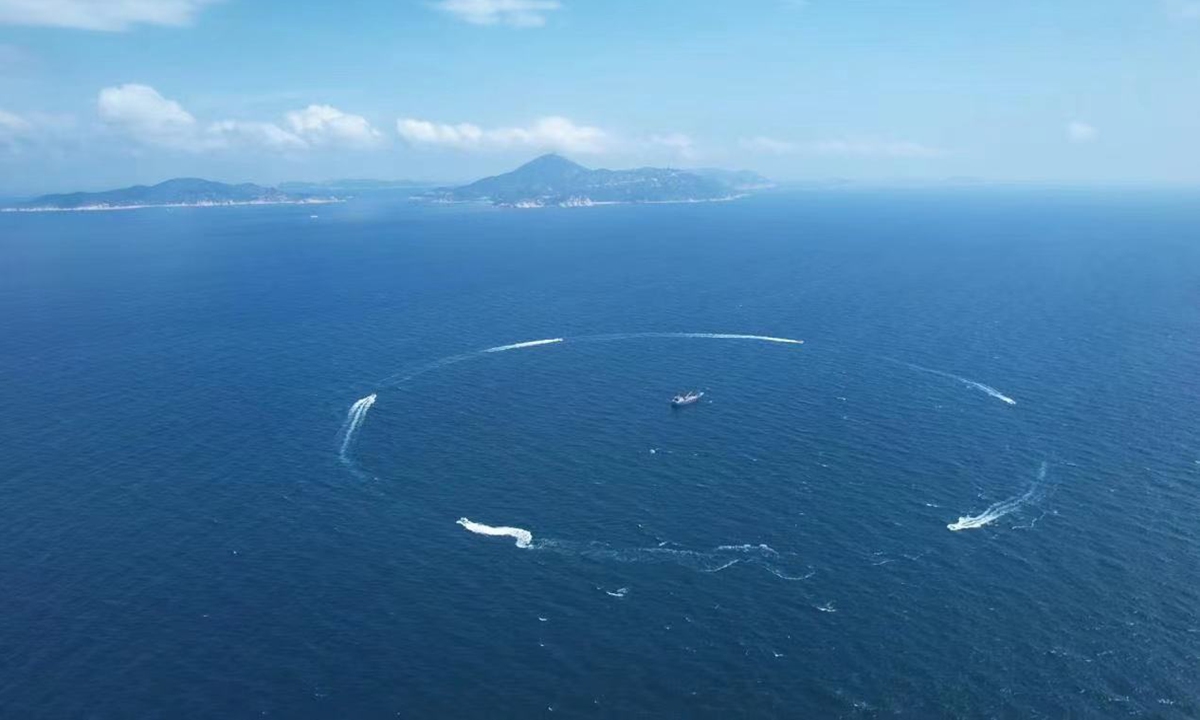 An unmanned high-speed vessel developed by Yunzhou Tech, a leading developer of unmanned surface vehicles, has achieved a breakthrough in its dynamic cooperative confrontation technology, which could quickly intercept, besiege and expel invasive targets, marking a milestone in maritime unmanned intelligence equipment development, the Global Times learned on Sunday.

Compared with manned vessels, ship drones have the advantages of low cost, multiple functions, strong scalability, high mobility and long duration. They can adapt to special and extreme environments, and they have huge advantages in maritime development and rights protection.

A video posted by the company shows six high-speed unmanned vessels cruising and guarding Chinese sea territory in a highly dynamic, complex environment. They conduct collaborative perception, high-speed tracking, evidence collection, interception and expelling unknown targets at sea. During the whole process, the ship drone swarms can make decisions completely on their own.

As the basic mode of the future, featuring unmanned intelligent equipment at sea, unmanned ship swarms are the focus of the industry. Domestic research on unmanned ship swarms started late, with the US, Israel and other countries imposing a technological blockade on China. The company has made remarkable achievements by adhering to the road of independent research and development, Cheng Liang, general manager of Yunzhou Tech, told the Global Times.

In 2018, Yunzhou Tech carried out a collaborative demonstration of a 56-boat unmanned swarm in a Chinese sea area, where it verified the effectiveness of route planning, formation control and conflict resolution algorithms within the cluster, and demonstrated small unmanned ship simulations of large surface targets and multi-formation autonomous transformation technology, setting a world record for unmanned ship swarms.

Industry experts said that there are many problems for unmanned high-speed ships in high sea conditions and highly dynamic combat environments. For example, it is very difficult to control routes, maintain accuracy and stabilize the platform. Therefore, dynamic cooperation among unmanned high-speed vessels needs to solve the problems of mutual perception, information fusion and action decision.

The cooperative confrontation technology of unmanned ship swarms is an advanced stage of unmanned equipment intelligence development, and there are still many unknown technical difficulties, they said.

Zhang Yunfei, who established the company with Cheng, said that "the company has 10 technologies that lead the world and its ship drone technology is at a similar level with the US."

The company's products have been widely applied in environmental measurement, ocean engineering, public safety, transportation, cultural travel and leisure, and other fields. For example, the unmanned ships play an important role in explosion rescue, scientific research at the South Pole, and sewage treatment.

Cheng revealed that a mother ship, the world's first research ship capable of intelligent remote control and autonomous navigation, will be put into operation next year.

The ship will be the world's first mother ship to realize the coordinated operation of aerial, surface and underwater unmanned systems.

China has a coastline of 18,000 kilometers and 3 million square kilometers of maritime areas under its jurisdiction. Strengthening the marine economy and safeguarding maritime rights and interests bears on national security and long-term development.

"We believe unmanned ships will play an important role in it," Zhang said.