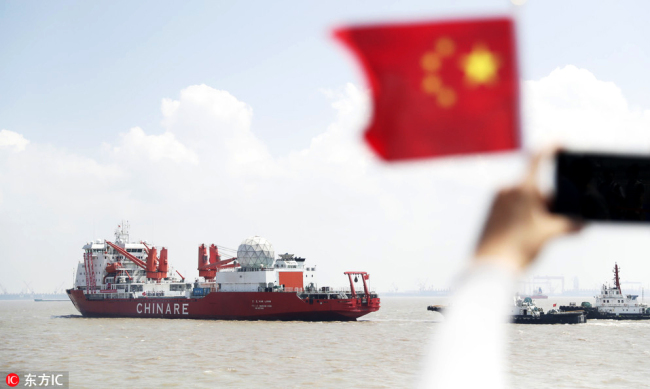 The family of a Chinese scientist takes photos of the icebreaker Xuelong during its departure from the Port of Shanghai for 9th Arctic research expedition on July 20, 2018. [Photo: IC]

During a 69-day journey, the country's self-developed unmanned ice station system was successfully installed for the first time in the Arctic Ocean, ushering in an "unmanned era" for scientific observation of the North Pole.

According to scientists with the Arctic expedition team, the system can perform unattended observation of multiple fluxes in the ocean, the sea ice and the atmosphere, which is key to research on the changes in sea ice and air-sea-ice interactions in the Arctic. The unmanned ice station also boasts a number of independently developed core technologies, such as long-term observation by light radiation inside sea ice.

In addition, Xuelong conducted research in Bering Sea, Chukchi Rise and the Canada Basin in the Arctic Ocean, including the studies that focus on issues such as marine radioactivity, microplastics and ocean acidification.

On July 20, the icebreaker Xuelong set sail from the Port of Shanghai, with a team of 131 researchers from home and abroad, making a two-month trip of 12,300 sea miles.