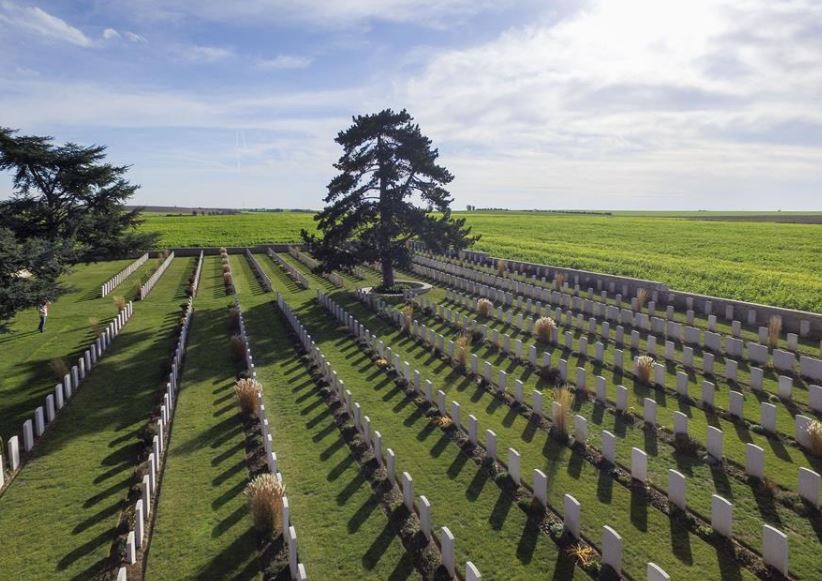 PARIS/SHANDONG, Nov. 12 (Xinhua) -- A century after the Armistice Day that marked the end of the World War I (WWI), stories of Chinese laborers deployed to the war's western front started to receive more attention that they deserve after being overlooked for decades.

Between 1916 and 1918, some 140,000 Chinese laborers completed a tumultuous journey across the sea and risked their lives repairing vehicles, building roads and digging trenches in the battlefields. Many of them never managed to go back home.

For almost 50 years, Cheng Ling could only get a glimpse of the life of her grandfather, Bi Cuide, by one sole possession: a bronze medal with the profile of British King George V on one side.

It is a medal of merit in memory of the demise of Bi, who, along with other Chinese laborers, sent help to the Allies at a time of bloodshed when the male population of Britain and France was depleted.

As the Atlantic grew increasingly dangerous due to violent attacks from German U-boats, the Chinese laborers, mostly from the Chinese Labour Corps (CLC), sailed across the Pacific to Vancouver, crossed Canada by train, and then went to Liverpool and eventually down to France.

In France and other parts of Europe, they took on a variety of grueling labor ranging from assembling shells for artillery and transporting munitions to unloading ships.

Because of their hard work and efficiency, the Chinese laborers were regarded by British and French military officers as the most valuable supporting forces, said a Hong Kong-based British writer Mark O'Neil, the author of a Penguin book "The Chinese Labor Corps."

However, the Chinese laborers back then were frequently referred to as "coolies" and "chinks," and by all accounts not fairly treated.

Despite their non-combatant role, the Chinese laborers were exposed to enemy fire as they dug trenches and thus incurred casualties. And they also suffered from malnutrition and various kinds of illnesses.

They were not allowed to go to other places after work, and had to live together in a compound, added O'Neil.

Even after the war, some Chinese laborers stayed on to clean the war-torn battlefields, remove dead bodies and dispose of mines and helped with post-war reconstruction.

Bi embarked on his journey together with 10 other people in his village, located in eastern China's Shandong Province, from which nearly 70 percent of the Chinese laborers were recruited, Cheng said.

He was killed later in an explosion when cooking for the Allies' soldiers at the front line.

His story and those of other Chinese laborers remained almost untold in the 20th century. But Cheng, at the age of 49 in 2007, would not give up seeking the truth about her grandfather.

Bi left nothing behind, not a picture or a photo, except the medal brought by his fellow villagers who managed to come back. Cheng and her family spent decades looking for a clue about Bi's burial place.

Cheng said she wrote articles for local newspapers about the stories of her grandfather, which were later noticed by the son of another laborer from the CLC. He petitioned the French government on her behalf, as his family settled in France after the war.

In 2008, before the 90th anniversary of the end of WWI, the family eventually arrived at Bi's grave in Beaulencourt in northeastern France near the Belgian border.

"We have been celebrating the lives of all the soldiers who lost their lives but the Chinese laborers were not remembered and were not talked about until three or four years ago," said John de Lucy, a retired property manager who inherited valuable photos of the CLC from his grandfather William James Hawkings, a British officer at the time.

For decades, countries like Britain, France and Belgium attached little importance to the CLC. Few war memorials mentioned China, and history books erased the Chinese laborers from the war, said O'Neil, whose grandfather served as a British officer in the CLC.

"WE CAN CONSIDER THEM OUR COMMON ANCESTORS"

World leaders marched in rain on Sunday to the Arc de Triomphe in Paris to commemorate the centenary of the Armistice Day.

In a bid to highlight the grave consequences of war, young students recited testimonies by WWI soldiers in various languages including French, English and Chinese.

In the lead-up to the anniversary, a group of advocates from Shandong traveled across Britain, Belgium and France, launching exhibitions to raise public awareness of the Chinese laborers.

In September, a bronze statue was installed in front of Gare de Lyon, one of the largest railway stations in Paris, to remember the Chinese laborers.

In other parts of France, as well as in Belgium, commemorations of the Chinese laborers are also underway.

A photo exhibition featuring Chinese laborers during the war attracted some 100 viewers on its opening day in Belgium's western city of Bruges.

Speaking at the opening ceremony, Chinese Minister-Counselor Zhang Chi from the embassy in Brussels said that the show, co-hosted by the two countries, aims to help the young generation better understand this part of history, so that they will cherish peace and carry forward the friendship between the two countries.

In Britain, a group called "Ensuring We Remember" has led a national campaign for a permanent memorial to the CLC of WWI.

Xu Guoqi, a history professor with the University of Hong Kong, believes that the Chinese laborers at the time saved Europe from a bankruptcy of human resources and its civilization, when the European powers were determined to kill each other.

"We can consider them our common ancestors," said Philip Vanhaelemeersch, an Oxford-educated historian, now director of the Confucius Institute with Howest University.

"When we go to places these people have been in the past, we are going on a root-searching journey. I think this is a very good first step for people-to-people exchanges," he said.