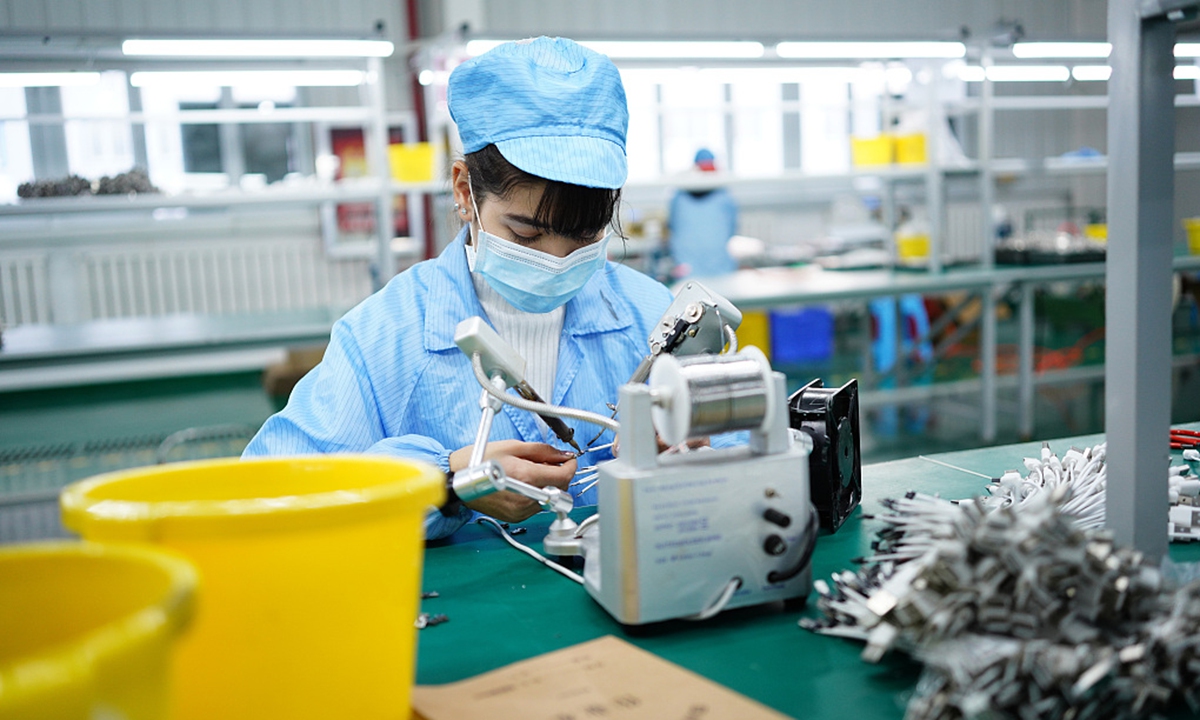 A comprehensive research report on ethnic minority workers from Xinjiang Uygur Autonomous Region working in South China's Guangdong Province will soon be released by the Institute for Communication and Borderland Governance of Jinan University. The report, compiled through field studies and concrete investigations, shows the real situation of these workers, which is totally different from the "forced labor" lies spread by infamous anti-China pseudo-scholar Adrian Zenz in his report.

Zenz fabricated, in his latest report titled "Coercive Labor and Forced Displacement in Xinjiang's Cross-Regional Labor Transfer Program," that "labor transfers of ethnic minorities" in Xinjiang to other regions and provinces are to "forcibly uproot them, assimilate them and reduce their population density."

Nilufer Gheyret is a research fellow of the Institute for Communication and Borderland Governance of Jinan University and co-author of the about 18,000-word report titled "'Forced Labor' or 'Pursuit of Better Life' - Conditions of Xinjiang Workers Working in Other Regions." She told the Global Times that the report wholly uses first-hand on-the-spot interview materials. In order to communicate with the interviewees in-depth and obtain clearer and more detailed materials, the entirety of the interviews are basically conducted in Uygur.

Chen Ning, a research fellow of the Institute for Communication and Borderland Governance of Jinan University and co-author of the report, said the report can be said to be the most "detailed and comprehensive research report" on migrant workers from Xinjiang so far.

"Additionally, our two authors are from Xinjiang. The report is [therefore] also the sincerest one," Chen said.

Different from so-called "research reports" that anti-China forces, including Zenz, fabricated without any field investigations, Global Times learned that to pen this report, researchers conducted field studies in five companies (including two mentioned in Zenz's report) and they used research methods including focus group interviews, in-depth interviews, and participatory observations.

A total of 70 ethnic minority migrant workers from Xinjiang, including ethnic groups of Uygur, Kazakh, Kirgiz, and Tajik, were interviewed and the participants were free to choose if they were conducted in their habitual language. Through these methods, the researchers got a deep understanding of the reasons for these ethnic minority groups in Xinjiang choosing to live and work outside the region and the significance of what the working experience means to them and their future plans.

What is certain is that there is no such thing as "re-education," "forced labor" or "surveillance" in any part of the process, the report pointed out.

The in-depth investigations found that it is their own voluntary choice of employment, and their labor rights have been fully guaranteed.

These ethnic minority workers totally enjoy their freedoms of religious belief, the right to use their native spoken and written language and free choice of housing. In addition, in order to take care of their eating habits and respect their religious beliefs, the companies are equipped with chefs from their ethnic groups and provide food options that are halal.

Forty-six percent of those workers want to stay in the companies to increase income; 31 percent of them plan to use their savings to start a business in their hometown, while 23 percent plan to move to Guangdong Province.

"When talking with one of the interviewees, he smiled so brightly that I could feel his eyes shining. He told me that he didn't know the world was so big before, and he cherished the present life very much," Nilufer Gheyret told the Global Times.

As a scholar from Xinjiang, she said she felt the same way. The slander by Western anti-China organizations is actually depriving the rights of the ethnic minorities in Xinjiang to free movement and a better life. Nilufer Gheyret's views are also reflected in the conclusion of the report, which reads, "some countries have imposed sanctions on enterprises employing ethnic minority workers from Xinjiang on the grounds of so-called "forced labor," which is actually undermining the right of ethnic minority groups in Xinjiang to work in the name of human rights."