UPDATE: Returning student from UK suspected of contracting new variant, but wild spread is ruled out 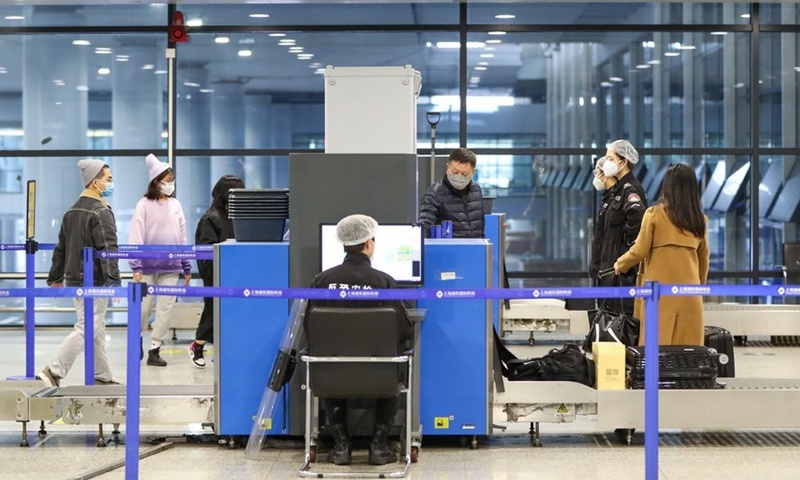 The chief epidemiologist of the Chinese Center for Disease Control and Prevention (CDC) said on Friday that the country needs to increase the efficiency of prevention and control measures to curb imported COVID-19 cases, after a CDC publication reported China has detected its first imported case of the new, more transmissible coronavirus variant that is spreading wildly in the UK.

According to the latest edition of China CDC Weekly published on Wednesday, a 23-year-old female student returning to Shanghai from the UK tested positive for the virus on December 14, and she was transported from isolation to a local hospital in Shanghai.

Shanghai CDC announced Friday that a returning student from the UK is suspected of contracting the more transmissible new variant. Shanghai CDC said the genetic sequencing of the case which was confirmed to have been COVID-19 on December 16, is similar to that of the variant detected in the UK.

An epidemiological investigation revealed that the patient had a negative COVID-19 test result on December 12, two days before her flying back to China, said China CDC Weekly.

According to her statement, she had no exposure to symptomatic individuals and had not purchased or been exposed to frozen food products or raw meat.

But she said she went for a run in a park in the UK without wearing a mask and took off her mask to eat and drink while waiting to board her plane back to Shanghai, said the CDC publication.

The publication said these are all potential situations for her exposure, considering up to 1.86 million confirmed cases of COVID-19 having been reported in the UK as of December 15.

The case sparked rising public concern for a graver threat of the new variant's spreading in China.

He noted China had been on guard against importing the new variant. Such imports require China to increase the efficiency of prevention and control work so as to detect cases and treat them at the earliest time, which will help cut off their spreading chain, Zeng said.

He added that the case can provide a study sample of the new variant for medical staff to better understand the virus.

Trying to calm down the public's concern, Zeng said that the new variant won't have a major impact on China's incoming massive vaccination program as there was "nothing to suggest" that current vaccines would not work against it.

"It is unnecessary to get jittery about the imported new COVID variant," said Wang Guangfa, a respiratory expert at Peking University First Hospital, talking with the Global Times on Friday.

Wang said despite the enhanced infectiousness of the new variant, no significant alternations exist in its pathogenicity, noting that China's current prevention and control measures are sufficient and effective in controlling the disease, no matter the new variant or the old one.

Although there could be more imported cases of the new variant, Yang Zhanqiu, deputy director of the pathogen biology department at Wuhan University, told the Global Times that it is unlikely that a massive outbreak of the new variant would occur, due to China's strict detection and monitoring measures toward inbound passengers and frozen goods.