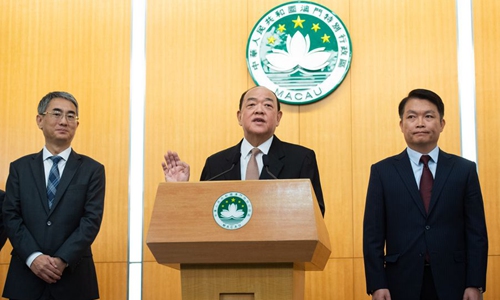 Since its return to the motherland 20 years ago, Macao has made great strides in economic development and achieved prosperity and stability, which should be attributed to the region's comprehensive and accurate understanding and implementation of the "one country, two systems" principle, incoming chief executive of China's Macao Special Administrative Region Ho Iat Seng said.

"I will continue to unite all walks of the Macao society to push forward the 'one country, two systems' so that it goes far and steady to build a more prosperous and beautiful Macao," Ho, who was elected in August and appointed in September as Macao's fifth-term chief executive, told Xinhua in an interview ahead of Macao's 20th anniversary of its return to the motherland on Dec 20.

"The accurate implementation of the 'one country, two systems' has helped Macao maintain its harmony and stability, creating a solid foundation for the rapid economic development and continuous improvement of people's livelihood."

Ho, who served as the president of the Macao SAR's fifth and sixth Legislative Assembly, said that the majority of Macao's Legislative Assembly members are loyal to the country and Macao and when they put forward different views they aim to monitor and cooperate with the SAR government to achieve better administration instead of opposing the government blindly.

Another factor in Macao's success in implementing the "one country, two systems" is that it has sticked to patriotic eduction in schools. Patriotic textbooks have been used in primary up to high school education and all schools hold national flag-hoisting ceremony regularly, which has helped strengthen young people's sense of national pride and national identity, Ho said.

He said he would consider seriously some education experts' proposal to set up a patriotic education base in Macao as cultivating patriotism is a long-run task.

"Facing the future, Macao must maintain its harmonious and stable social environment as well as its patriotic spirit. Otherwise, the society may encounter strong negative shocks."

It is not an easy task to maintain unity considering Macao's diverse social structure and numerous social associations, he acknowledged. However, all sectors of the society have the common goal of building a strong Macao and successfully implementing the "one country, two systems."

"I believe that 'one country, two systems' will continue to go smoothly and successfully and be well received by the people."

Scheduled to be sworn in as the new chief executive on Dec. 20, Ho has vowed to continue pushing forward the moderate diversification of Macao's economy by investing more in scientific and technological research to develop high value-added industries.

The average monthly salary in Macao has reached about 2,400 US dollars, much higher than some developing economies in Southeast Asia. As a result, developing high value-added industries such as traditional Chinese medicine industry, instead of labor intensive industries, should be the right direction in the economic diversification, Ho said.

The SAR government has invested a lot to develop the traditional Chinese medicine in Hengqin. In the future the government will continue to promote the setting up of more enterprises and supporting industries and increase exports to Portuguese-speaking countries and Southeast Asian countries.

Ho stressed the importance to continue developing the industry of gambling in a healthy and proper manner as it is Macao's pillar industry and the most important source of revenue, sustaining the region's medical care, education, elderly care and other social welfare services.

After 20 years' development, Macao has reached a high level in social welfare expenditure. In the future the government should pay more attention to optimizing the resources and spend the money in a more reasonable and efficient manner, he stressed.

INTEGRATING INTO OVERALL DEVELOPMENT OF COUNTRY

In the outline development plan of the Guangdong-Hong Kong-Macao Greater Bay Area (GBA) unveiled earlier this year by the central government, Macao, listed as one of the four core cities in the GBA, should play the role of core engines for regional development. Ho said this arrangement is a great opportunity for Macao and will greatly boost its future development.

Given the tiny land and population, Macao needs to leverage its own advantages and achieve mutual benefit and win-win with other GBA cities, Ho said.

"Macao needs to make the best of its position of 'one center, one platform, one base' and actively integrate itself into the overall development of the country," he said.

As for building Macao into a world center of tourism and leisure, Ho said Macao is actively pushing forward tourism exchanges and cooperation with cities in the GBA and exploring multi-destination tourism.

On setting up a service platform for trade cooperation between China and Portuguese-speaking countries, Ho said Macao's cultural background and legal system are similar with that of some Portuguese-speaking countries and it also enjoys close economic and trade ties with these countries. Macao will take advantage of these ties and help boost China's exchanges and cooperation with these countries.

Ho expressed confidence in building Macao into a cultural exchange and cooperation base with Chinese culture as the mainstream and the coexistence of different cultures. Different cultures have always co-existed harmoniously in Macao and seniors in families can also live peacefully with younger generations although they may have different religious beliefs, he said. "Macao will improve protection and management of its cultural relics and make more contribution to cultural exchanges between China and the West."

Talking about the National People's Congress' decision in October to authorize Macao SAR's jurisdiction to be applied to Hengqin port and adjacent areas, Ho said this move fully demonstrated the central government's strong support for Macao to integrate into the overall development of the country, and will greatly promote the construction of the GBA as well as the infrastructure connectivity, smooth flow of personnel and goods between Macao and the mainland.

"We hope the central government and all departments will continue to provide proper help to Macao SAR for it to maintain prosperity and stability. Macao will also try its best to make greater contribution to the overall development of the country," he said.