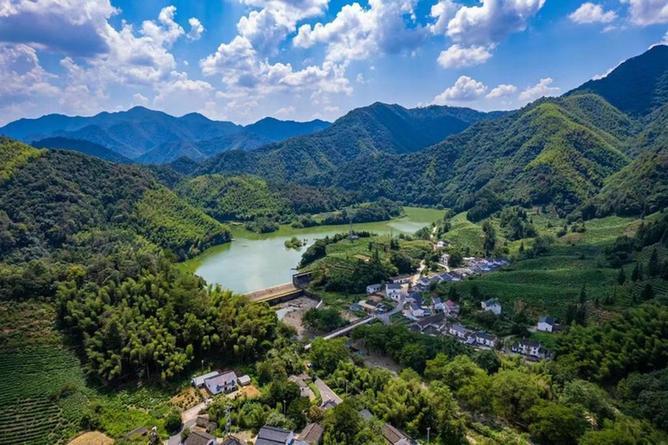 In her spare time, Guo Shanqiuyun likes to stroll around her mountain village with her chubby baby in her arms, chatting with villagers along the way and enjoying the human touch.

Guo and her husband, who both have studied abroad and worked in the southern metropolis of Shenzhen, Guangdong province, chose to settle in Tangjiazhuang village after years of drifting in big cities.

The sleepy village in Huangshan, Anhui province, may not seem especially unique given Anhui's abundance of ancient villages with long histories and rich culture. But to the couple, helping reinject vim and vigor into one of them is both challenging and engaging, a cause to which they can devote themselves.

"Instead of just running a homestay, we wanted to contribute to the wider development of the countryside," said Guo's husband, Zhang Li, an architect who was fed up with what he felt was the lackluster urban scene. The distinctive scenery of Tangjiazhuang is more appealing to him.

In 2015, Guo and Zhang, who boast expertise in marketing and architecture, respectively, invested in building a rural tourism resort that includes a boutique homestay, a camping site, a restaurant and bar. "Rural vitalization doesn't happen simply by investing money. Our philosophy is that we should put people first and work toward win-win cooperation with the villagers," Guo said.

Their idea coincided with villagers' plans for Tangjiazhuang.

"Although our village has plenty of beautiful scenery, it has not welcomed many tourists because of its remote location," said Jiao Guibao, the village's Party secretary, adding that almost all the young people tend to leave to chase their dreams in big cities, leaving the elderly behind. "We have teamed up to turn Tangjiazhuang into a happy rural community. Guo and her husband have created a project that is encouraging youngsters to return," Jiao added.

Li Weifu, a 70-year-old bamboo craftsman, has been witness to the benefits of the changes to the village in recent years. He used to sell his products at local markets, but now, a showroom has been opened in the village to display his handicrafts.

"Many tourists are interested in my weaving skills and buy bamboo products such as home-decorations and ornaments," Li said.

Zhang Yi, a retired dancer, began renting an empty house in the village in 2020. Now, he comes to spend time in the countryside every year. "I enjoy living here. The villagers are warmhearted and often send me pumpkins or wax gourds. They just leave gifts at your door, and you don't even know who they are from," Zhang said.

The arrival of new villagers has opened up more opportunities and greatly broadened local horizons. "I never thought we would ever have bars or bakeries here," Jiao said.

At present, a dozen old houses have been renovated and are being leased to newcomers, with negotiations on more houses currently underway.

Guo has high expectations for the future of Tangjiazhuang. She and her husband plan to introduce educational institutions to the village, with a focus on courses such as nature education.

"Nature is the best teacher. During the winter and summer vacations, parents can bring their children to experience real rural life in Tangjiazhuang without worrying about them falling behind in school," Guo explained.