Medical treatment in Shanghai has not been affected during the ongoing COVID-19 lockdown as patients in critical or complicated conditions have received timely help at medical facilities.

In one example, Xinhua Hospital said it treated an 84-year-old male with a history of liver cirrhosis, who was vomiting blood. The patient initially went to a local hospital but his condition didn't improve. The hospital contacted Dr Xu Leiming of Xinhua's endoscopy department for consultation.

Xu suggested a hospital transfer as the patient's condition was very critical.

After the patient arrived at Xinhua, doctors conducted gastroscopy immediately and detected the bleeding point at the conjunction of the esophagus and stomach and stopped the bleeding at once.

Xu said that the current temperature swings between winter and spring are likely to cause the condition of people with underlying diseases, like the patient, to become more serious. The hospital has received four patients with digestive system bleeding during the ongoing extended Puxi lockdown. 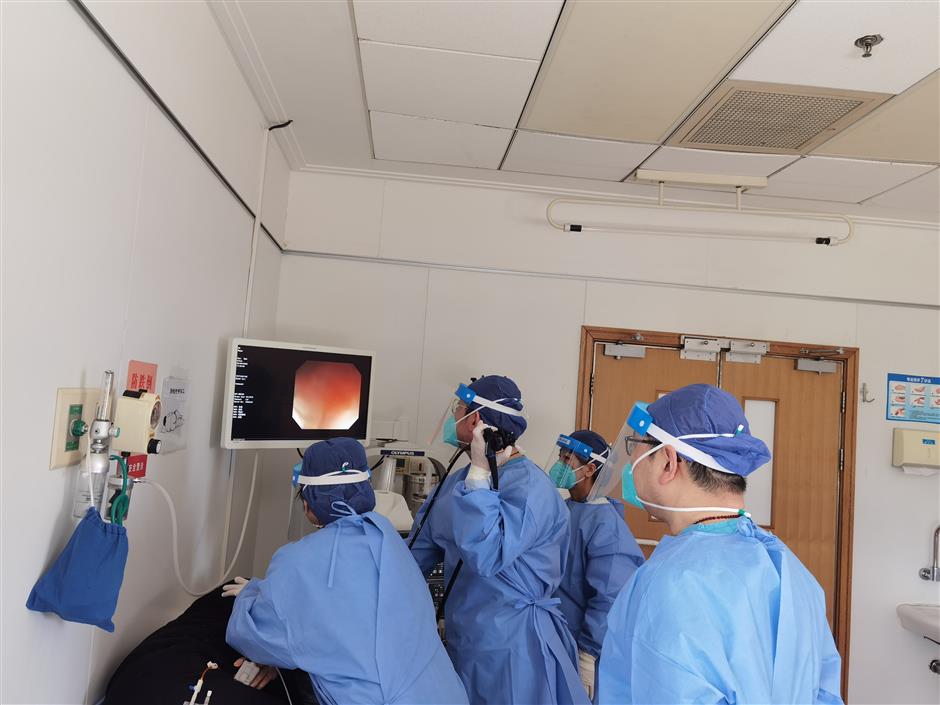 Doctors from Xinhua Hospital conducted an emergency gastroscopy on the patient vomiting blood.

The hospital also announced the success of a surgery on a patient's kidney tumor which was growing into her heart.

The 42-year-old woman was diagnosed with a tumor in the right kidney years ago. Since the CT scan revealed it to be a benign tumor, she didn't pay it much heed.

However, she started to feel pain on the right waist in recent months and checks found the tumor had grown along the vein into the chest. It was a very risky condition.

She came all the way from neighboring Anhui Province to Shanghai's Xinhua Hospital for treatment.

About 4 to 10 percent of kidney tumor patients can have such condition, but less than 5 percent have growth into the chest, doctors said.

Doctors conducted a four-hour surgery to remove the entire tumor.

Meanwhile, on Monday night, medics of the Obstetrics and Gynecology Hospital of Fudan University received a woman with pregnancy into the 36th week. It was a very special case and involved many risks like a premature baby and two wombs, a type of congenital deformity. In addition, the not-so-young patient was overweight and suffered from hypertension.

Considering the tricky situation and for the safety of the baby, doctors decided to carry out surgery immediately.

A 2,400-gram girl was delivered from the left womb and both the baby and the mother are in stable condition, the hospital said on Wednesday. 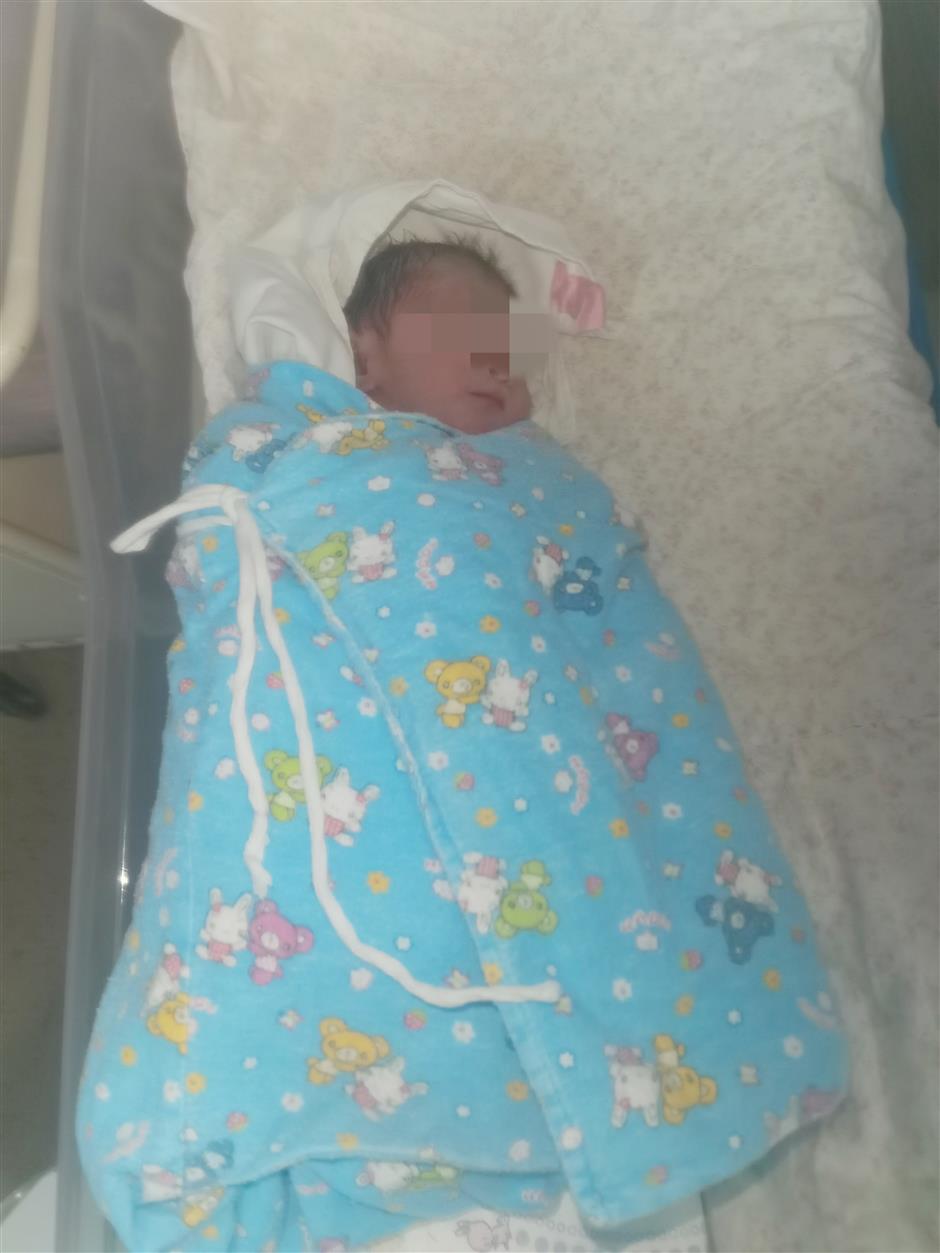 The baby girl born to a woman following a surgery that was risky for many reasons.

In fact, the resurgence of the COVID-19 pandemic and the subsequent lockdown have also not affected local medical experts' innovative practice.

Renji Hospital, for instance, announced the success of a tubeless thoracoscopic surgery, which means the patient breathed by herself during the operation instead of tracheal intubation.

It was the first such surgery at the hospital and also a rare operation in the nation.

The 45-year-old woman with tracheal cancer came to Dr Zhao Xiaojing of Renji from her hometown in southeastern Fujian Province.

Zhao said the traditional open-chest surgery is safer but requires a long recovery period and causes much pain.

Since the patient was also a doctor, she expressed a strong desire to have a quicker recovery and return to work. Zhao decided to make use of the tubeless technology for the first time.

"It is a challenging surgery, which requires the cooperation of different departments. We had a detailed discussion before the operation," Zhao revealed.

The two-hour surgery on Tuesday afternoon was successful through the cooperation of surgeons and anesthetists and it only left a three-centimeter cut, which will ensure quicker recovery for the the patient, with less pain. 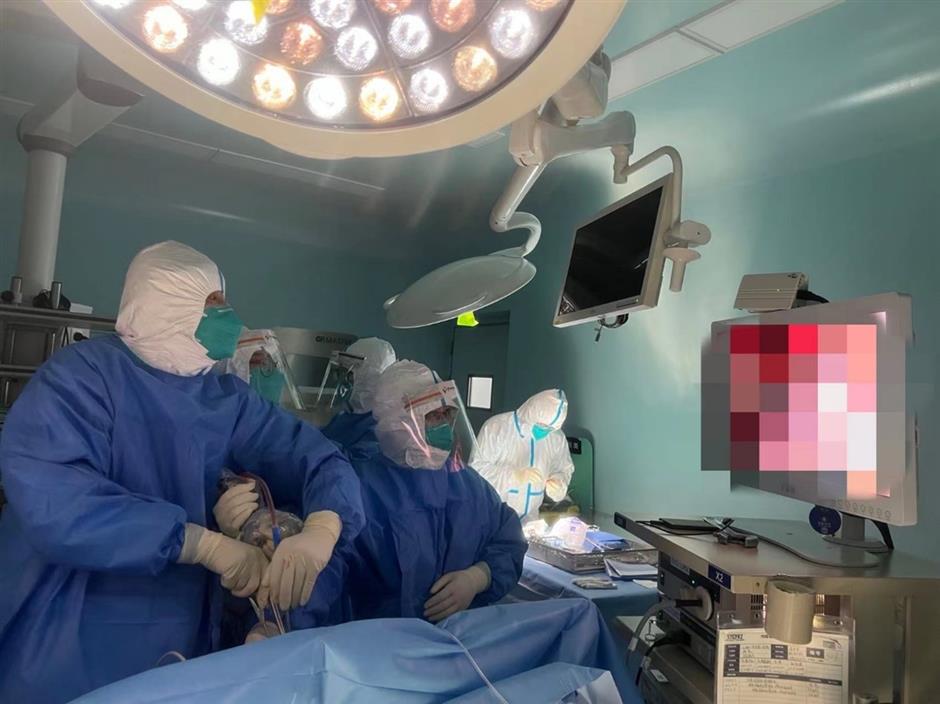