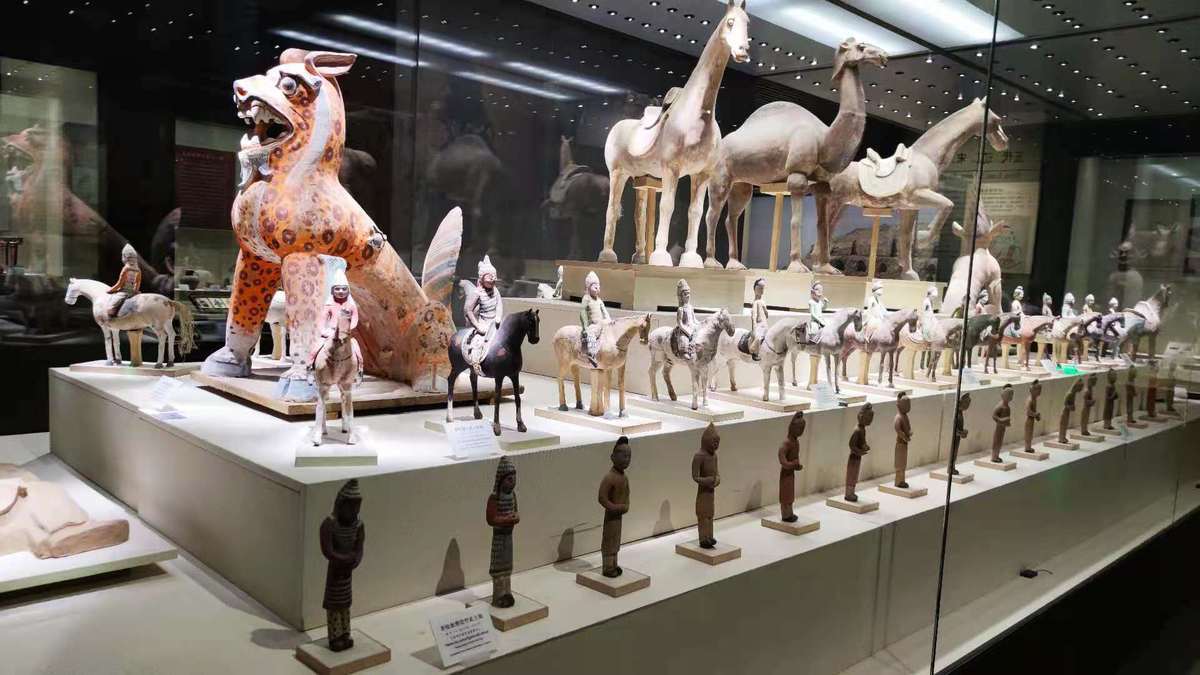 Some of the ancient sculptures displayed at the historical relics gallery of Xinjiang Museum, Urumqi.(Photo: agencies)

Museums are a great place to take a look at a region's past and make sense of the present. The Xinjiang Uygur autonomous region museum in Urumqi showcases the history of China's far west, which has been the hub of the ancient Silk Road, and a melting pot of cultures and religions for millennia.

"Since ancient times, Xinjiang has been a place where many ethnic groups have lived together, where many cultures and religions have coexisted," noted Curator Yu Zhiyong in an exclusive interview with CGTN Digital.

"Here, we not only display the history and culture from ancient times to modern times, but also exhibit some intangible cultural heritage that embodies the spiritual and cultural aspects of multi-ethnic social life, folk customs, and cultural relics," he added.

Xinjiang Museum was inaugurated in 2005. Owing to its phenomenal collection of artifacts of cultural and historical importance, the museum was listed among China's first "national first-grade museums" in 2008.

"Xinjiang Museum has the largest area and the richest collection in Xinjiang. At present, our museum has a collection of more than 28,000 pieces of historical artifacts," Yu explained, adding that every year the museum attracts over a million visitors from across the country and other parts of the world.

"The total floor area is 17,000 square meters. At present, our exhibitions feature Xinjiang's relics, ancient ethnic customs, mummies and cultural relics, and clothing. These are the four permanent exhibitions," he said.

An entire section illustrates the cultures of various local ethnic groups. Seen in totality, these relics also provide a glimpse into how the Ancient Silk Road contributed to the diversity of culture in the region.

"Through the Silk Road, cultures from China's inland regions have had exchanges and even blended with those from Central and West Asia. For example, we found many epitaphs in Turpan and also unearthed a large number of coins and textiles. It can empirically and clearly explain the cultural exchanges of people during that period, which is a microcosm of it," said Yu, who is also an archaeologist.

"For example, the epitaphs unearthed in Turpan has an epitaph with the name Kang. Well, some people surnamed Kang (Khan) may have come from what is now Uzbekistan. They might be the ancient Sogdian people of Samarkand in Uzbekistan," he elaborated.

Yu said that in the ancient tombs of Turpan, archaeologists have also discovered names of many ethnic minorities from China's inland regions pointing to a long history of ethnic fusion in the region. The ethnic diversity that we see in Xinjiang today is a result of civilizational churning and cultural exchanges over the years.

"In the Xinjiang Uygur autonomous region, many ethnic minorities such as Uygur, Han, Kazakh, Kyrgyz, Uzbek, and others live in the river valley oases, in the north and south of the Tianshan Mountains, over the years, especially this beautiful homeland built by all ethnic groups in the past 70 years. We are now able to live in this land in harmony and unity. This is the common sentiment of our various ethnic groups towards this land," he remarked.

The curator informed that the museum is undergoing a second phase of expansion, which will increase the exhibition area to 32,000 square meters. The expansion work is expected to complete by October this year.

"On completion of the second phase, we will resume our four permanent exhibitions and add two special exhibitions, reaching a total of six. In the next two-three years, we intend to have a total of 10 exhibitions," Yu said, adding that the museum intends to attract up to two million visitors in the coming years.

"We will include separate sections on ancient documents and carpets discovered in Xinjiang. We will also introduce some special exhibitions from other provinces such as Henan, Shaanxi, and Shandong, etc.," he elucidated.

"For some special exhibitions, we will also introduce some foreign exhibitions, such as some exhibitions of cultural relics from some friendly countries in Central Asia, and so on," he added.

The historical treasures exhibited in Xinjiang Museum, in many ways, are key to understanding the multi-cultural, multi-ethnic essence of Xinjiang that it has inherited and preserved through the ages.