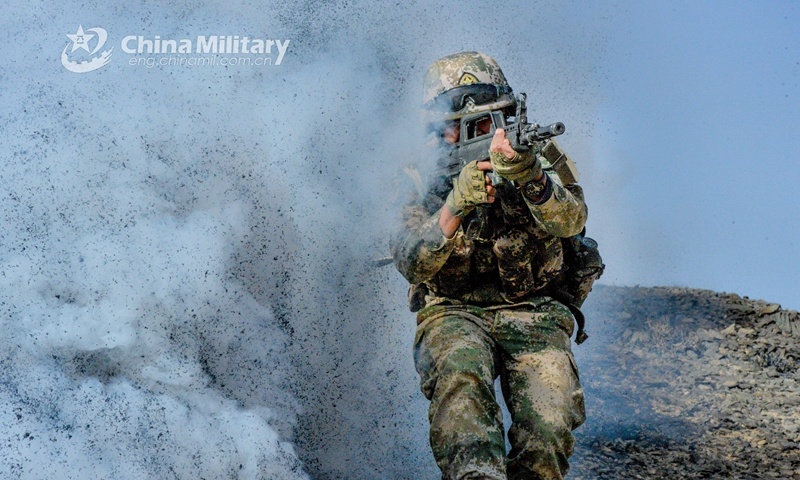 A soldier assigned to a combined arms brigade under the PLA 76th Group Army uses smoke bombs to create a smokescreen for concealment as he engages mock enemy with his rifle during a real-combat drill on September 26, 2020, which aims to beef up soldiers' courage and uprightness in battlefield. (eng.chinamil.com.cn/Photo by Zhang Yongqiang)

The US remains persistent in pushing forward the sales of several types of attack weapons to the island of Taiwan, which experts say shows the US strategic ambiguity on Taiwan is fading, and its policy is gradually leaning toward Taiwan secession.

Taiwan authority has played down the US arms deals, calling them media speculation, a move that showed that Taiwan secessionists have been deterred by the recent PLA drills, and reluctant to pay unreasonable, forced protection money to the US in the form of arms sales, Chinese mainland analysts said on Tuesday.

The White House has sent a notification for approval to the US Congress over the sales for a High Mobility Artillery Rocket System (HIMARS) truck-based rocket launcher, SLAM-ER long-range air-to-ground missiles, and external sensor pods for F-16 jets that allow the real-time transmission of imagery and data from the aircraft to ground stations, Reuters reported on Tuesday, citing five sources familiar with the situation.

Taiwan authorities said they have not been notified by the US, and cannot confirm the deal, Taipei-based newspaper the Liberty News reported on Tuesday.

In response, Chinese Foreign Ministry spokesperson Zhao Lijian said at a regular press conference on Tuesday that China resolutely opposes the US plan to sell three types of weapons to the island of Taiwan, and will respond based on the situation.

Song Zhongping, a Chinese mainland military expert and TV commentator, told the Global Times on Tuesday that the weapons are offensive in nature, and would seriously violate the August 17 Joint Communiqué.

This is a provocative move to the current status in the Taiwan Straits, but will not change the power imbalance between the Chinese mainland and the island of Taiwan, as the mainland holds absolute superiority, Song said.

Prior to the alleged US Congress notification, Reuters reported last month that the US is planning to sell seven major weapons systems to the island. In addition to the three in the recent notification, aerial drones, anti-ship missiles and underwater mines were also included. Reuters reported on Tuesday that they were also expected to reach Congress for approval soon.

In response to the Reuters report, Taiwan's defense authority said it was "merely speculation by local media."

Taiwan authorities did not react to US arms sales like in the past, and this showed that the US is forcing the arms sales to Taiwan, to pay protection money, Chinese mainland observers said.

In May, the US approved the sale of 18 MK-48 Mod6 Advanced Technology Heavy Weight Torpedoes and related equipment for an estimated $180 million to the island of Taiwan; in July, the US announced a deal for the recertification of its Patriot Advanced Capability-3 (PAC-3) air defense missiles, at an estimated cost of $620 million. The US also finalized a deal for 66 F-16V fighter jets to Taiwan at $8 billion in August. This means Taiwan has paid $8.8 billion to the US this year.

Song said that Taiwan authority is left with no choice but to pay protection money to the US, and as the PLA is demonstrating its vast military capabilities with recent military exercises, Taiwan secessionists are acknowledging that no matter what kind of weapons they buy from the US, they cannot face up to the PLA.

The PLA has been conducting aerial and naval exercises and patrols in the Taiwan Straits since mid-September, and recently conducted a large-scale amphibious landing exercise off the mainland's southeastern coast near Taiwan. Starting Tuesday, it is also holding live-fire maritime drills off the coast of Zhangzhou, East China's Fujian Province, which Taiwan media said is less than 100 kilometers from Kinmen.

Li Haidong, a professor at the Institute of International Relations of the China Foreign Affairs University, told the Global Times on Tuesday that the arms sales indicate the US is making its one-China policy more clear, and leaning toward supporting Taiwan secession, which is very dangerous.

The US used to applied ambiguity to its one-China policy, Li said.

To counter the US provocation, the PLA should continue to boost its power, maintain powerful deterrence on the Taiwan question, and strike resolutely and fast when the US or the Taiwan authority does something to harm China's sovereignty, Li said.

Song said that the arms sales are also likely part of US President Donald Trump's re-election campaign to win support from US arms dealers and more votes.

Beijing-based military expert Li Jie said that the US will not sacrifice its interests in a direct clash with the PLA, as it only wants to sell outdated weapons to Taiwan at a high price.