CHINA US attempt to reverse history doomed to failure: spokesperson

US attempt to reverse history doomed to failure: spokesperson 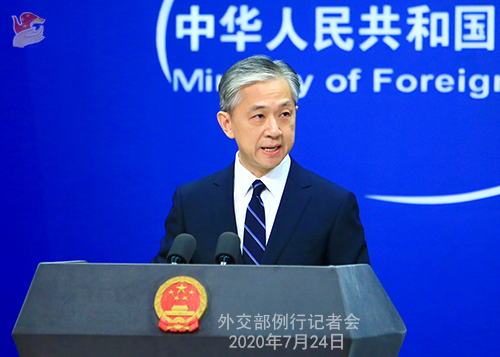 BEIJING, July 24 (Xinhua) -- Any attempt to reverse the historical trend against the Chinese and American people's aspiration for greater exchange and cooperation will never succeed, a Foreign Ministry spokesperson said Friday.

Spokesperson Wang Wenbin made remarks when responding to a query about a speech by U.S. Secretary of State Mike Pompeo saying that the United States should abandon its past policy of blindly engaging with China.

In his speech, Pompeo maliciously attacked the Communist Party of China and China's social system, and wantonly criticized China's domestic and foreign policies. His baseless, fact-distorting speech is full of ideological prejudice and a Cold-War mindset, a hodgepodge of China-related political lies recently fabricated by senior U.S. politicians, said Wang at a press briefing.

"China expresses indignation and firm opposition to it," said Wang. "We have lodged solemn representations with the U.S. side."

For some time, in order to deflect attention with slanders against and oppression of China and score some political gains, several U.S. politicians have been drumming up ideological rivalry, blabbering about changing China, rejecting China-U.S. relations and driving a wedge between China and other countries, said the spokesperson.

"Their petty tricks will not fool the American people and the international community," he said.

China noticed that Pompeo chose the Richard Nixon Presidential Library as the venue to deliver his speech. President Richard Nixon started the process of normalizing China-U.S. relations and made contributions to the development of bilateral relationship.

"But for those U.S. politicians who fabricate China-related lies and spread anti-China fallacies, we believe that history is just and any attempt to reverse history will not succeed if it goes against the wishes of the Chinese and American people to strengthen exchanges and cooperation," the spokesperson said.

China's foreign policy on the United States is consistent and clear, said Wang. "We are committed to developing a China-U.S. relationship featuring non-conflict, non-confrontation, mutual respect and win-win cooperation. In the meantime, we firmly uphold our sovereignty, security and development interests."

"We urge the United States to reject its Cold War mindset and ideological bias, view China and China-U.S. relations in a fair manner, refrain from those negative words and deeds, and create conditions for bringing the bilateral relationship back on track," Wang said.