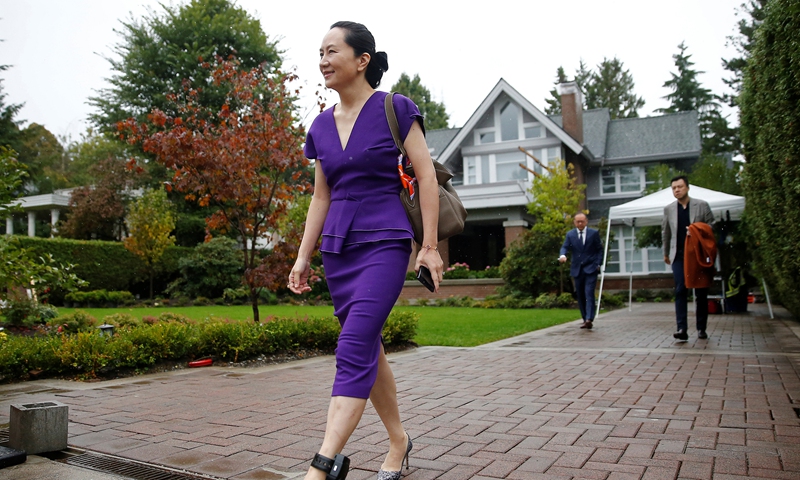 There's sufficient evidence that the US and Canada are abusing their bilateral extradition treaty in Huawei Chief Financial Officer Meng Wanzhou's case, and they are severely violating a Chinese resident's legitimate rights and interests by randomly imposing enforcement measures on her, Chinese Foreign Ministry spokesperson Zhao Lijian said Monday.

"It's a serious political event," Zhao said at a regular press briefing.

"The US' purpose is to crack down on Huawei and Chinese high-tech companies, while Canada is  an accomplice of the US in the case," he said, noting that not only in China but also those who are insightful in the international community share the view.

Starting on Monday (Canadian time), Meng is scheduled to take part in hearings via telephone. She is expected to ask the Canadian court to release more confidential documents relating to her arrest at the Vancouver Airport, to show that her rights were abused.

Detailed documents obtained by the Global Times previously suggest that the arrest of Meng was a politically driven trap jointly colluded by the US Federal Bureau of Investigation (FBI), the Royal Canadian Mounted Police (RCMP) and Canada Border Services Agency (CBSA) that included abuse of law enforcement procedures and violations of the law for US political purposes: The border agency abused its inspection powers to conduct an illegal covert criminal investigation.

Zhao stressed that the Chinese central government's determination to protect the legitimate rights and interests of its residents and companies is firm and unshakable.

"We also support relevant companies and individuals to uphold their own rights and interests by referring to the laws," he said, urging Canada to earnestly respond to the Chinese side's solemn position and concerns, immediately free Meng and let her return to China safely.

The remarks also come as the lawyers team for Meng say evidence used by the US for Meng's extradition is unreliable and defective and should not be considered by a Canadian court, according to local media reports.

Meng's lawyers provided key evidence that the US intentionally left out key facts about its communication with HSBC about Huawei's operations in Iran, when requesting Meng's extradition from Canada to stand trial on alleged frauds.