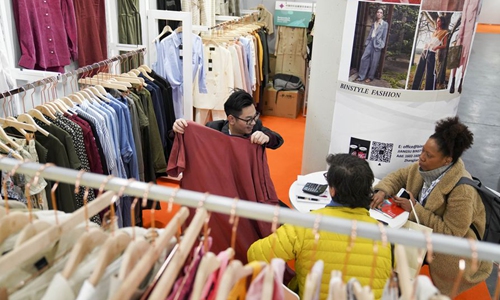 A staff member of a compay from China's Jiangsu Province (L) introduces products to buyers during the 21th China Textile and Apparel Trade Show in New York City on January 21, 2020. (Photo: Xinhua)

US-China ties are essential to the international political structure, and the countries' bilateral cooperation could help solve global problems, a US expert on China issues has said.

The United States and China have the most important bilateral relationship in the world, not just because of the size of their respective economies, but also due to the way their relations influence international politics, said William Jones, Washington bureau chief of the US publication Executive Intelligence Review, in an exclusive interview with Xinhua.

When Washington and Beijing come together, their collaborative relationship sets an example of how difficult problems facing the world can be more easily resolved, Jones noted.

Referring to the recently inked China-US phase-one trade deal, Jones said it has injected a positive momentum into the countries' ties. "There is now a definite reduction in the previous tense atmosphere that has prevailed," the expert observed.

"If both parties can also find other areas of cooperation, in culture, science-technology, medicine, space, the environment, infrastructure and the like, we can start to transform this relationship from a less competitive to a more cooperative one," the long-time China-watcher said.

Jones added that having worked closely for the last three decades alongside Chinese scholars and friends, he is amazed by the progress China has made, the energy of its people and the total commitment of the Chinese government to improve the wellbeing of China's population.

The expert pointed out that the China-proposed Belt and Road Initiative has sparked a new sense of development in many countries.

"China's own self-development from a very poor country to a moderately prosperous one has set an example for all impoverished nations," said Jones.

China has also proactively used its newfound prosperity to help other nations achieve their own prosperity by providing them means of connectivity in transportation and communications, bringing them into the mainstream of world commerce, he added.

"China's commitment to move from a world of winner-takes-all to a world of shared interest has pointed mankind in a new and exciting direction, which has gained much traction globally," Jones said.

Appreciating the effective measures taken by China to reduce poverty, Jones said that the Chinese government stays continually focused on the living conditions of its people -- in particular, those at the bottom of the wage scale.

"The poverty alleviation campaign should become a paradigm for resolving the poverty problem worldwide," said the scholar, adding that it should cast a shadow of shame on those countries not willing to tackle their own poverty issues.

"Prosperity never 'trickles down,' but has to be created consciously by the commitment of government first and foremost, which can energize the economic forces of the nation toward that goal," Jones said.