BOSTON, the United States, April 14 (Xinhua) -- At a forum concluded here Sunday, multiple U.S. and Chinese business leaders expressed optimism about the Chinese economy and said opportunities are abundant in the Chinese market. 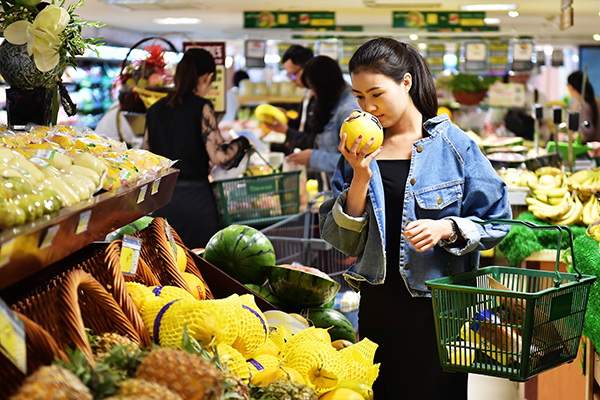 A citizen selects melon at a supermarket in Shijiazhuang, capital of North China's Hebei province, May 9, 2016. (File Photo: Xinhua)

"I think the opportunities in China are going to continue to be outstanding," Pete Walker, former senior partner with consulting firm McKinsey & Company, told a panel at the Harvard China Forum (HCF).

The sentiment was shared by Larry Culp, chief executive of General Electrics, who said of international companies at the forum's closing ceremony that "you know if you are active globally, you need to be in China."

Urbanization, innovation and the unique features of the Chinese economy all feed into the potential for future growth, according to the speakers.

"Urbanization has been an enormous lift to the economy in China," Walker said, citing statistics indicating that a person's productivity increases five or six times when the person moves from rural areas to urban ones.

"There's still a lot of lift to be had from urbanization," Walker said as he pointed to the gap between the urbanization rate of China and mature economies such as Japan and Germany.

The emphasis on innovation in China was also noted by the speakers. Andrew Yan, a veteran venture investor, pointed out that in the past five years, China churned out unicorn companies faster than any other country in the world, in part thanks to China's innovative tech industry.

"Even though the West likes to think China is not innovative, they are innovative in a different way, much more market-driven, more application-driven," Walker said.

"I think the scale of that innovation is even bigger than the monolithic breakthroughs," he said.

Han Weiwen, managing partner of consulting firm Bain & Company's Greater China offices, told Xinhua on the sidelines of the forum that innovation has pushed China's retail industry to be world-leading.

"In terms of its ecosystem, technology and business model, China's retail industry is absolutely in the forefront among other countries," he said.

Han said the Chinese economy enjoys a unique set of features that paved the foundation for a thriving retail industry in the Internet age, including a relatively young demographic that is eager to embrace a new lifestyle, high smartphone penetration that makes e-commerce more accessible, high population density and low logistics costs that enable affordable shipping costs for online purchases.

Yan, the investor, said that in the age of mobile Internet, countries with a larger population will have an advantage over countries with smaller populations. Young Chinese companies such as the e-commerce platform Pinduoduo and the car-hailing company Didi are all beneficiaries, he said.

Han cautioned that not all factors play into retailers' favor, some also pose challenges.

The yearly large-scale migration of migrant workers from urban centers to rural regions to celebrate the Chinese New Year is one such challenge, Han said.

"This phenomenon greatly impacts the retail industry, as it poses a two-fold challenge, how can retailers provide good service to the customers in urban centers during normal times, and whether the retailers have the necessary network to extend its services to rural areas when the migrant workers return home for the spring festival," Han said.