CHINA US coercing other countries to join 'Clean Network' is dirty business: FM

US coercing other countries to join 'Clean Network' is dirty business: FM 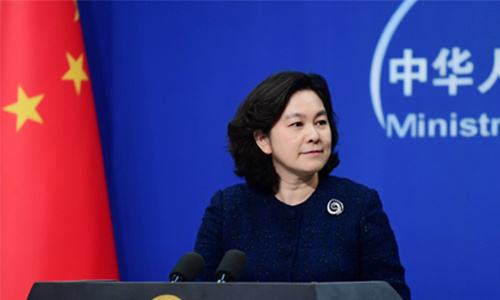 Officials from the Trump administration have lobbied all around the world, coercing or luring other countries to shun Chinese high-tech firm Huawei's 5G, and to join US' so-called "Clean Network" scheme, which is actually very dirty, said China's Foreign Ministry on Thursday.

Through baseless accusing and maliciously smearing Huawei and other Chinese companies, the US government aspires to preserve America's dominance in the high-tech sector, Hua Chunying, spokesperson of the Foreign Ministry, said.

The remarks come after US Secretary of State Mike Pompeo asserted on Wednesday that more than 60 countries have forsworn China's 5G technology, including 27 out of 29 EU countries. Pompeo also said that some 130 telephone companies in the world have forsworn Huawei's 5G wireless networks.

"I would like to ask US Secretary of State Mike Pompeo to list the more than 60 countries, including the 27 member states of the EU, and the telecommunications companies he claimed that have abandoned China's 5G technology, and see whether he can list them," Hua Chunying said.

"According to my knowledge, the US has lobbied all around the world, coercing or luring other countries to join its so-called 'network.' Some countries were forced to join it," Hua said.

Hua said that facts have proved that Chinese companies maintain a good network security record in the world. For example, in the past 30 years, Huawei has built more than 1,500 networks in more than 170 countries and regions, and provided services to 228 Fortune 500 giant companies, serving a user base of more than 3 billion on this planet.

There has not been any case similar to the network security incident involving Edward Snowden, nor has any country found any evidence proving the existence of backdoors in Huawei's telecom equipment, said Hua.

Everyone can see clearly that the so-called "Clean Network" that was concocted by the Trump administration is very dirty in nature. Its true purpose is to suppress non-US companies that have achieved ground-breaking technology advantages, suppress the legitimate development rights of other countries, and safeguard the US' monopolistic self-interest and tech hegemony, Hua said.

"Bullying other countries is unpopular, and there is no market whatever for coercion. We believe that most countries in the world will recognize the truth, uphold an objective and fair stance, and make their independent judgment," Hua said.