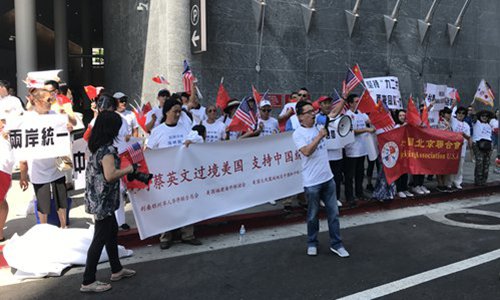 The National Defense Authorization Act (NDAA) showcases blatant US interference in the upcoming election on the island of Taiwan, Chinese experts said on Wednesday, and warned the Democratic Progressive Party (DPP) that pulling closer to the US would backfire.

The act that passed the US Senate on Tuesday stipulates that the US Director of National Intelligence should submit a report on the influence exerted by the Chinese mainland on elections in Taiwan no later than 45 days after the election date to congressional intelligence committees.

The act also included sections about improving the predictability of arms sales to Taiwan, strengthening security support for the island, and the feasibility and plans for engaging with Taiwan in cybersecurity activities.

Chinese analysts on Wednesday slammed the act, saying it showed the US stepping up interference in the election and was clear evidence of the US using the DPP as a chess piece to meddle in Taiwan affairs.

The experts said that the new act by strengthening cybersecurity cooperation upgrades US interference in the island of Taiwan and so threatens Taiwan security.

The US has been increasingly provocative about Taiwan with arms sales and domestic legislation to encourage and mobilize secessionist forces in the island, Li Haidong, a professor at the China Foreign Affairs University's Institute of International Relations in Beijing, told the Global Times on Wednesday.

"Presuming mainland influence in elections to justify its own interference is an old US trick of the thief crying 'Stop thief!'" said Li.

Analysts said the mainland's policies toward the island of Taiwan are clear and consistent and Beijing did not interfere in the region's election as the Chinese government has its own pace of reunification.

A military expert who required anonymity said that Beijing was always prepared for the worst.

"If the US and Taiwan secessionist forces make any unwise decision to cross the red line, we are capable of dealing with the situation," he said.

Some internet users on the island of Taiwan condemned the DPP for acting as a US pawn for containment of the Chinese mainland.

The act is expected to be signed by US President Donald Trump before becoming a law.

In October, the US passed the Taiwan Allies International Protection and Enhancement Initiative (TAIPEI) Act in the wake of an international trend of severing "diplomatic ties" with the island.

Ma Xiaoguang, an official with the Taiwan Affairs Office of the State Council in Beijing, warned then that the DPP administration was playing along with the US "Taiwan card," which would only undermine the interests of compatriots on both sides, "especially those from Taiwan."

The mainland has its own strategy of increasing economic and overall strength to attract Taiwan compatriots, Li said, and any interference by secessionist or foreign forces will only backfire on them.