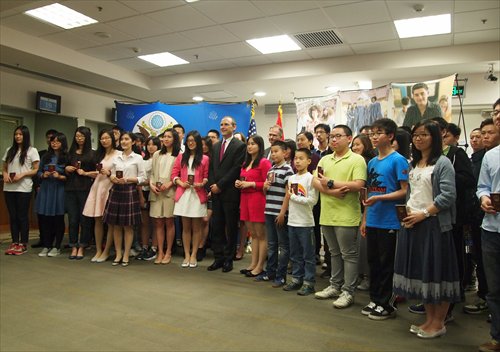 Chinese students who have received a US visa pose with Hanscom Smith, US Consul General in Shanghai. (Photo: IC)

Chinese internet users have slammed the newly adopted US visa policy that requests nearly all applicants to submit their social media usernames, saying the policy violates US advocacy and standards of freedom of speech and personal privacy. China's Embassy in the US on Sunday released a statement on its official website, confirming the policy and reminding Chinese nationals to fill out the application forms truly.The Embassy also said that "a valid US visa does not guarantee the entry to the country, and the US border enforcement agents have the final say… It is common to see some people were denied the entry with a US visa…" The border authorities would ask for double screening if they doubt the purpose of entry or the documents the entrant holds, said the announcement.On the official website of the Consular Electronic Application Center of the US Department of State, it says that nonimmigrant visa applicants who plan to go to the US for travel, study or business must select social media platforms they have used within the last five years but need not provide their passwords. The 20 optional platforms include Twitter, Facebook, YouTube, Sina Weibo, Qzone (QQ), Tencent Weibo, Douban and Youku.The only exemptions were certain diplomatic and official visa applicants, CBS News reported on Saturday. The US State Department estimates the move will affect 710,000 immigrant visa applicants and 14 million nonimmigrant visa applicants each year, the report said.First proposed in March 2018, the new visa policy comes into effect amid the trade war, prompting worries that visas might be rejected if internet users have posted something unfriendly about the US on social media."I don't want to submit to that. I feel the move would put me under surveillance," a Peking University student, scheduled to start exchange study in Hawaii in August, told the Global Times. She asked not to be fully named.Some platforms are not open to all but to close friends, she noted, which involves users' privacy.US State Department officials replied to The Hill on Saturday that social media could become a major gathering place for the dissemination of terrorist views and activities and the move aimed at screening out terrorists and preventing them from entering the US.Li Haidong, a professor at the China Foreign Affairs University's Institute of International Relations, disagreed.  "The US has violated foreign citizens' right to privacy in the name of cracking down on terrorism," Li told the Global Times on Sunday.The move goes against the global trend and American openness and inclusiveness, Li asserted. "The US becomes hostile to China and other countries around the world and even sets itself obstacles like new visa regulations which could isolate it," said Li.