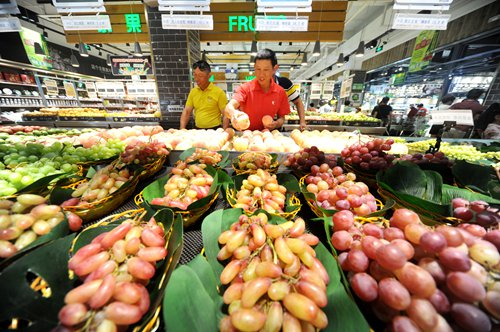 Tariffs imposed on fresh fruit from the US have challenged the business of that country's growers and exporters, while China's consumers have not been affected because of the small market share of US fruit and a rising number of foreign alternatives, said industry analysts.

Imports of US fruit including cherries and apples have slumped recently due to wholesale price hikes caused by tariffs, two Chinese fruit importers told the Global Times.

A manager surnamed Wu at Guangzhou Yogo Import and Export Co based in South China's Guangdong Province said that her clients' demand for US cherries, a summer fruit, has obviously declined in recent months mainly because the price has risen by two-thirds.

"The number of containers carrying US cherries has seriously declined," Wu told the Global Times Thursday.

Likewise, Beijing Taihe Chuangye International Trade Co, a major fruit trader in Beijing, stopped importing US cherries after tariffs on them were imposed in China.

Zhao Xinwen, general manager of the Beijing-based fruit trader, told the Global Times Thursday that this summer, his company shifted to buying Canada-grown cherries instead of US ones.

As for another variety of US fruit, the Red Delicious apple, Zhao said there have been no imports this year. Although this is not the fruit's natural season, which usually comes in September and October, it is usually sold year-round in China thanks to refrigeration technology.

"In previous years, a crate of Red Delicious apples weighing about 19 kilograms was sold at less than 400 yuan [$58.6], sometimes less than 300 yuan at the cheapest point. But the current price has soared to 600 yuan in Beijing," Zhao said.

Liu Tong, a veteran statistics analyst at Xinfadi, the capital's largest produce market, told the Global Times in a recent interview that apples imported from the US make up about 2 percent to 3 percent of China's market for the fruit. The majority is held by domestically grown apples.

"Consumers who have a curiosity about foreign things might choose Red Delicious, but they tend to be less price-sensitive," said Liu, adding that this is a small group of shoppers. Most buyers of apples in China won't be affected by the price hike.

The US state of Washington accounts for more than 90 percent of all US apple exports and China is the  sixth largest export market for the state's apples, according to an emailed reply the Washington Apple Commission sent to the Global Times on Tuesday.

The commission said that while the impact of the tariff on current crop is difficult to measure because of a typically slow season for exports to China, US grower are watching the situation closely.

"As producers look forward to the 2018 crop, they will be reviewing their strategy and individual sales groups will be evaluating the best plan to provide product to consumers in China. This is a developing situation and we are following closely to best prepare for the upcoming year," the commission said.

It noted that while China is a growing market with a preference for high-quality apples, it has imposed total duties of 50 percent on US apples, pears and cherries, following two rounds of  tariffs on US goods, including fresh fruit, imposed by China in response to US tariffs on its goods.

In retaliation for US tariffs on $50 billion worth of Chinese goods, China imposed on April 2 a 15-percent tariff on 128 US items including fresh and dried fruit and nuts, effective the same day.

In response to US 25-percent tariffs on $50 billion worth of Chinese goods in early July, China's Ministry of Commerce immediately hit back with tariffs of equal value on some US goods, including fruit.

Actually, not all the increased costs can be attributed to tariffs. US imported fruits are staying for longer periods at Chinese ports, which has greatly increased their logistics costs, according to a report on industry website guojiguoshu.com in June.

Since the start of May, Chinese customs has strengthened checks on US fresh fruit, with spot checking ratios rising to 100 percent from 30 percent previously, and quite a few batches were returned to the US after being rejected, said the report.

Ma Wenfeng, a senior analyst at Beijing Orient Agribusiness Consultancy, told the Global Times Thursday that in addition to the high costs, alternatives from other countries such as Southeast Asia are also challenging US fresh fruit's competitiveness in the Chinese market.