CHINA US has notorious records on arbitrary detention: Chinese envoy

US has notorious records on arbitrary detention: Chinese envoy 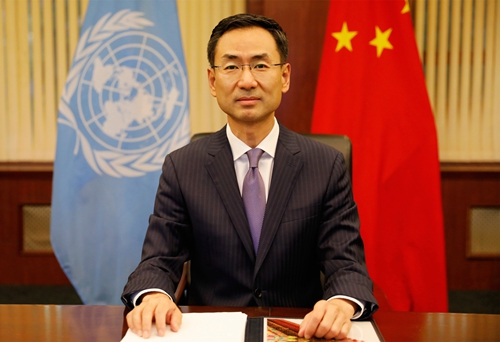 Arbitrary detention violates human rights and the rule of law, and most arbitrary detention cases against foreign citizens involve the abusive use of unilateral sanctions and "long-arm jurisdiction," Geng said in a video address to a UN conference.

Using arbitrary detention as a tool to put pressure on other countries violates the basic principles of international law and basic norms of international relations, such as sovereign equality and non-interference in internal affairs, he told the 31st Legal Advisers Meeting at Law Week 2021.

"When discussing arbitrary detention, we cannot ignore the United States' notorious records in this regard," he noted.

Over the years, the United States has been detaining a large number of suspects in the notorious Guantanamo prison. Some suspects have been detained indefinitely without due process of law, and have been constantly subjected to torture and ill-treatment. The United States has also arbitrarily imprisoned innocent immigrants and forcibly separated children from their parents, breaking up countless families, he said.

The Meng Wanzhou incident, concocted by the United States, is a typical case of arbitrary detention, Geng said.

It has long been fully proven that the so-called fraud charges against Meng are purely fabricated. Even HSBC, the so-called victim portrayed by the U.S. side, has disclosed materials that are sufficient to prove Meng's innocence, he said.

This incident is the result of unilateral sanctions and "long-arm jurisdiction" by the United States. It is an incident of political persecution against a Chinese citizen, which seriously violated the rules and principles of international law on respect for human rights, the legitimate exercise of national jurisdiction, non-interference in internal affairs, and mutual respect for sovereignty, he added.

The incident is designed to hobble China's high-tech enterprises and impede China's development. It is a blatant act of unilateral bullying, the Chinese envoy said.

Canada has also played a very dishonorable role in this incident. Instead of politicizing arbitrary detention issues under the pretext of discussing legal issues, the Canadian side should do some serious soul-searching and draw lessons from this incident, he said.