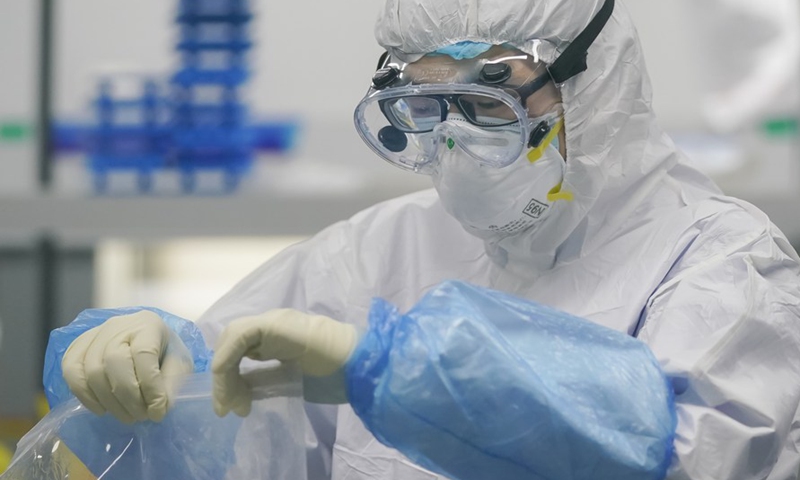 BEIJING, Aug. 18 (Xinhua) -- If the United States has nothing to hide, it should invite the World Health Organization (WHO) to conduct origins tracing investigations at its Fort Detrick and the University of North Carolina, Foreign Ministry spokesperson Zhao Lijian said Wednesday.

"This is the sincerity and attitude of a country who really cares about global origins tracing," Zhao said at a daily news briefing.

Zhao made the remarks when asked to comment on a report that the United States still intends to release the report on origins tracing as scheduled and make up misleading conclusions on virus-leaking from the Wuhan Institute of Virology, although there is not any tangible progress in the origins-tracing investigation by the U.S. intelligence agencies yet.

"China has always supported and will continue to participate in the scientific origins tracing. China has twice invited the WHO to China for joint research, which produced scientific and authoritative conclusions, laying the foundation for the next phase of global origins tracing. What we firmly oppose is politicizing COVID-19 origins tracing," Zhao said.

"No matter how hard the United States tries to smear and falsely accuse others, it can't dispel the international community's doubts about U.S. biological laboratories all over the world," he added.

"The sites of U.S. labs are often the location where diseases such as plague, anthrax and MERS break out. According to U.S. media reports, the U.S. military carried coronavirus to Europe through a blood program in 2019 and civilian volunteers entering the U.S. military base in Italy in August last year became the earliest victims," the spokesperson said.

Media outlets quoted high-level officials of the U.S. government as saying that the origins-tracing investigation is not the purpose and that continuing to hype the investigation can exhaust China's diplomatic resources and increase U.S. leverage toward China.

Zhao said he noted relevant reports and that the words of senior U.S. officials are a confession of the U.S. manipulation for presumption with guilt.

"What the United States cares about is not facts or truth, but how to consume and malign China. Isn't the malicious intention of the U.S. side's political manipulation evident enough?" the spokesperson asked.

"The world will no longer be deceived by the old U.S. ploy of set-up with a vial of washing powder. Instead, the international community is getting more and more suspicious of the United States as it is sparing no efforts to smear China by all means. Is it trying to deflect people's attention from the questionable points and spotty track records of the bio labs at Fort Detrick? What is the United States trying to hide?" he continued.