CHINA US is the greatest threat to global strategic security, stability: Chinese envoy

US is the greatest threat to global strategic security, stability: Chinese envoy 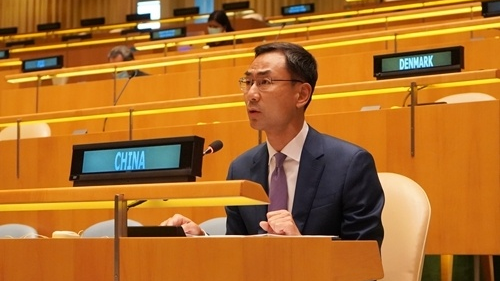 UNITED NATIONS, Oct. 9 (Xinhua) -- A Chinese envoy on Friday rejected U.S. accusations against China over COVID-19 and disarmament at the General Debate of the First Committee of the UN General Assembly.

In his statement, a U.S. representative made groundless accusations against China over COVID-19, and claimed that Russia and China are engaged in nuclear build-up.

Geng Shuang, China's deputy permanent representative to the United Nations, exercised the right of reply and rejected the accusations.

The U.S. representative spread "political virus" and smeared China over COVID-19, which is totally unacceptable, he said, adding that shrugging off responsibility cannot cover the mistakes the United States has made in combating the pandemic, and cannot fool the international community.

The United States, however, poses the gravest threat to global strategic security and stability, he said.

Multilateral arms control and disarmament concern international peace and security and the well-being of all countries. UN member states, big or small, rich or poor, strong or weak, have a responsibility and obligation to participate in the process on an equal footing. Unilateralism, exceptionalism, and bullying practices will get nowhere, he said.

As the strongest military power with the most advanced weaponry in the world, the United States has a special and primary responsibility in arms control and disarmament. "America First" should be converted to "compliance first, dismantlement first, and disarmament first," he said.

Geng asked the United States to participate in the work of the First Committee in an open, responsible and constructive manner, and work with other countries to ensure the success of the committee's work, promote international arms control and disarmament process, and safeguard global strategic security and stability.

The First Committee of the UN General Assembly deals with international security affairs such as arms control, disarmament, and non-proliferation. In First Committee sessions, member states will engage in the general debate and thematic discussions on various issues, including nuclear weapons, other weapons of mass destruction, conventional weapons, disarmament and outer space.